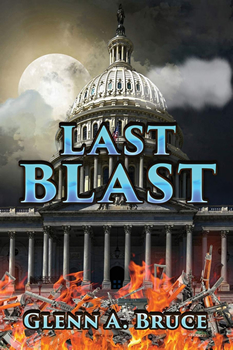 Inspired by what he sees as political absurdity, prolific screenwriter Glenn A. Bruce describes LAST BLAST, his 18th novel, as a “political horror story with humor.”

Political satire is traceable all the way back to classical Greece, with Aristophanes evoking “the comic genius of political criticism” and the playful clowning in Socrates’s subtle social critique. The tradition continues through acerbic Voltaire and down to the unfettered political satire of the social media era. Taking the Mickey out of otherwise serious commentary enhances its shelf life and dilutes pomposity at a time when self-righteousness abounds.

Bruce’s LAST BLAST is a dark, often comic look at how the federal government would function and Americans would react to a blanket ban on gun ownership. The “what-if” of extreme behaviors ranging from relief to joy to panic to violence, interact in LAST BLAST. Some gun owners are happy to turn over their weapons if it means a safer, gun-free America. Others will fight to the bitter end to maintain their “right to bear arms”— often with deadly results.

A shadowy plot to “do something” underlies the methodical American Gun Harvest. A chain of uncertainties culminates in the tense and exciting climax, when secretive dark forces converge on Washington to “finish what we started.” Whispers of a government-driven “false flag” permeate Washington’s mist—of an attempted coup, the real players and their intent, the hidden basement of an abandoned federal building in DC, a loner “idealist” from a compound in Idaho, and of the blissful ignorance of the well-meaning new President and his female VP.

David Billows, a mysterious ex-Marine, is on a mission to ensure the survival of constitutional America itself—but at what cost?

Bruce’s creativity has found outlets in several interrelated disciplines—he’s a novelist, screenwriter, playwright, poet, short-story writer, photo artist, video director, and teacher. He has had more than 50 short stories, essays, and poems published in the US, Britain, Canada, Australia, and India, winning awards for writing, screenwriting, and directing. Bruce began his career in Hollywood where he wrote the hit movie Kickboxer, episodes of Walker: Texas Ranger, Baywatch, the original G.L.O.W. Show, and sketches for Cinemax’s Assaulted Nuts.

The gun control political platform is flanked by the conflict between illusion and reality, language and meaning, semantics and action, and LAST BLAST grips this bull by the horns. As the author says: “Politics are duplicitous, and we probably never fully know what is going on under the surface… the ridiculous lengths to which gun fanatics will go to keep their erstwhile illegal guns is both astounding and ridiculous… I hope readers enjoy the wild ride, the action, the mysteries, and the humor to ease it on down the road.”

On gun control, Bruce comes out as an integrous realist.

Cognizant of the havoc wreaked across the United States by assault weapons, he would like to see a gun-control utopia, which is the idea at the heart of LAST BLAST. Bruce’s pursuit of idealism courageously acknowledges exigent ground realities in LAST BLAST, and therein lies his integrity.

Taking on such a subject with humor is always a challenge and an opportunity. The challenge, Bruce says, was “creating an entertaining read about a touchy subject while creating empathy for characters involved in political charades as well as citizens caught up in a huge government project that many hate.”

The opportunity “was to offer an opinion on the absurdity of gun nuts in America by telling an occasionally dark but humorous take on right-wing obstinacy over a silly line in their sand.”

As the story revealed itself to Bruce, he discovered that it was “possible to tell a kind of political horror story with humor” to inform and instruct by turning the politically sublimated on its head.

The tempo of LAST BLAST is helped along by the subtlety of overlapping half-truths, allusions, and inferences that create an atmosphere of uncertainty to ensure a gripping read: “At no point are we sure who is doing what, working for whom, or what the outcome will be.”

Bruce pays tribute to several authors who have influenced his writing and explains why:

“(Dashiel) Hammett because Red Harvest is perfect. The Magus (John Fowles) because it is mindbogglingly complex with endless twists. (Joseph) Heller because he found humor in war horrors with Catch-22. Chuck Palahniuk because he tells extremely dark stories that are immensely readable. (Kurt) Vonnegut because he infused humor in everything, no matter how sensitive or outlandish the topic. (John) Steinbeck because of his empathy and love of humanity in all its forms.”

Writing was a childhood passion for Bruce, even though he chose music as his first career. Later, Syd Fields’s screenwriting classes at Sherwood Oaks Experimental College re-awakened that love affair with writing. A perfectionist and a seeker of knowledge and excellence, at 62, Bruce enrolled in a Master of Fine Arts program at Lindenwood University to focus “on output and improvement, rather than college stuff… my heart and soul reside in writing fiction.” At Lindenwood he was associate editor for the Lindenwood Review, receiving an “Outstanding Alumnus” award in 2014.

Borne by his devotion to his craft, he doesn’t ask much from his writing environment apart from “dead quiet and a view outside to nature.”

And, of course, as a Florida resident, it is eminently fitting that he takes time out to play golf.

Just as LAST BLAST shows reality checkmating Utopia, perhaps the brooding silence of Bruce’s study with a view will launch a dystopian sequel?

Longtime WGA and ITW member Glenn A. Bruce is the author of He Rode, published by DSP Publications in December 2020 (with a contract for 1-4 more in two years), and LAST BLAST, scheduled for release on February 15, 2021, by World Castle Publishing. Glenn earned an MFA from Lindenwood University where he was associate editor for the Lindenwood Review and received an “Outstanding Alumnus” award in 2014. He has had over 50 short stories, essays, and poems published in the US, Britain, Canada, Australia, and India, and has won awards for writing, screenwriting, and directing. Glenn began his career in Hollywood where he wrote the hit movie Kickboxer, episodes of Walker: Texas Ranger, Baywatch, the original G.L.O.W. Show, and sketches for Cinemax’s Assaulted Nuts. Glenn currently lives in Florida, where he just finished writing his 18th novel.