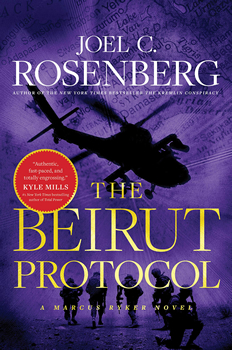 If you’re a fan of espionage fiction, you’re looking for that one book: the one where the CIA’s most valuable operative finds himself in the most dangerous situation he’s ever faced. Joel C. Rosenberg serves up that exact novel in THE BEIRUT PROTOCOL.

As the novel opens, the Secretary of State is on his way to the Middle East to help finalize a vital new peace treaty between Israel and the Saudis. Ahead of him, Special Agent Marcus Ryker is leading a team to the Israel-Lebanon border. But Hezbollah forces ambush them. At first the terrorists don’t know who they’ve got. Ryker is, in fact, a quiet killer with many enemies.

“The Iranians want to kill him,” Rosenberg says. “So do the Russians and the North Koreans. But despite the fact that he’s 6’2″ and about 175 pounds, you might not even notice him at a cocktail party. He makes it a point not to stick out in the crowd. That’s not just his personality. It’s his training.”

Ryker is a clandestine CIA officer. His cover is as a Special Agent for the Diplomatic Security Service, the branch of the State Department that protects American and foreign diplomats and dignitaries. This is after his time in the Secret Service on the Presidential Protective Detail and multiple combat tours as a Marine in Afghanistan and Iraq. With that background, it’s interesting that he doesn’t see himself as a hero. 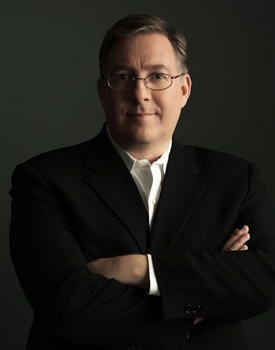 “He’s highly uncomfortable getting any attention—much less kudos—at all,” Rosenberg says. “He doesn’t want praise. He doesn’t want attention. He prefers to work in the shadows, protecting his nation’s leaders, secrets, and freedoms.”

The President can ill afford a new war in the Middle East that could kill the treaty. Israeli and American forces mobilize to find the hostages, but Ryker knows time is running out. Like all of Rosenberg’s novels, the tension feels authentic, even though his stories don’t reflect real political changes because, since his first novel, he’s been creating an alternate universe.

“It feels real,” Rosenberg says. “It feels ripped out of today’s headlines, or maybe tomorrow’s. But there are significant differences between real life and the political and geopolitical environment I’m creating.”

So the story in THE BEIRUT PROTOCOL is completely fictional, but Rosenberg admits that the opening scenes in which Ryker and his team are ambushed by Hezbollah terrorists and dragged behind enemy lines were inspired by real ambushes that have taken place on the Israel-Lebanon border, one of which triggered a war in 2006. 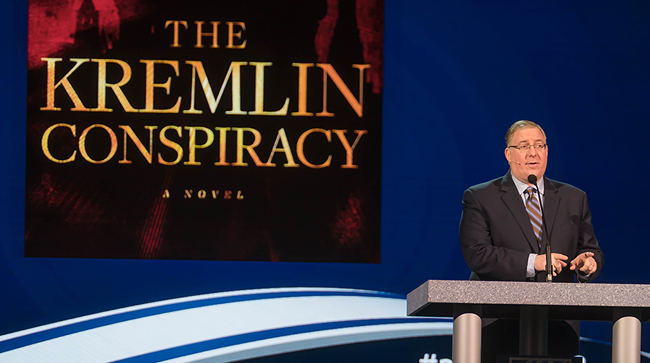 Rosenberg delivers a keynote address to the National Religious Broadcasters convention in Nashville, Tenn., in March 2018.

To Rosenberg, character is king in any political thriller, as is the “what if?” scenario—but the settings are absolutely critical to his stories.

“I’m trying to take my readers into very dark places—Russia, North Korea, the inner sanctum of the Iranian regime, and so forth. I want to show people where evil festers and then metastasizes like a cancer,” he says. “So like they say in real estate, ‘location, location, location.’ I want to take my readers where they would never dare go on their own. As I was thinking about where to take Marcus next, I wanted to pick a country and a scenario that I hadn’t really explored in the past. Lebanon came to mind.” 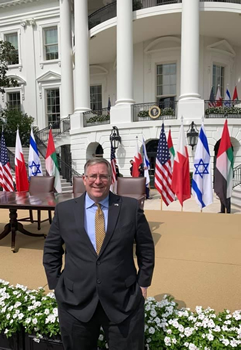 Rosenberg at the White House for the September 2020 Abraham Accords signing ceremony, which he covered for All Israel News

In his first three novels—The Kremlin Conspiracy, The Persian Gamble, and The Jerusalem Assassin—Rosenberg established Ryker’s backstory and showed how he got pulled into working for the CIA against his will. In those books you see Ryker’s character, his values, and his incredible professional skill sets. But as he started the fourth book, Rosenberg began to wonder what it would look like if Ryker was taken hostage.

In the author’s words, “Now that we know why Ryker is considered one of the most deadly and effective clandestine operators in the CIA, wouldn’t it be interesting, I thought, to take away all of his strengths, or at least neutralize them for a while? How would Ryker react to being taken captive? To his team being captured? To suddenly finding himself in a seemingly inescapable situation?”

Ryker knows that when Hezbollah realizes who they’ve captured, no amount of ransom will save them. They’ll be sent to Beirut and then to Tehran to be executed on live television. Making Ryker a hostage not only challenges his training, it tests his character. By nature, Ryker is a protector. He is not looking to kill people. His passion is to protect people. 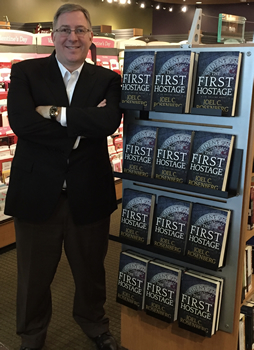 “He’ll kill without hesitation,” Rosenberg says, “but only if he has to. In THE BEIRUT PROTOCOL, he’s put in a situation along the Israeli-Lebanese border in which he has responsibility for the protection of his team. What if he was suddenly overwhelmed by superior firepower? What if he found himself in a position where those on the very team he was sworn to protect were wounded? What if they were being beaten and tortured? All this would scramble his thinking and work against his instincts. Even if he manages to find a way to escape, how will he do it with severely wounded and immobile colleagues? Should he try to escape on his own and go get help? Or is he morally obligated to stay with his team? After all, if he does escape, won’t his teammates bear the brunt of the inevitable retaliation?”

The answers aren’t obvious because Ryker doesn’t fit the classic thriller-hero mold. He’s not a James Bond-type super spy, but nor is he a George Smiley-style tradecraft master. 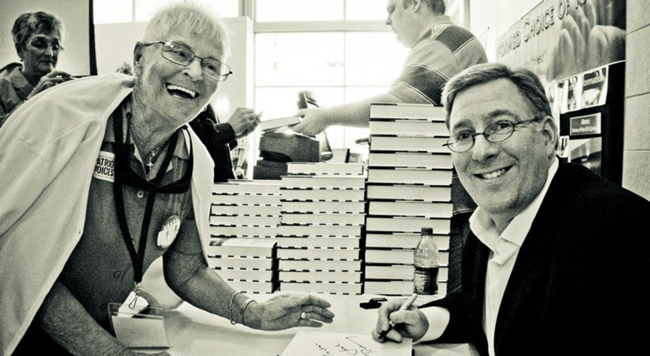 Rosenberg signs a book for a fan.

“Yes, he works for the CIA,” Rosenberg says, “but he’s not a classically trained spy. He’s not an assassin, or a vigilante. He’s a widower. He was a father, but his son was murdered. He left government service and never planned to go back, but now he’s been pulled back in. That’s what makes Marcus Ryker a complicated character and perhaps an outlier in the genre.”

Bottom line, Marcus Ryker is a character you want to get to know, and THE BEIRUT PROTOCOL is a great place to meet him.