Easing Back into the Genre 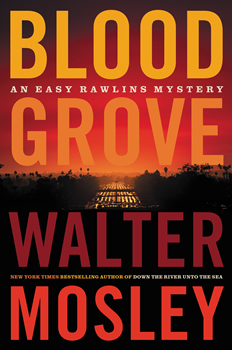 Readers who have been waiting for a new Easy Rawlins novel will cheer the arrival of BLOOD GROVE. The latest novel from Walter Mosley has both the broad scope and the thought-provoking insight we’ve come to expect from this master of his craft.

In the protest-heavy year of 1969, a White Vietnam veteran walks into the new offices of Black private investigator Ezekiel “Easy” Rawlins. At first the vet’s story doesn’t make much sense. He and his woman were attacked on the outskirts of Los Angeles. The veteran thinks he may have killed a man, and both his lover and his dog have disappeared. Not a case any detective would really want.

But we know Easy. After three decades of mysteries solved, he’s more than an iconic detective. He’s an old friend. Even the man who created him says that if there’s anything readers don’t know about Easy, he probably doesn’t know it either.

“One of the reasons I love writing about Easy,” Mosley says, “is that I discover his beliefs, tics, and his flaws as we travel through the years. I wouldn’t have it any other way.”

Although Easy is inclined to turn the veteran away, he takes the case because he recognizes how damaged the vet is from his experiences in the Vietnam War. Easy, a war veteran himself, feels a connection with the younger vet. This is the Easy Rawlins we’ve known for years, although the character has grown. The years have made him older and a little wiser.

“He knows that he can lose,” Mosley says. “He knows his own flaws. But what makes Easy a good detective is that he doesn’t know how to quit even when he wants to. His love of his people, family, and friends keeps him in the street looking for some kind of justice.”

Easy’s debut, Devil in a Blue Dress, is an atmospheric noir novel set in 1948. Easy has lived through all the years between then and his latest adventure in 1969. Every author strong enough to keep a series going has to choose whether or not to freeze his or her character in a time period and decide if that character will age. Mosley has chosen to let life move on for Easy because, he says, it’s not all about the character.

“I’m not so much writing about a character as I am writing about the world that character thrives in,” Mosley says. “If I stayed in a certain period, or a certain place, the stories would become either rote or comical. Don’t get me wrong—I like it when stories become familiar. I’m just uninterested in writing them.”

Perhaps readers feel so blessed that Mosley has written another Easy novel because he does have a choice. Let’s face it: the man can write any genre and do it well. But luckily, crime fiction might just be his favorite.

“I like all the various genres of storytelling,” Mosley says, “and so I am forever returning to all of them. Crime fiction has the broadest palette of readers, and it’s fun to have such a wide-ranging audience.”

In addition to turning out an ongoing parade of great stories, Mosley also teaches others the craft he has mastered. Why would he sign up to teach master classes in storytelling? It seems he just loves to talk about the things he loves.

“Writing is way up on the list of activities I adore,” Mosley says, “so teaching what I know about writing is always a pleasure. But—I love writing more than teaching and so sometimes the two come into conflict. I taught the Masterclass so I could do both things at once: writing my books while people are somewhere taking my class.”

I used the word iconic to describe Easy Rawlins and not just because of his longevity or the quality of his stories. Easy showed the world the importance of cultural diversity in popular literature. Having the vast variety of humans represented in fiction is vitally important, and no one has explained why as well as Easy’s author.

Mosley says, “If somebody asks you about your personal history and you leave out the uncle that lives with your family, the man down the street that helped you build your house, the mechanic that fixes the car you drive to work, and the immigrants that provided the foundation of your world. . . If you forget all that then your rendition of a history is a lie, even if you believe in its veracity.”

BLOOD GROVE is both a mystery and a thriller. It is also a stirring view of California in the late ’60s, complete with all the grifters, police, hippies, radicals, tycoons, and sociopaths you could have met there. It also features all of Easy’s fascinating friends. Mouse is back, of course, as well as Jackson Blue, Fearless Jones, and Christmas Black. Even Easy’s adopted daughter, Feather, appears with some family drama. Perhaps most important, it features Easy Rawlins’s unending search for justice.

Yes, I am excited that he’s back. You will be too.