A Dark and Intriguing Debut 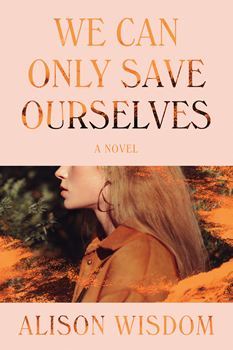 Alison Wisdom’s dark debut WE CAN ONLY SAVE OURSELVES is an original and intriguing read. It’s the story of Alice Lange, the seemingly “perfect” suburban teen who is tempted from her life and radicalized by Wesley, a violent and controlling man. Alice joins his household of other young women, a group where his word and wishes are absolute. As Alice becomes more and more subsumed into her new life, her old one back in the suburbs is shaken to the core by the loss of one of their own. Tension rises inexorably along with Wesley’s demands, leading to terrible tragedy.

It would make for gripping reading at any time. But with the recent eruption of murderous political violence in the United States, it feels especially prescient. Urgent answers are needed about the cause of domestic radicalization and the issue of cult adherence.

“I have always been fascinated by cults,” says Wisdom. “And particularly the power of groupthink. I went to college at Baylor University, which is in Waco, Texas, famous for being the home of the Branch Davidians, and because the school’s population is largely homogenous (White, wealthy Christians), I saw firsthand, on a lesser scale, how that sameness can really do a number on a person and how they see the world. When I graduated and entered ‘the real world’ again, I had to undo some of the thinking I had learned in the past four years. I knew I wanted to explore that in my writing, so I did a lot of reading about specific cults.”

She started out by writing a novel with three different storylines, each one about a woman in a different cult. Part of her research looked at the Manson family. “I was struck by a claim that asserted the Tate/LaBianca murders marked the end of the 1960s both as an era and as an ideology—the Vietnam War was happening overseas, so people were confronted with death and violence, but it was at a remove; when Charles Manson and his Family killed, first Sharon Tate and her friends and then the LaBiancas, an ordinary couple, suddenly death and violence were much closer to home. Being famous couldn’t save you; being normal couldn’t either.”

Events in her personal life changed the direction of the novel further. Wisdom had become a new mother, which caused a shift in her perception of safety and danger in the world. “I could only protect my children so much. The sense of control I tried to retain was an illusion.” That realization had her go deeper into the Alice Lange storyline. “I imagined her running away from her little sanctuary, and the effect it had on the mothers of her neighborhood, as a microcosm for that sense of security and control giving way.” That storyline was the one that became WE CAN ONLY SAVE OURSELVES.

Wisdom does a great job in exploring how the unpleasantly charismatic Wesley exerts his own particular brand of control on the women in his household. Through the backstories of the women, she also examines why he is so successful. “Cults are predatory,” she explains, “and they prey on people who are vulnerable: they might be unhappy or dissatisfied somehow, or they may be experiencing something much deeper and even more painful, and a cult is suddenly appealing because it looks like a way out. Suddenly, you belong somewhere, you have purpose, you have answers to questions you’ve been asking.”

Those issues have never been more current. “I’ve been thinking a lot about the rise of QAnon. Currently, we’re in a political climate with lots of people feeling unmoored, and this is fertile breeding ground for fringe groups and cults. I think cults appeal to very fundamental human desires: the desire for acceptance, the desire to be special and set apart, the desire for a framework to understand the world. I don’t think there’s a real way to combat those wants, but I think we can look out for the people in our lives who are vulnerable in some way, who may be desperate and searching. And of course, it always helps to be actively seeking relationships and dialogues with people who don’t view things the same way as you.”

Novels like Wisdom’s debut also help with understanding what might be happening. The bewilderment of the suburban women left behind echoes a broader incomprehension for many people right now. We hear the women’s voices in the first-person plural, which is an unusual device that works extraordinarily well, giving the reader a sense of the gossip and conjecture that is often such a feature of seemingly idyllic, tightly knit communities.

All of these challenges aside, Wisdom is on to her next projects. “I mentioned that WE CAN ONLY SAVE OURSELVES came from a novel that originally had three storylines, each one about a woman in a different cult. I have two more storylines that would love a novel of their own, so I’m working on that. One is about a woman living in a fundamentalist religious community in small-town Texas, and the other is in just about the earliest stages you can imagine and takes place on a haunted commune. I like to think of these books as a trio, not a trilogy, because they will all stand alone, but are definitely linked by certain thematic aspects.”

Dark themes for Wisdom once again, but ones from which society can’t afford to turn away. “My hope is that reading all three of them together will illuminate those things in a rewarding, fulfilling way.”