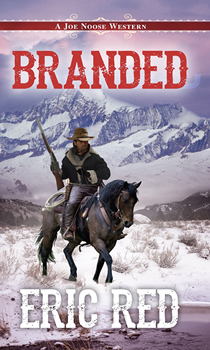 A new kind of evil has come to the Old West, a killer as cold and hard as the Wyoming winter. He wanders from town to town, slaughtering entire families along the way. With grotesque glee, he brands the letter Q in his victims’ flesh.

Joe Noose knows the killer’s identity, he recognizes the killer’s brand because he bears the same scar from his childhood—and he’s determined to stop this madman once and for all. Two US Marshals have agreed to help Joe, but they’ve never hunted a killer like this before, a sadist who kills for pleasure—and scars you for life.

Eric Red is a Los Angeles-based novelist, screenwriter, and film director. His films include The Hitcher, Near Dark, Cohen and Tate, Body Parts, Bad Moon, 100 Feet, and The Last Outlaw. He’s written nine novels, including Don’t Stand So Close, It Waits Below, White Knuckle, The Guns of Santa Sangre, The Wolves of El Diablo, Noose, Hanging Fire, and BRANDED. Red divides his time between California and Wyoming with his wife and two dogs.

The Big Thrill had a chance to ask the author a few questions about his latest release.

The setting of Jackson Hole, Wyoming, in the 1800s is a constant throughout the book series (this is the third novel) so that was a given, but the characters sprang out of the plot. 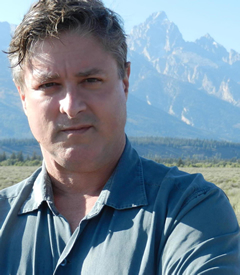 The biggest challenge the book presented was in creating a modern mystery thriller set in the Old West that had sufficient narrative propulsion and twists for contemporary readers.

What about the greatest opportunity?

The biggest opportunity was injecting those same elements into a classic western novel.

John D. MacDonald, above all other authors, for his style of writing, his storytelling skills, and versatility in different genres. Michael Connelly for his talents in writing realistic police procedurals. Jeffery Deaver because he’s a master of the plot twist. Thomas Harris for his horrific genius at creating one-of-a-kind villains in unique plots. Alistair MacLean for exciting you-are-there adventure narratives.

Why write a violent serial killer thriller as a western?

Because I believe the western is the ultimate genre, whose classic elements can be found underneath most modern thriller and crime novels, and the genre has the flexibility to absorb most other genres into its universal nomenclature.

I’ve reached out to the thriller, suspense, and horror fans of my movies and other novels, because BRANDED delivers the visual thrills they expect while hopefully drawing them into the western genre as well.

I was able to utilize my film production resources to produce a trailer, now online.

I also started an official Facebook page for the Joe Noose Western series.

I’ve promoted the book in Jackson Hole where the novels are set. There is a historical element which gives those readers a sense of pride.

I recently completed a contemporary mystery novel about a hard-boiled female LA private eye called Snoop that revolves around the movie business, a world I know intimately. Snoop is a traditional PI book, undated for our current attitudes. This gave me an opportunity to write about a business I’ve known intimately for 30 years and the PI’s love/hate outlook about it mirrors my own.

Eric Red is a Los Angeles-based novelist, screenwriter, and film director. His films include The Hitcher, Near Dark, Cohen and Tate, Body Parts, Bad Moon, 100 Feet, and The Last Outlaw. He has written nine novels, including Don’t Stand So Close, It Waits Below, White Knuckle, The Guns of Santa Sangre,The Wolves of El Diablo, Noose, Hanging Fire, and BRANDED. Red divides his time between California and Wyoming with his wife and two dogs. Find out more about Red and his books and films on his official website EricRed.com, on Facebook at OfficialEricRed, and on Twitter @ericred.