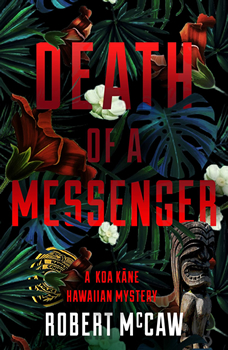 Set on the island of Hawaii, DEATH OF A MESSENGER opens with an anonymous 911 caller reporting a body at Pohakuloa, the Army’s live-fire training area. Hilo Chief Detective Koa Kane, a cop with his own secret criminal past, finds a mutilated corpse—bearing all the hallmarks of ancient ritual sacrifice.

He encounters a host of obstacles as he pursues the murderer—an incompetent local medical examiner; hostility from both non-native White haoles and sovereignty advocates; and a web of lies. Koa races to discover whether the victim stumbled upon a gang of high-tech archaeological thieves or learned a secret so shocking it cost him his life and put others in mortal danger.

Will Hilo’s most respected detective stop this sadistic fiend—or will the Pohakuloa killer strike again, with even deadlier consequences?

Chief Detective Koa Kane also features in Robert McCaw’s Fire and Vengeance and Off the Grid. While Koa Kane is a seriously flawed character living under the shadow of violent revenge for his father’s murder, McCaw says, “He has learned from his crime and seeks redemption through his devotion to finding justice…redemption is possible after a terrible crime, if one acknowledges wrongdoing and genuinely devotes oneself to making amends.”

This is a major theme in McCaw’s writing, the others being abuse of authority, governmental corruption, and “the compulsion to cover up perceived past misdeeds (that) might, after sex, be the second strongest motivation in human behavior.” 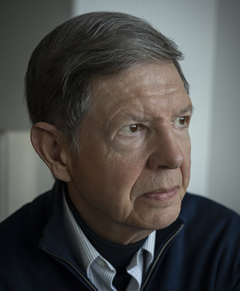 McCaw grew up in a military family, traveling the world. A graduate of Georgetown University, he served as a US Army lieutenant and earned his Juris Doctor in law from the University of Virginia. Being a judicial clerk for Supreme Court Justice Hugo L. Black allowed him to “participate in a number of high-profile events (such as) the Pentagon Papers case.”

In the 1980s, he went through his own James A. Michener infatuation with Hawaii and “felt a compulsion to share my discoveries and … found myself telling the story of Hawaii through a murder mystery (and) … the various threads of my life came together.”

A partner in a major international law firm in Washington, DC and New York City, McCaw represented major Wall Street clients in complex civil and criminal cases. Having lived on the Big Island of Hawaii, he says his “… stories are steeped in Hawaiian history, culture, lore, and language.” He now lives in New York City with his wife, Calli.

Always “fascinated by puzzles,” McCaw says that “solutions to complex mathematical problems was a big high.” He also confesses to being “hooked on astronomy.” His second home in Hawaii provides ample opportunities to indulge in that hobby, in addition to opening the corridors of “history, language and culture.”

He doesn’t write to a formal outline, but “I usually know where I am going to start and where the story will end. I may also have ‘waypoints’ in mind from early in the writing process. The rest of the story develops as I write.”

He has been influenced by some of the most eminent plumes in fiction.

“I read a lot of fiction and find inspiration from many authors. James A. Michener and others inspire me to turn the setting into a character in the story. Michael Connelly, Daniel Silva, and many others have taught me about the characterization of protagonists, police officers, detectives, and wrongdoers. Delia Owens writes with a degree of detail and grace I can never hope to achieve. Barry Eisler’s use of Japanese in his John Rain novels has served as a model for my incorporation of Hawaiian words. Dean Koontz displays an imagination in Watchers that I can only dream of achieving. Tony Hillerman serves as inspiration for describing a little-known culture.”

McCaw’s creative imagination and craftsmanship easily adapt to whichever environment his frequent travels might take him. He can write wherever he happens to be. “Modern technology and software—the latest Scrivener software, running on a MacBook Pro—make researching, drafting, and editing on airplanes, in hotel rooms, and at the beach a delight. Scrivener is especially valuable for focusing on individual sections of multipart stories before integrating them into a single narrative.”

A perfectionist, he self-edits “all the time,” and deals with writer’s block by “walk[ing] away for a day or two and then outlin[ing] three, four, or maybe as many as ten different solutions…”

Asked how he spends his spare time, McCaw says: “I seek new experiences and enjoy meeting new people, some of whom become the basis for characters in my books. Travel with my wife probably heads the list, with a recent trip to Antarctica at the pinnacle. Visits with family are in this category, too. Grandchildren rarely fail to provide new experiences. Mine recently took me to an ‘escape room,’ which was a unique and fun experience. Exercise while listening to books on tape is always invigorating. And I’m sort of a foodie, having enjoyed lots of cooking classes over the years.”

McCaw’s Koa Kane series of thrillers have enthralled his loyal readership. His fourth novel in the Chief Detective Koa Kane series, Treachery Times Two, to be published by Oceanview in 2022, should continue to uphold the ethos of his writing.

Robert McCaw is the author of Fire and Vengeance, Off the Grid, and DEATH OF A MESSENGER. McCaw grew up in a military family, traveling the world. He is a graduate of Georgetown University, served as a US Army lieutenant, and earned a law degree from the University of Virginia. He was a partner in a major international law firm in Washington, DC, and New York City, representing major Wall Street clients in complex civil and criminal cases. Having lived on the Big Island of Hawaii, McCaw imbues his writing of the Islands with his more than two-year love affair with this Pacific paradise. He now lives in New York City with his wife, Calli.