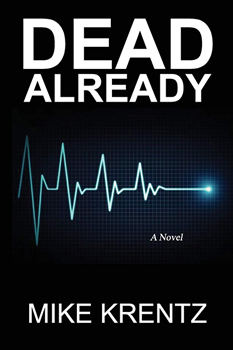 Besides the medical action, DEAD ALREADY has ER physician Zack Winston joining up with case-hardened defense attorney Bridget Larsen to battle a malicious malpractice suit. They uncover a conspiracy that trades in prescription drugs and murder-for-hire. Inspired by memories of his dead wife, Noelle, Zack must deal with his blighted past and overcome a mentor’s treachery to find the truth as his and Bridget’s lives hang in the balance.

The medical scenes and the character of Zack Winston in particular ring true thanks to the experience and expertise of the author.

“As I tried to portray in Dr. Zack Winston, ER doc is what I am—no matter what else happens in my life. Although I left clinical practice many years ago, I’ve remained an emergency physician in my mind, heart, and soul,” Krentz says. “Writing the novel put me back in the ER, and I loved it. Some past clinical experiences remain as vivid now as when they occurred, and a few are portrayed in the book. Emergency medicine practice fosters a certain mindset that becomes ingrained in your personality. You develop intuition that allows you to sift through a problem, recognize the important parameters, and react with knowledge and confidence. You become facile in risk mitigation, managing unavoidable risk, and remaining calm in a crisis.

“Whenever I finished working a busy ER shift, I seldom worried about the critical patients I treated. I often wondered, ‘What did I miss today? Whom did I send home that I shouldn’t have?’ That became my inciting incident for DEAD ALREADY. A patient discharged the day before returning in full-blown cardiac arrest. Any ER doc’s worst nightmare. But what if it’s not the doc’s fault? From there I was off and running with the rest of the story.” 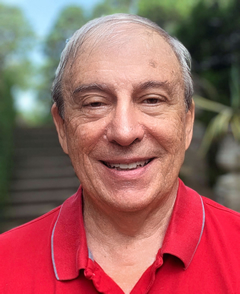 “Lack of familiarity with recent scientific advances and current standards since I left clinical practice became my biggest challenge,” he says. “I shared the manuscript with a friend and former colleague still in active practice. He brought me up to speed on the changes in clinical standards of care that affected the novel, and also the current medical/legal milieu.”

“I research in two phases: the big rocks before I start writing to be sure my idea is feasible and the detailed, focused research as I am writing. “

Krentz acknowledges that Zack Winston was the most difficult character to write in DEAD ALREADY. Even so, it is this character that led to the decision to make DEAD ALREADY the first in a series of medical mysteries.

“Zack’s character, lovable as I hope he is, suffers significant flaws. His character arc progresses through DEAD ALREADY, but he’s not done yet,” Krentz says. “He has much to learn, especially about relationships (an all too common flaw in physicians and other professionals). Also I have too many clinical scenarios yet to write, and they would not all fit in one story or even two. I decided on the series early in the process, but didn’t cement the idea until I got through the first draft.”

Krentz’s current work-in-progress is the sequel to DEAD ALREADY with a working title of Warm and Dead, which emergency medicine folks will recognize as a reference to cold-water near-drowning. He just completed a standalone psychological thriller that he hopes to sell after the holiday breaks.

With his own life experiences underlying his writing DEAD ALREADY, and perhaps the current situation with COVID-19, Krentz has a special place for medical personnel.

“Especially with the publicity surrounding medical care in the current pandemic, I hope readers can understand that the emergency doctors, nurses, and other professionals they see are real humans who bear their own personal or professional burdens,” he says. “When dealing with and treating fellow humans, we must compartmentalize our own issues and give full focus to the person who seeks our care. It is a sacred trust. Sometimes we fall short. Then we pick ourselves up and go on to the next patient, all the time striving to do our very best for everyone.”

Writing is notorious for being a solitary endeavor, yet each writer enjoys the support of others. For Mike, the Muse Writers Center in Norfolk, Virginia, provided support and mentoring through the various studios and seminars they offer. They played a significant role in getting DEAD ALREADY to publication. He also credits the Hampton Roads Writers Organization and its annual writers conference that draws high-quality faculty, agents, and editors.

In addition to organizations, Krentz’s work has been shaped by a number of authors. Those who influenced him the most are “from the standpoint of superior literary craft, John Irving. For thrillers, David Baldacci, Michael Connelly, Greg Iles, and Karin Slaughter, among others. For medical fiction/thrillers, Michael Crichton, Tess Gerritsen, and Michael Palmer, plus two ER doc/authors, CJ Lyons and Kimmery Martin. Legal thrillers, John Grisham and Scott Turow.”

His free-time endeavors include reading. “I always love a Karin Slaughter book,” he says. “When I’m not reading thrillers, I try to branch out. For example, I enjoyed American Dirt, Little Fires Everywhere, and Mexican Gothic. As a dog lover, I like Paula Munier’s Mercy and Elvis mystery series.”

Krentz’s Flagship Series portrays the lives of servicemen and women, their challenges and interactions, and their wounds—physical and emotional—that evolve into professional and personal conflicts more daunting than combat. Can essential human relationships survive such brutal demands on hearts and souls?

His medical suspense novel, DEAD ALREADY, transports the reader into the stressful environment of emergency medicine, where life battles death amid terrified screams, plaintive whimpers, and shouted orders, where fallible humans strive to postpone death, restore life, or eliminate misery. These would-be heroes sometimes fail. They suck it up and move on to quiet a frightened child, relieve pain, straighten a broken limb, repair a laceration, or reassure the worried well. What evil might lurk amid such chaos?

Born and raised in Arizona, Krentz earned a classical degree in English from the University of San Francisco, a Doctor of Medicine degree from the Medical College of Wisconsin, and a Master of Public Health Degree from Johns Hopkins University.