Listening to the New Call from the Universe 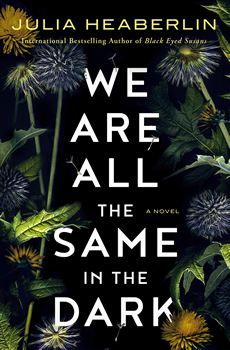 ‘’You can’t explain the magical process of building a plot that is not imagined ahead of time. It’s a wild horse that comes out of the pasture every day to play and tease.’’

That was Julia Heaberlin’s answer when asked how she approaches writing her internationally bestselling psychological thrillers, the latest of which is WE ARE ALL THE SAME IN THE DARK.

It’s not a stretch to say that Heaberlin’s wild horse is still roaming free, this time playing with and teasing the reader. Set in a small Texas town, WE ARE ALL THE SAME IN THE DARK is a tense, complex, satisfying thriller that grabs from the first page and doesn’t let go until the last.

The novel starts with two mysteries, that of the disappearance of Trumanell Branson a decade ago and the discovery of Angel, a mute girl with a missing eye who has been found abandoned in a field. The connections between the two become ever closer in the building suspense. Both Trumanell and Angel have intriguing, harrowing backstories that are gradually revealed to the reader through the determination of the town’s youngest police officer, Odette Tucker.

They are all vividly imagined characters drawn from Heaberlin’s life experience. “My heroines are an ode to all of the fierce, kickass Texas women I have known since I was a child,” she says. “And I’m in there, too—dark pieces of myself I didn’t know existed. Writing is intense therapy. I always tell kids (and adults) who doubt they can write, ‘You don’t know what’s in there.’” 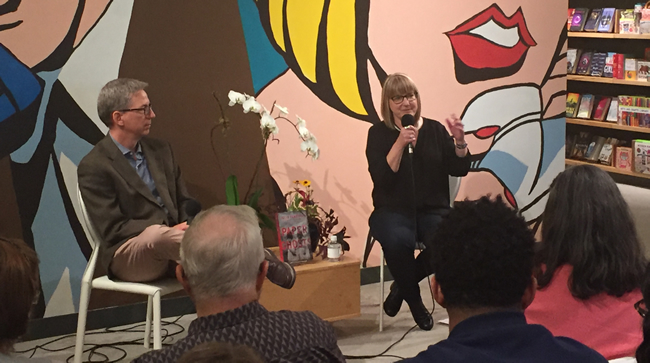 Heaberlin is interviewed by KERA News’s Rick Holter at the Paper Ghosts launch hosted at Interabang Bookstore in Dallas.

Heaberlin says it’s her characters that propel the ideas in her books. “They always start to haunt me before the plot. There’s a visual first. In the case of WE ARE ALL THE SAME IN THE DARK, it was a girl blowing dandelions on the side of a road near a small Texas town, making wishes. She was sunburned, in a white dress, and only had one eye. This was all I knew when I sat down to write.”

That approach has its challenges. “I’m not an outliner. There are plenty of times in my life I have wished for a whiteboard with every chapter outlined. Because when I come to the end, there are always very complicated bows to finish tying. But on the best days, it’s a wonderful rush.”

Heaberlin signs Paper Ghosts with the twins from Fort Worth, Texas, who posed for the spooky cover. (Yes, she had the girls sign, too.)

One of those best days brought the twist in the middle of this book, which, she says, “slammed me out of nowhere.” The risk of spoilers prevents further comment, other than to say it has an effect on the reader, too.

Heaberlin’s evocation of the world of a small Texas town and its landscape is remarkable. Her ties to the location are deep.

“Even when I lived in other places, I feel like I have worn Texas like a second skin,” she says. “And during the pandemic, I have kept my sanity sometimes by going out and standing under a big sky. This state’s people are as diverse and complicated as the landscape—I never stop being surprised. But no matter what, I think every Texan would say that there’s some invisible DNA that connects us.” 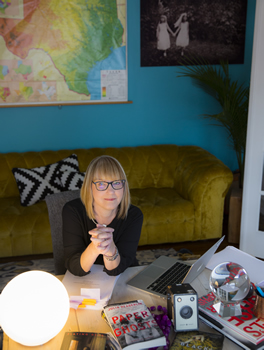 Heaberlin’s use of language to convey not only the setting but the internal worldview of her characters is masterful and poetic. She doesn’t write poetry herself but will often read it whenever her writing is stuck. “Poetry opens every single door and window. There are no rules for description or storytelling. Words and thoughts can be beautiful and make absolutely no sense. I would not want to live in a world without poets. I bow to them.”

There is also a strong true crime flavor to the novel, which makes it especially gripping. Heaberlin was, for many years, an award-winning journalist and editor at various newspapers and had a special interest in covering true crime.

“As a journalist, I was always more interested in how life played out after a traumatic crime—revisiting the people involved years later,” she says. “This has definitely carried over to my thrillers.” But she acknowledges that there are still major differences between the two writing disciplines. “The actual writing of fiction vs. fact-based journalism—those are two very different skills. I had to dump my ego and start over when I changed careers. Or maybe my ego dumped me.”

One aspect that hasn’t left her is her approach to research. “I’m also a little obsessive that my research is accurate—what it’s like to wear a prosthesis, stand outside the Texas death house, or use mitochondrial DNA to identify old bones.” 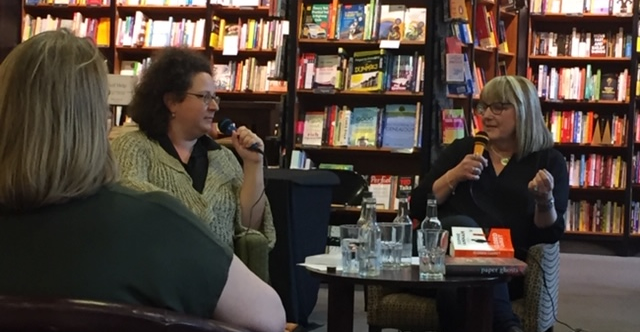 In WE ARE ALL THE SAME IN THE DARK, one of the heroines is an amputee and wears a prosthetic leg. Heaberlin’s research on this issue helped to shift her perspective.

“For starters,” she says, “‘disabled’ or ‘differently abled’ are not words or terms I will ever use again. Interviewing real women and men who wear prosthetics redefined my ideas of physical beauty and strength in a way I didn’t expect: the former cop with an amputated leg who teaches SWAT classes; the popular and athletic influencer who lost an eye and an arm after walking into a helicopter blade and is really most frustrated when trying to hammer a nail to hang a picture; the teenager who wears an ocular prosthesis so perfect that she says keeping it a secret ‘is not that hard.’ Not one of them wants to be defined by what they are missing. Who does? We are all just people trying to make sense of our place in the world. We all have something missing.”

As for what’s next for wordsmith Heaberlin, she’s been doing what she calls her personal pandemic writing class.

“I recently dissected The Silence of the Lambs, trying to figure out if I could apply any of its lessons to my very different style of thriller writing. Thomas Harris is not a ‘slow burn’ kind of guy,” she says. “I don’t know if he is a fan of Emily Dickinson. But in my next book, I’d like to take some cues from the master of pacing and dialogue. And like everybody else, I’m listening to a new call from the universe.”