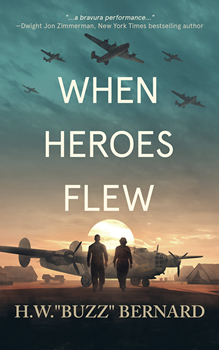 Former Weather Channel senior meteorologist H. W. “Buzz” Bernard is best known for his thrillers related to weather disasters and other natural phenomena. This time around, he has turned his attention to the skies in a new way, writing about a World War II bombing raid in his new historical thriller, WHEN HEROES FLEW.

The novel tells the story of Operation Tidal Wave on August 1, 1943, when more than 100 Allied bombers lifted off from a desert airfield to attack oil refineries in southern Romania, which was then an important oil-producing center for Germany. The raid required a flight of around 1,000 miles while passing over the width of the entire Mediterranean—in itself quite a feat given the technology available almost 80 years ago.

Although the raid was deemed a military success, the cost was great, with nearly half of the planes lost along with their crews, and more than 300 killed on the ground.

In the pages of the novel, Bernard has humanized the story of this remarkable raid.

“I want readers to be in awe of the extraordinary valor and courage exhibited by the Greatest Generation—when they were mere young men and women—in the face of prohibitive odds as they mounted an air attack on Nazi oil facilities in Romania during WWII,” he tells The Big Thrill. “In the particular bombing raid featured in this book, there were five Medals of Honor awarded, the most ever for a single action on a single day. Of the 178 B-24 bombers that launched out of Libya to strike the target, only half made it back in the immediate aftermath of the raid.”

Bernard notes the “absolute bravery and courage” of these young aviators, who knew they probably wouldn’t be coming back. “They knew the odds of survival were virtually nil,” he says. “It’s hard for me to imagine being a young man and being willing to sacrifice your life. It just boggles my mind.”

The novel focuses on a single crew aboard a bomber nicknamed “Oregon Grinder.” The genesis for the novel was a short story that received accolades in an international competition.

“That was the story that the novel grew from,” Bernard notes. “I wanted to try to tell the story from the viewpoint of a single (American) crew and one (German) fighter pilot.”

The focus on the German Luftwaffe pilot helps to give a very human portrait of the opposition. “I can tell you that while the Luftwaffe was dedicated to defeating the enemy, the Allies, many Luftwaffe officers were not Nazis and lived by their own code of honor, not that of the Nazis,” he says.

Part of Bernard’s insight into the Luftwaffe character came from his own time spent in Germany—and from his late wife, Christina, who was born there: “The stories that my wife told me about growing up in Germany during the war gave me something else that I could craft a story around.”

For readers, something else that makes WHEN HEROES FLEW stand out is the attention to detail regarding the planes themselves, and what it was like to fly one.

Bernard gleaned some air combat experiences from friends who flew fighters in Vietnam, where he did two tours of duty as part of his 30-year military career. He eventually retired as an Air Force colonel. Although he describes his role as “support,” he says that being around aviators for so many years has helped to inform his fiction. In fact, some readers mistakenly believe he is a pilot because of the aviation details.

Although Bernard has not been at the controls of a plane, he has flown as a meteorologist on a “Hurricane Hunter” aircraft. For his research into WHEN HEROES FLEW, he did take a trip on a WWII-era B-24 in the skies over South Carolina. He says the experience was not only amazing, but helped him as a writer to get the smells, sounds, and sights just right.

“I do try to get it technically correct,” he says, explaining that he has pilot friends vet those details. “I want it to be real.”

Anyone who has toured a WWII-era plane is immediately struck by the sometimes-rudimentary construction and controls. Today, many passenger jets are essentially flown by a computer, but that wasn’t the case in 1943.

“In those days, everything was very manual,” Bernard notes. There was a compass, for example, but no GPS to give instant positioning. In the raid, the planes skimmed the ground rather than conduct the high-altitude bombing that they were designed for. “A lot of this stuff turned out to be seat of the pants.”

The visit to the past in his fiction is definitely a change of pace for Bernard, and he has decided he might stay there for a while as a writer.

“Once I got into the history, I found it really did interest me a lot,” he says. He has already started writing another WWII novel, this one set in the Pacific.

Like many of us with relatives, friends, or neighbors who lived through WWII, Bernard allows that he sometimes regrets the lost opportunity that their stories could have brought to our writing—if only he had taken the time to hear them. Like hundreds of thousands of young men and women of the Greatest Generation who were in uniform, his own father served in the Navy during WWII.

“I wish I knew I was going to become a writer years ago,” he says. For example, a friend’s father from Germany once surprised Bernard with his flawless English… until he explained that he had been a POW in Texas. Wouldn’t that have been a great perspective to include?

After an accomplished career—actually several different careers as military officer, professional meteorologist, and author—the 79-year-old Georgia resident said he had been considering retiring from writing, but has found that the historical subject matter gives him renewed interest in telling the stories of those who have come before.

“It was something I just felt a calling to do,” he says.

Before becoming a novelist, Buzz worked at the Weather Channel as a senior meteorologist for 13 years. Prior to that, he served as a weather officer in the US Air Force for over three decades. He attained the rank of colonel and received, among other awards, the Legion of Merit.

His “airborne” experiences include a mission with the Air Force Reserve Hurricane Hunters, air drops over the Arctic Ocean and Turkey, and a stint as a weather officer aboard a Tactical Air Command airborne command post (C-135).

In the past, he’s provided field support to forest fire fighting operations in the Pacific Northwest, spent a summer working on Alaska’s arctic slope, and served two tours in Vietnam. Various other jobs, both civilian and military, have taken him to Germany, Saudi Arabia, and Panama.

He’s a native Oregonian and attended the University of Washington in Seattle, where he earned a bachelor’s degree in atmospheric science; he also studied creative writing.

Buzz is a past president of the Southeastern Writers Association as well as a member of International Thriller Writers, the Atlanta Writers Club, Military Society Writers of America, and Willamette Writers.