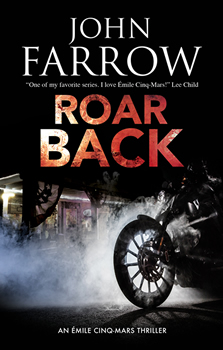 ROAR BACK begins with Sergeant-Detective Émile Cinq-Mars failing at a seemingly simple task assigned to him by his former captain: block the parole of a small-time criminal and make sure the man stays behind bars. The consequences of Cinq-Mars’s failure threaten to spark a gangland war in Montreal.

Meanwhile, when nothing more than a bunch of toasters are stolen from 28 apartment units, the case would seem to be exceptionally light—until an unidentified victim is found in a closet with a machete through his throat. Why is it critical that a minor-league car thief not be paroled? How is it that Russian crime syndicates are forming alliances with biker gangs and creating panic within the old-guard Mafia? How will Cinq-Mars find a way through the maze, survive, and protect his city from all-out war?

ROAR BACK author John Farrow (AKA Trevor Ferguson) has written seven critically acclaimed literary novels, four produced plays including an off-Broadway show, and now eight crime thrillers. One of his novels, The Timekeeper, was adapted as a feature film in 2009. Farrow’s work has been published on every continent not principally populated by penguins, in 20 countries. In this interview with The Big Thrill, he weighs in on researching crime novels, creating believable characters, and the importance of courage in today’s publishing environment.

What was your first experience with being a published writer?

The first time an editor contacted me, in the days of snail-mail, he wrote, “I won’t be publishing your book, but come down [to Toronto] and we’ll talk about it.” He was the major editor in Canada, and I was an arrogant punk, so I declined to respond. If he wasn’t going to publish me, went my attitude, I won’t talk to him. I wrote another novel instead. That editor had changed publishers when the next book was done, but the manuscript was passed on to him anyway after I sent it in. This time he phoned. “Come down to Toronto. Let’s talk about it.” A little more beaten up by then, less of a punk, I made the trip. I was emerging from many years in the bush building railway bridges and the like, and with scant formal education it was intimidating to be engaged in a literary discussion. Everything went over my head. I understood almost nothing until the editor spoke of a scene in the middle of my 350-page novel that lasted for about 15 pages. “That’s your novel,” he said. “Scrap the rest of it.” By the time I finished the rewrite under his guiding eye, even those 15 pages did not survive, but the book became my first published novel. I was a wild writer in need of direction: a godsend to receive it.

What authors or books have influenced your career as a writer? Why?

I began, of course, as a literary writer, and remained so for decades. Consequently, my early influences were in that field. I read In Dubious Battle by John Steinbeck when I was about 11. After that I devoured the major American, British, and Russian authors. Even a Canadian or two. I’m on record as saying I’ve wished William Faulkner [were] alive so that I could have the pleasure of killing him. Not that I’m a violent man, but when a writer holds a lunar sway over a fledgling author it sometimes takes everything a person has to accept the influence, then write through it to come out the other end with a voice of one’s own. I’m a better writer for it, but, man, that took years of fierce combat on the page.

In crime fiction, my preference is for the highly literate writers, notably John le Carré’s spy fiction, Martin Cruz Smith’s tales set in Russia, and James Lee Burke’s Louisiana novels. To truly enjoy the genre I need the depth of character they give us and the sense of place they so faithfully deliver while never neglecting the intricacies of the language.

What will readers take away from ROAR BACK?

First, let’s argue about what “take away” means. America, in particular, has come under the “Oprah” school of literature, which asks what a book says to you, what you learn from it, how it improves your life, why it’s good for you, like a vitamin. Sorry, but that’s a pile of hogwash. Reading is crucial to human life in our time. Even more so now than when people were reading more. But this is the key: the act of reading sensitizes and stimulates the mind and soul. It hits regions of the brain that movies are bound to miss. By requesting a partially active, rather than passive, commitment, the book draws readers into different worlds and a different mindset and keeps them there a while. The mind extends. Over time, the person extends. What’s important about books, then, is not what they teach us or hand us to take away, nor is a book automatically important if it changes a life. If a book changes your life, it’s usually because your life was amiss. Rather, the act of reading, not one book but a decade’s worth, and a lifetime’s worth, changes us and affects how we view the world and ourselves. While showing us different people in different circumstances and how they cope, or heroically succeed, or humanely fail, books gradually reshape our inner perspective. What I hope for with any book I write is that the reader takes away a feeling that this has been time well spent, a quality read, a unique narrative, something they haven’t really read before, that the characters were worth encountering and that the price of admission (even if free at a library! Go libraries!) was worth spending.

You have written eight crime thrillers. How difficult, or easy, do you find it to keep coming up with plots, characters, and endings?

Again, let’s look at the process. People—including writers—often do not understand the heart and soul of plot. Plot has nothing to do with figuring things out or designing “plot points.” I mean, it does for some writers, that’s true, but not for me. Plot, for me, only works if it’s intricately interwoven with life. People make choices: how those choices shake down is plot. The author who works out a plot [and] then sticks his or her characters into that scheme ends up wondering why the characters never come alive. Things do happen haphazardly to people, but things also happen due to how people think and act. I never work out what will happen to my characters because what living, breathing person lives their life that way? With everything worked out for them? Nobody I know. I allow my characters to show me how the book will go as they travel along in their world. I don’t manipulate them; they push me around. Allowing my characters to behave and act as people gives me my characters.

What kind of research does it require to write thrillers?

Here’s the secret to my research: (1) learn the basics of what you need to know, but don’t fanatically depend on research because you’ll be ground down by it and it’ll stifle your creativity; (2) live in a way that gives you broad experience with people from all walks of life, which requires committing the whole of your life to the process; and (3) both develop and rely upon your own intuition. Top cops, for instance, will always have an agenda, so you need to rely on your own knowledge to properly break down what they say. Criminals have a habit of deflecting their culpability and cultivating their grievances, so rely on your own experience to sort through what they offer. Everybody lies—from the everyday crook to the master criminal, from the beat cop to the top cop—they all lie, and yet they all possess truths native only to them. Learn to distinguish an elaborate lie from a gram of truth and don’t expect that to be easy. Be wary of romanticism when people tell you a story but be willing to skillfully deploy romanticism yourself when fabricating a tale.

Utterly critical. As a young sod I wrote every day no matter what. It didn’t matter if I was building bridges in the wilderness or driving a cab all night in the city, I wrote fiercely every day as though my life depended on it. And it did. No matter if I wrote badly. If making my word count took an hour, fine; if it took 14, my tough luck, but fine. You only learn on the page. You only develop when you’re at your desk. You only get it done if you’re disciplined. All of that still remains true. What was discipline in my youth—sacrifice everything, which was never easy—becomes routine as time goes by, and eventually becomes as natural as breathing. So much so that a day not writing makes me seriously grumpy. No different, really, than a farmer plowing his field or a shoemaker sewing leather: do what you do or get out of town.

What is a typical day like in the life of John Farrow? Or are there any typical days?

The odd thing about the coronavirus pandemic (take care and be well, everyone) is that for a writer the days are not much different. Get up, write, have a drink at the end of the day, a decent meal, and repeat. Social hours are different now, of course, as they don’t exist, and I miss the occasional visit to a bar or restaurant, and live music especially. I miss sitting with pals. Not sure if I’ll get out to sail or not. But I write and walk and write and that never changes.

Do you often receive questions from aspiring authors, asking how they should start their path to publishing? What advice do you give them?

I don’t sugarcoat it. It’s a tough gig that’s getting tougher. But here’s the advice I’ve always handed out when asked, even though it’s not always well received. Your job is not to worry about getting published. Your job is to write the best damn book you can possibly write. If it doesn’t get published, write another one that’s better. Then repeat.  The writer’s job is not about publishing—and there are more options now, including self-publishing; the writer’s job is to write well. Focus on that. If your focus is on publishing and, oh God, publicity, you won’t ever be as good a writer as you might have been. If you focus on what some say the market wants (the market usually wants good writers, but not always and how depressing is that?) rather than what is deep within you, itching for expression, you won’t be as good a writer as you might have been. Of course, there are exceptions! And they sometimes become hugely successful. I have worked with a writer far more successful than myself, but he has the intelligence to know that he’s not much of a writer, just a very good self-promoter, but he also has the good sense to want to improve, as ultimately that will be necessary, or he’ll lose his crowd. Most anemic writers, some successful, most not, could have been better if they’d only been a lot braver. So be brave. That’s my advice. And write a much better novel than the one you think you can write.

Also, if the aspiring writer is young, I encourage her or him to read. If you’re young and you’re not destroying forests with your reading habits, then think about a different career. I mean, seriously, what Olympic athlete doesn’t work out? For the aspiring writer, that’s called reading.