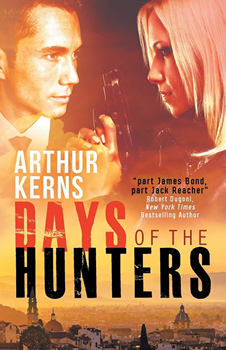 CIA officer Sandra Harrington hurries from her Paris apartment to Tuscany to assist her partner, Hayden Stone, who has survived an assassination attempt by a suicide bomber. To find and neutralize the terrorists who organized the attack, Harrington travels to Cyprus and Beirut and only escapes death by outshooting a murderous gang.

Meanwhile, Stone pursues the terrorist mastermind Abdul Wahab, who is intent on overthrowing the Saudi Arabian monarchy and blowing up the Duomo, Florence’s world-famous Renaissance cathedral. This action takes place in Italy, set against a backdrop of beautiful landscapes and exquisite food.

DAYS OF THE HUNTERS scribe Arthur Kerns served in the FBI, specializing in counterespionage and counterterrorism, before retiring from the Bureau and becoming a consultant with the Director of Central Intelligence and the Department of State—a career path that left him uniquely suited for the work of writing thrillers. To celebrate the release of his latest novel, Kerns took some time to chat with The Big Thrill about the book’s inspiration, his influences, and promoting a new release in these most unusual times.

This is entertainment with a serious edge. The story relates how US counterterrorist “boots on the ground” operate. The action takes place in Italy, Beirut, Cairo, and Cyprus and involves the CIA, Mossad [Israel’s national intelligence agency], and the Italian intelligence services and how they cooperate—and don’t. Spiced with a little romance, the protagonists combat adversaries intent on harming Western society.

What was the biggest challenge this book presented? The biggest opportunity?

Diversion Press published my prior novels on an annual schedule, but a number of mishaps, setbacks, and personal issues delayed this book for three years. I was determined to have it published one way or another and succeeded.

Alan Furst, Charles McCarry, Robert Dugoni, and Jason Matthews are authors who write about the international spy genre in their own manner. I found reading them enjoyable as well as educational from a writer’s standpoint.

DAYS OF THE HUNTERS is a spinoff of my Hayden Stone thriller trilogy, which was directly inspired by our counterterrorism reaction following the 9/11 tragedy. The CIA had already prepared itself by setting up paramilitary units, but pulled out the stops after the World Trade Center bombing. The US geared itself for a protracted conflict with hostile foreign organizations like Al Qaeda and Hezbollah. I wanted to tell the story of these CIA operatives on the ground—the people who had to deal day to day with combating the enemy in spite of the Brahmins back in Washington issuing bewildering orders.

Since my novels are thrillers, I count on the International Thriller Writers for ads and promotions. Amazon provides some avenues, like free book days. I also promote my books on Twitter and Facebook. An important marketing source is my list of readers who I contact when my book is first released. Book signings and writing conference panel appearances are important, but not now during the coronavirus epidemic.

At my age racing my Porsche is out of the question, so golf is my main sporting outlet. Travel has always been one of my pleasures. I’ve worked and lived in all the locations where my stories take place. Greece is the next venue for the sequel to DAYS OF THE HUNTERS. Although I’ve been to Greece numerous times, I had planned to travel there to see how it has changed following the financial and immigration troubles. Now with the travel bans, I’ll stay home with my wife and catch up on my reading and cooking.

“You know that with Art Kerns’ FBI/CIA background he really knows what he’s writing about.”
– M. A. Lawson, award-winning author of Rosarito Beach and Viking Bay

“Hayden Stone—part James Bond, part Jack Reacher—isn’t afraid to mix it up, but cleans up well in this action-packed, multi-layered romp through the African continent as he searches, literally, for a ticking bomb.” – Robert Dugoni, New York Times bestselling author of Murder One and In The Clearing.

“Kerns is a capable writer with a keen eye for local ambiance.” – Washington Independent Review of Books

“A modern thriller that echoes today’s headlines. Populated with fascinating characters and tightly plotted with twists and turns that will keep you guessing until the end “– D. P. Lyle, Macavity-winning and Edgar- and Agatha-nominated author of the Dub Walker Thriller Series

“Hayden Stone comfortably operates in this world where tribal leaders vie for power with the central government, al Qaeda exerts its influence through murder and mayhem, and double-dealing among Bedouin and townspeople is a national pastime.” – The Intelligencer, the journal of US intelligence studies, spring 2016 issue

Arthur Kerns joined the FBI with a career in counterespionage and counterterrorism. On retirement, he became a consultant with the Director of Central Intelligence and the Department of State. His lengthy assignments took him to over 65 countries. He earned degrees in International Relations from St. Joseph’s College in Philadelphia and an MBA from New York University. He spent a year studying Arabic at the Defense Language Institute in Monterey, California. A past president of the Arizona chapter of the Association of Former Intelligence Officers, he is married with two sons. His award-winning short stories have been published in a number of anthologies.

He is a book reviewer for the Washington Independent Review of Books. Diversion Books, Inc. NY published his espionage thrillers The Riviera Contract and The African Contract. The third in the series, The Yemen Contract, was released in June 2016. In addition to his espionage thrillers, he has completed a mystery based on the unsolved 1929 murder of an FBI agent in Phoenix.