Keeping it Real Amid
Fictional Conspiracy 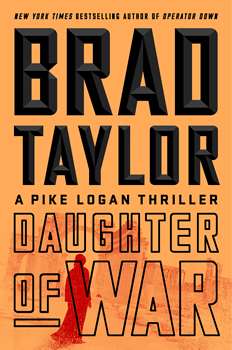 When you pick up a military thriller, you want to feel that the author not only has the expertise to keep it real, but also understands the people who do this dangerous work. Brad Taylor has the goods—which is evident when you read his latest thriller, DAUGHTER OF WAR.

The novel follows Taskforce operators Pike Logan and Jennifer Cahill as they deal with a huge and confusing international conspiracy. It begins with the team on the trail of a North Korean who is trying to sell American intelligence to Syria. Already not good. But Logan and the Taskforce stumble upon something much graver—the sale of a lethal substance called Red Mercury.

As the book progresses, it’s clear that Logan and Cahill are real heroes, although they wouldn’t say so.

“I suppose a true hero would execute Taskforce missions even if he or she hated it solely out of duty to a greater good, but that’s not Pike or Jennifer,” Taylor says. “Like real life, there are many conflicting and complementary aspects that drive them to continue working for the Taskforce, but the idea of being a hero isn’t one of them.”

That said, it takes great heroes to deal with great villains. And this novel is such a fascinating cross-hatch of conspiracies, it’s hard to decide which of the bad guys is the main threat.

According to Taylor, “The deadliest antagonist is Tagir, a mixed martial artist from Dagestan working for a Russian private military company. But the character pulling the strings on the entire plot—and the one who sets Tagir into motion—is a Syrian Air Force Intelligence officer. He doesn’t do a lot of killing or pose a direct threat to the members of the Taskforce, but he’s directing the others and is the architect of the terrorist plot.” 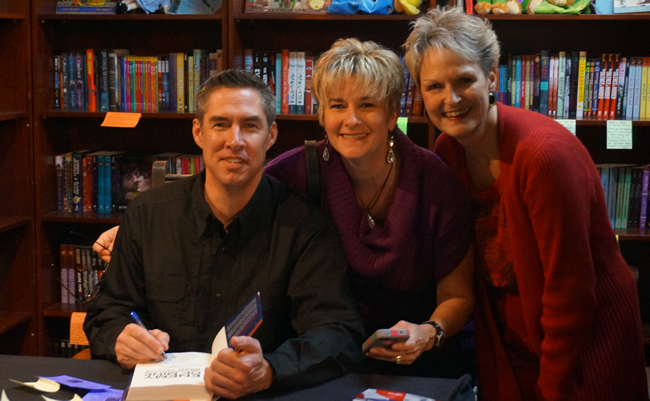 Brad Taylor poses with fans during a signing event

While the characters carry the novel effectively, the plot is also well designed, thanks to Taylor’s wealth of military experience. Taylor served more than 20 years in the army, nearly half that time in Delta Force. So when he says that tactically everything is very realistic, and could happen just as described, there’s good reason to believe him.

“I did a healthy amount of on-the-ground research in Monaco, France, and Switzerland to ensure the settings and activities were correct, and the story itself sprang from our ongoing dilemma with North Korea’s nuclear weapons program,” he says. “I always wondered why we care so much about the nuclear program, but not a whit about the five-ton stockpile of chemical and biological weapons North Korea has developed. I decided to explore that.”

Taylor admits that strategically, the least realistic thing in the novel is the timing—everything happens in a week and a half. 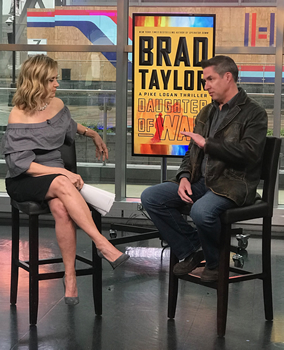 “In truth, real-world attacks like I describe in DAUGHTER OF WAR take a year or more to plan,” he says. “And the same amount of patient work to unravel. Rarely is there a ‘ticking time-bomb’ scenario in real life. Terrorists either get stopped midway through the planning cycle, or they succeed with us completely unaware of the impending attack.”

Readers will appreciate Taylor veering away from too much reality in this case, since both the real-life options he mentions would make for pretty dull reading. Luckily, Taylor’s imagination fills in the blanks to create a true page-turning experience for even the most discerning reader.

When asked what has changed since Taylor left the military, he says it’s primarily the technology.

“Counter-terrorism is a constant cat-and-mouse of move and counter-move,” he says. “They figure out a way to attack us through some exploit, or a new way to privately communicate their plans, and we figure out a way to counteract that, so they begin anew on a different thread to exploit.”

With the constant upgrades, how does Taylor keep up with it all now that he’s retired?

“Just like I did on active duty,” he says. “Research, research, research. I don’t have access to the latest classified reports now, but I do have a healthy pool of friends still in the business that I can question up to the limits of classified.”

Despite the constant march of technological advancement, Taylor says terrorism and counterterrorism is really about the human domain. So, even though his plots cover broad international events, characters are the heart of any story—period. 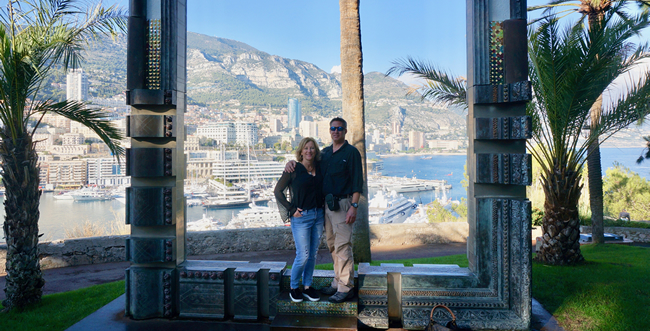 “I start out with the characters in mind from the beginning—both the good guys and the bad guys—because the reader needs to identify with them for the story to succeed,” he says. “In fact, while I suppose my books are ‘plot driven,’ my writing career started out on character. When I wrote One Rough Man, my first novel, I wanted to create a story of redemption, which would have been the theme regardless of the plot. Since I was a Special Forces soldier, the plot became terrorism.”

As it turns out, DAUGHTER OF WAR became much more character driven than even Taylor originally intended thanks to Amena, a refugee in the novel, who was just supposed to be a link in the chain for Pike and crew to resolve the plot.

“As I wrote her, I became more and more engrossed, until she took over the book,” Taylor says. “So much so that the title was changed midway through the writing process. While the terrorists and evildoers hold sway throughout, I think it’s her story arc with which the readers will ultimately identify.”

Like the previous dozen novels in this exciting series, DAUGHTER OF WAR maintains a strong pace, while still paying attention to high-tech details. Taylor says the key to this momentum is balance. 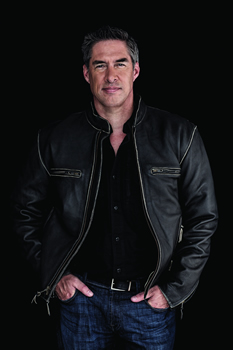 “I only use enough detail to move the plot forward, and help maintain a pace that keeps the reader turning the page,” Taylor says. “Sometimes that requires explaining a weapon in depth, because it’s necessary for the resolution of the plot. Other times simply writing, ‘He drew a pistol’ is enough, without going into the make, model, and caliber.”

The terrorist threat shows no sign of slowing down, and neither does the Taskforce.

Taylor has just returned from a research trip to Brazil and is banging away on the next episode, which closely follows this one.

“The events in DAUGHTER OF WAR have significant repercussions in the current manuscript, where the Russian group Pike thwarted in DOW come back with a vengeance, quite possibly causing the demise of the Taskforce.”

For the sake of his readers, we certainly hope that isn’t the case.