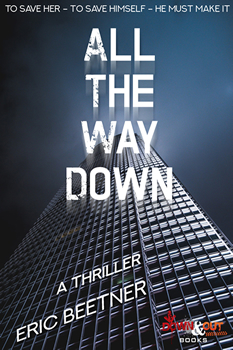 In a city where corruption is the norm and the drug kingpin is untouchable, the pull can sometimes be easy for hardworking street cops. In Eric Beetner’s ALL THE WAY DOWN, small mistakes quickly turn into real crimes for Detective Dale Burnett—until he gets in too deep to walk away.

Now, when the mayor’s daughter is kidnapped, Burnett is faced with a life-altering decision…suicide mission to save the girl, or life in prison as a crooked cop? Burnett chooses to risk everything for a chance at redemption—or at least death on his own terms.

With a career that includes more than 20 novels, Crime Fiction Lover calls Beetner the “hardest working man in noir.” Here, he takes time out of his busy schedule to chat with The Big Thrill about his latest release, ALL THE WAY DOWN.

ALL THE WAY DOWN is a story of redemption. In your opinion, is redemption only possible if you have to give up everything to get it?

I think we all seek redemption in small ways, quite often in one-on-one relationships. In those cases, I don’t think you need to give up anything, maybe a little ground in your argument or a little of your pride. But if you’re talking fiction, especially thriller fiction, I know I want to see characters who have to lose it all, or nearly so. And sometimes it’s an inverse equation: the amount you need to give up is directly related to how badly you screwed up and how far back your road to redemption runs.

In the book, Dale’s father gave him some good advice, although Dale may learn the lesson a little late. Is there any advice you would or have given to your kids?

I give my kids advice all the time. They’re 12 and 10 right now so whether any of it sinks in is debatable. More important than any deep sit-down conversation is that my wife and I try to model good behavior and show them by our actions what it means to be a good person. I think we’ve left an open door for them so that when they need real-world advice they’ll feel comfortable coming to us. We shall see.

Tat’s Tower labyrinth is like the nine rings of hell in Dante’s The Divine Comedy—each floor brings a new obstacle to Dale’s redemption. Where did the idea for the tower fortress come from?

I definitely had an Indonesian movie called The Raid: Redemption in the back of my head, but your idea makes me sound much smarter so I’m going to use that from now on.

In the film the action takes place in a contained environment that is a single building and I like the idea of those limitations on action. It forces you to get creative. A lot of stuff happens outside the building in the book, but I was able to go farthest with wild ideas when inside the tower. I had to stop at 15 stories tall, because if I had to keep making up new things for more floors I might have gone even crazier. But the goal was to keep readers from being able to guess what was behind the next door.

The city the story takes place in has seen better days with all the crooked cops and politicians working together with the crime boss.  What do you think it would take for a city like this to be redeemed?

With most corruption like that, the best solution is usually to clean house and start over. Whether you can get new people who won’t fall into the same habits is debatable. It happens too often in other countries, but for a small city like this, a new administration and new top cop could probably start things on the right track. But corruption and graft is a cancer that must be cut out.

You have been a painter, musician, actor, director, podcast host, and TV editor, in addition to writer. Which is your first love and why?

I’ll probably always love movies since they were first for me. The first job I ever wanted was to be a stuntman. I never went through a fireman or astronaut phase. I wanted to do high falls and jump cars over rivers and learn how to take a punch. I love the idea that filmmaking involves almost every discipline—writing, music and sound, visual arts in the cinematography, art and architecture in the design. If only the business weren’t so soul-crushing.

You did the cover work for ALL THE WAY DOWN. What do you find challenging about creating covers? How do you feel this one stacks up against others you have done?

I quite like how the cover came out. I oftentimes try to be too literal, I think, in my design. The best book covers are evocative without being on the nose. I find the whole process challenging because I’m completely untrained and I don’t even use the full version of Photoshop. I have some janky dumbed-down version that I somehow make work. When I get a cover design to come off well—and I am proud of most of my covers—I feel pretty good about myself…until I see a great cover by a real artist like Dyer Wilk, Matthew Revert, or J. T. Lindroos. Then I realize I’m carving in stone while they’re creating works for a museum.

Who has been your favorite interview on your podcast, Writer Types, and why?

Oh, man, that’s hard. It’s easy to say some of my heroes like getting to talk to Joe R. Lansdale or Lawrence Block. Many of my favorites have been the unexpected ones with people I didn’t know before or don’t know well, like our interview with Sheena Kamal. She turned out to be so charming and funny, and she immediately got our style, so it turned into a really fun chat. Or Gillian Flynn, who I’m sure has been asked every question under the sun a thousand times. I went straight in with the sillier questions and I could tell she was grateful to have some fun with the interview and not have to be so self-serious.

Is there one bit of guidance that you have learned from these writers that you could share, and does that advice inform your own writing?

There seems to be a common thread in writers who are the most accomplished and prolific in that they don’t over-analyze it. Get your butt in the seat and do the work. Treat it like a job. Don’t be precious about it and don’t think you’re any great shakes because you finished a novel. I feel the same way and it’s been quite gratifying to hear so many writers with decades-long careers feel the same way.

The book seems like a natural fit for a motion picture. With your history as a director and TV editor, do you write looking through one of those lenses, or does your experience in the visual arts come through your writing organically?

I started in screenwriting and yes, I see everything as a movie in my head. I can’t help it. I think it comes instinctually at this point. But some of the lessons I learned writing scripts stick with me in novels and it all translates very well, primarily that character is action, meaning that people are defined much more by what they do than by what they say.

You’re currently working on a new project that you’re excited about. What is it and when can we look forward to seeing it?

Remember I said I wanted to be a stuntman? I’m finally writing my stuntman novel. I started it in 2013, but set it aside for a number of reasons. When I opened it back up I couldn’t believe it had been so long. But in that time I cracked the part of the story that wasn’t working for me. I tossed out the 20k or so words I had written back then and started over. Now it’s flowing and I’ll be done by the end of the year.

As for when anyone will see it? Who knows? I have four other finished manuscripts ahead of this one in line. I’m currently seeking a new agent and weighing my options after a fairly tumultuous year, writing-wise. All I can do is keep my head down and keep writing and know that somehow it will work out, but if there’s no book in my hand, then there will never be a book deal. And there are more stories to write. My notebook of next ideas is always overflowing. 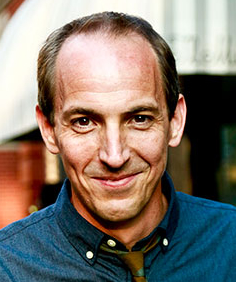 He has written more than 20 novels including Rumrunners, Leadfoot, The Devil Doesn’t Want Me, The Year I Died 7 Times and Criminal Economics.

To learn more about Eric and his work, please visit his website.