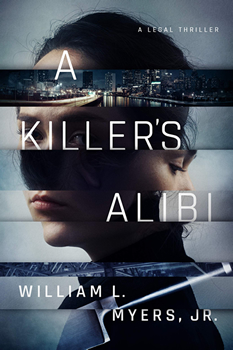 Legal thrillers seem to be making a comeback—and if you’re looking for a twisty one with heart, check out the latest by William L. Myers, Jr., A KILLER’S ALIBI.

In this third novel in Myers’ Philadelphia Legal series, attorney Mick McFarland’s client faces some pretty damning evidence along with family secrets that make him look even more guilty. Crime lord Jimmy Nunzio is caught, knife in hand, over the body of his daughter’s lover and a sworn enemy.

At the same time, Mick’s wife, Piper, is working to free a woman sentenced to life in prison for her abusive father’s death. Piper knows that the whole truth was not revealed at the woman’s trial, but Piper is determined to get the truth out there and prove the woman innocent.

Mick and Piper are both likeable protagonists. They would deny being heroes, but as the author points out, they are believers.

“Not believers in the system as it is,” Myers says, “but as it should be. Mick and Piper both believe that the legal system should function to win justice. They both know, however, that the system is imperfect, and that, to make it work to effectuate justice, sometimes it’s necessary to work the system, to play outside the rules.”

This novel follows Mick and Piper as they work very different cases. Nonetheless they are a team in the best way. When they first married, they worked together closely. Working as an assistant district attorney, Mick would run his ideas and strategies by Piper. But as the first book in the series—A Criminal Defense—makes clear, he became too busy and self-involved after he became a defense attorney. It almost cost him his marriage.

“In A KILLER’S ALIBI Mick and Piper are close again,” Myers says. “He encouraged her to build an innocence project practice inside the firm, and they both share case strategies, as well as the angst they may feel when things aren’t going well. They are, more than ever before, legal partners in the truest sense.”

These characters ring true to life, and their cases feel authentic, thanks to William L. Myers’ 35-year career as an attorney, the last 25 of which he spent running his own firm. He came to appreciate the drama of the courtroom and decided he wanted to portray it in literature.

“Because of the high stakes involved in the criminal context, their life and liberty, I felt that criminal law would present a good venue through which to develop intense interpersonal drama as well,” Myers says. “I do my best to convey the stress and emotional turmoil the characters are going through as they muddle their way through the legal challenges they confront.”

That means that the courtroom scenes—the openings, closings, direct and cross-examinations—directly reflect his real-life experience before the bench, both in terms of the attorneys’ behavior, and what they are thinking and feeling inside.

According to Myers, “Trying a case feels like juggling on a roller-coaster. There are dramatic ups and downs during which the attorney must keep his eyes on and balance many moving parts. I try to convey that in my courtroom scenes.”

The fact that Myers is a trial attorney and therefore can convey what attorneys actually think and feel when they’re in the courtroom is one thing that separates his legal thrillers from others. Also, he works hard to ensure that his books are far more than simply legal procedurals.

“As a society, we are only recently coming to grips with the ordeals that are unique to women…” Myers says. “…the ways that women are so tragically abused, and discounted, much more so than men. So, one of the story lines involves a girl sexually abused by her father while the other involves a daughter whose father refuses to see her for who she really is. Both pay a high price for the failings of their fathers, as, in the end, do the fathers themselves.”

As such, this novel is a lot more than predictable courtroom action. A KILLER’S ALIBI is a character driven thriller that will make you think and will keep you guessing to the end. 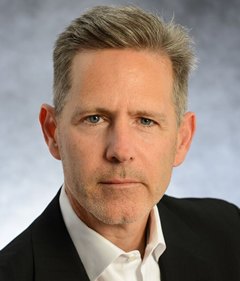 William L. Myers, Jr. is the No. 6 bestselling author for Amazon Kindle in 2017 for his debut. Once you pick up his legal thriller and bestselling novel, A Criminal Defense, it becomes obvious he is not new to the intricacies of the legal profession. Open A Criminal Defense and you’ll find yourself lost in a labyrinth of deceits and hidden agendas, a world where everyone has a secret. You never know what is going to happen next or when the plot is going to take another unexpected turn.

Don’t miss his second book, An Engineered Injustice, which debuted in January 2018. You’ll really feel what it’s like to be a young attorney in the trenches, beating the streets, against all odds. His third novel, A KILLER’S ALIBI, debuts in January 2019.

Born in 1958 into a blue-collar family, Mr. Myers inherited a work-ethic that propelled him through college and into the Ivy League at the University of Pennsylvania School of Law. From there, Mr. Myers started his legal career in a Philadelphia-based mega defense firm. After ten years defending corporate America, he realized his heart wasn’t in it. So, with his career on the fast track to success–he gave it all up and started his own firm. It was time to start fighting for the common guy.