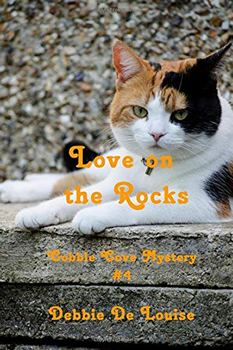 It’s February in the small town of Cobble Cove. Love is in the air . . . but so is murder!

When Alicia helps plan a Valentine’s Day party at the Cobble Cove library that also includes a surprise for her newlywed friend, Gilly, things go wrong when a mysterious box of chocolates addressed to the director turns out laced with poison.

Clues Lead to A Dead Suspect

Although Alicia promised John she’ll no longer meddle in crime investigations, she and Gilly set out to find the person threatening Sheila who murdered the courier of the deadly candy. The three people they suspect include the professor from California who’s been romancing Sheila while she assists him with research for his book; the obnoxious patron Rhonda Kleisman who threw coffee at the director after refusing to pay for a damaged book; and a visiting widow staying at Gilly’s inn who’s unnaturally curious about Sheila and earns the nickname of Madame Defarge for her interest in knitting.

While Alicia and Gilly are trying to solve this new Cobble Cove mystery, Sneaky is introduced to Gilly’s new kitten, Kittykai, a calico she brought home from her honeymoon in Hawaii. It’s not like at first sight, but the two cats eventually become friends. They also both play a part in foiling the killer’s murder attempts, but will Alicia and Sheila survive unscathed?

Award-winning author Debbie De Louise spent some time with The Big Thrill discussing the fourth installment of her Cobble Cove mystery series, LOVE ON THE ROCKS:

It took a while to complete this fourth of the series because I was working on other projects. I like to alternate my series with standalone titles. My biggest opportunity was that, as I created the story, I added some subplots that will open up a new thread in the forthcoming books of the series.

Cozy mysteries are fun to write, and people enjoy reading about quirky characters in small towns. Although there’s usually a murder involved in cozies, they aren’t graphic or violent. Also, there’s no explicit language or sex in these books. I include romance in my cozies, but it’s more of a sweet variety. I also try to add some humor to my series and always feature pets, especially cats, of which I’m very fond. These are all elements in most cozy mysteries and make them enjoyable to write.

For the first book of this series, the characters came first, and they continue to play a big part in all the books, including my new release. Characters are essential to cozy mysteries. They are what draws people in because readers can identify with them and the lives they lead in the stories. 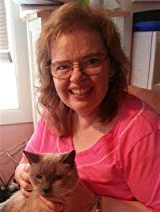 Debbie De Louise is an award-winning author and a reference librarian at a public library on Long Island. She is a member of Sisters-in-Crime, International Thriller Writers, Long Island Authors Group, and the Cat Writer’s Association. She has a BA in English and an MLS in Library Science from Long Island University. Her novels include the four books of the Cobble Cove mystery series: A Stone’s Throw, Between a Rock and a Hard Place, Written in Stone, and her new release, LOVE ON THE ROCKS. Debbie has also written a standalone mystery, Reason to Die, a romantic comedy novella, When Jack Trumps Ace, and a paranormal romance, Cloudy Rainbow. She lives on Long Island with her husband, Anthony; daughter, Holly; and cat Stripey.

To learn more about Debbie and her work, please visit her website.