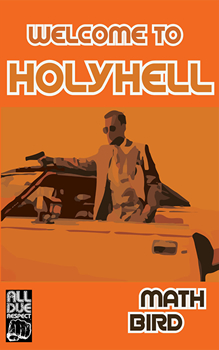 Welsh writer Math Bird works in a studio overlooking the Dee Estuary in the town of Holywell. The waterway serves as a boundary between Wales and England. Across the water, to the north, are Liverpool and Manchester, where local residents often commute for work.

These are the borderlands of Wales, and the writing that Bird does reflects this crossroads region with all of its history and angst.

Recently, Bird agreed to answer a few questions for The Big Thrill about his writing. (During the Skype session, he kindly explained that the name Math isn’t a shortened version of some exotic Welsh warrior’s name like Llywelyn or Cadwgan, but just the Welsh version of Matt.)

“It’s kind of seen its heyday,” Bird said of Holywell, an ancient and scenic place by the coast. In his writing, Bird adds elements to create his own brand of Welsh noir. The landscape and the Dee tend to run through all his writing.

“The estuary is in most of my stories,” he says. “There’s very few crime novels set in northeastern Wales. I wanted to make the region more accessible.”

To some extent, he’d already been doing that in his fiction. He has had some of his writing produced by the BBC, which he calls an interesting process in hearing someone else read what he’s written.

“I sometimes think that I would not have read it that way. It’s interesting how someone else puts emphasis on certain words, for example,” he says.

In an essay entitled “The Genre of Frontiers” at the website of his publisher, Down & Out Books, Bird writes, “Growing up in the northeast corner of Wales, borders have played a significant part in my understanding of place. Most of northeast Wales lies on the border between England and Wales. Neither fish nor fowl, it’s an in-between place. Arguably, this could apply to most borderlands and cross-border territories—each a curious amalgam of social and cultural landscapes. Place plays a significant role in our lives. Our sense of it, and whether we feel ‘in’ or ‘out’ of place affects who we are, what we were, whom we might become.”

His new novel revolves around a young character named Jay, who finds a briefcase filled with cash (enter the crime element).

The publisher’s description of the novel aptly puts it, “Set in the borderlands of northeast Wales, WELCOME TO HOLYHELL is a coming-of-age story about loneliness, hope, the past that haunts us, and the fear of growing older.”

The title was inspired by graffiti, from when the local “Welcome to Holywell” sign was edited with a can of spray paint.

Bird’s new novel is historical in a sense, set in the summer of 1976.

There’s a lot going on that summer 42 years ago. First of all, there’s a brutal heat wave—the summer of ’76 still holds the record as the hottest in Wales. It’s also the eve of the Winter of Discontent, when strikes and protests heralded political change in the U.K. and the arrival of Margaret Thatcher.

“I remember it quite vividly,” says Bird, who was eight years old that summer. He emphasizes that the novel isn’t really about historical events, but that long-ago summer creates a backdrop as well as provides the humid, unsettled tone of the novel.

In his writing, Bird says that he very much tries to weave in the culture and capture what it means to be Welsh, and in particular, what makes this borderlands region so unique. “It’s more an exploration of the region’s history,” he says.

“Wales struggles as a region. A small region within Wales struggles even more,” he adds. “Northeastern Wales is very much a neglected region in the public imagination.”

He comes to the topic with more than a little expertise because he actually holds a Ph.D. and has studied the history and culture of the region at an academic level.

He’s a technical writer by day—working from his home office—and devotes most of his weekends to writing fiction. During the week, Bird is a prodigious reader, spending as much as three or fours hours each night with his nose in a book.

“I love reading other writers,” he says. “I read lots of novels and crime stuff—whatever catches my eye. Good stuff is good stuff.”

For him, reading also helps to prime the pump of his own writing.

“One sentence in that novel will trigger lots of other ideas,” he says. And with reading as a spark, writer’s block is never an issue.

Bird’s process in writing involves a lot of thinking things through. “I form the story in my head and decide where I want it to go,” he says, adding that he prefers an organic approach.

“Sometimes the writing itself will dictate where it will go,” he says. “Enjoying the good sentences and cringing at the bad.”

Welsh writer Math Bird has had stories broadcast on BBC Radio 4, Radio Wales, and Radio 4 Extra. His work has also appeared in various magazines and anthologies.

His recent crime and noir short stories, including the Pushcart Prize-nominated “The Devilfish,” may be found in his short story collection Histories of the Dead and Other Stories published by All Due Respect Books.