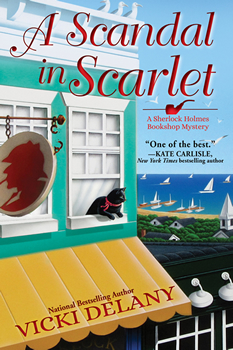 With A SCANDAL IN SCARLET, author Vicki Delany delivers the fourth instalment of her Sherlock Holmes Bookshop mystery series. In this shrewdly plotted tale, Gemma and Jayne donate time to raise money for the rebuilding of a burned-out museum—but a killer wants a piece of the auction.

Delany is no stranger to crafting riveting plots and memorable characters. The multi-published author has three—count them!—cozy mystery series on the go, and so the first question any fellow writer has to ask is, which is her favorite of those series and why?

“That’s like asking me which is my favorite child. Difficult to answer, but in this case not impossible,” she says.

“I’m particularly fond of the Sherlock Holmes Bookshop series.  I love attempting to create the mind of The Great Detective in a modern young woman. It has its challenges: if Gemma Doyle, my fictional bookshop owner, is to be like Sherlock, she sometimes has to be a bit clueless about people’s reactions to her deductions, not understanding that they might not want her to know things about them they’d rather keep hidden. So it’s a balancing act, making her super smart but sometimes unaware of people’s feelings; making her kind and well-intentioned, but not able to understand why people don’t always keep up with her. All of that that makes her an interesting character to write. And I love my fictional bookshop. Everything sold in it, books and merchandise, exists in the real world.”

Below, Delany takes some time to indulge The Big Thrill with more insight into A SCANDAL IN SCARLET, the trajectory of her writing career, and her love for the famous detective, Sherlock Holmes.

Many of us would love the chance to go back and re-write some of our early works. Is there anything from your early catalogue you’d like to have a second go at? Do you think your writing has changed over the years?

My writing style hasn’t so much changed as the style of book. My first novels were standalone psychological suspense, followed by a traditional police procedural series, and now I’m writing cozies, which I love doing. As well as the Sherlock Holmes Bookshop novels, there’s the Year-Round Christmas series, and the Lighthouse Library series, which is written under the pen name of Eva Gates. When I look back at my first books, I’d definitely tighten them up if I could. A lot of long descriptions of walks in the woods need to go! I’ve been lucky to have had the opportunity to write and have published so many different styles of mystery novel, and I do think that’s made me a better and more well-rounded writer.

Tell us more about the Sherlock Holmes Bookshop and its owners.

Gemma Doyle owns the bookshop, located at 222 Baker Street in West London, Massachusetts (a fictional town on Cape Cod), along with her Great Uncle Arthur. Gemma is the “Sherlock” character, the one with the incredible eye for detail, a great memory, a lightning fast mind, and somewhat clueless social skills. But she’s a thoroughly modern young woman, concerned with running a successful business, walking her dog at the end of a long day, maintaining her friendship with Jayne Wilson, and trying to have a love life.

The shop next door is Mrs. Hudson’s Tea Room, also owned by Gemma and Uncle Arthur, along with the head baker, Jayne Wilson.  I loved creating my fictional store and I take great care in stocking it. Everything they sell exists in the real world.

Many of the authors I have the pleasure of interviewing are Conan Doyle fans. Which of his stories do you like least and most?

I am definitely a fan of the original Sherlock Holmes series, as well as some (not all) of the modern offshoots. Admittedly, some of the books and stories are better than others. My favorites are “The Adventure of the Speckled Band” and The Hound of the Baskervilles, although I’m not so fond of the “The Adventure of the Sussex Vampire” or The Valley of Fear. As for TV and movie adaptions, my favorite by far is Jeremy Brett, and the Benedict Cumberbatch interpretation second.

You have three daughters—like me! We definitely deserve a medal. How did you survive in one piece and still manage to write?

It took me four years to write my first book. I had the three kids at home and was working a full-time job, so the writing happened whenever I could fit in the time. It’s only now, that the daughters are all grown up and out in the world, that I have all the time I need to write.

A number of crime writers have dabbled in writing romances, or had a romantic thread running through their mysteries. I suppose that’s only natural if fiction is going to resemble reality. Does that complicate matters for an author or make it easier?

Both. It’s another ball to juggle in the midst of creating a complex plot, but it’s also a great way to reveal the protagonist’s character. Gemma Doyle is unsure about her romantic relationships because she’s made a mess of things before with her astute observations and her blunt stating of the facts. I hope we can see something of Gemma and her complexity through the eyes of the people around her, and that includes her love interests. But, as she says, Sherlock Holmes wasn’t trying to have a love life at the same time he was pursuing his cases.

Is the fictional town of West London based on a real part of Cape Cod? Bits of the description reminded me of Provincetown.

West London is roughly Chatham. More in terms of location—between the ocean and Nantucket Sound—than any vibe. I didn’t use a real town as I needed the main street to be Baker Street, and I also wanted the town’s name itself to have a resonance of London about it.

One of the pleasures I get from reading cozy mysteries is encountering the great cast of well-drawn secondary characters. I loved the ghastly Maureen in A SCANDAL IN SCARLET. Strictly between you, me, and the readers, how much do you draw on people you’ve come across?

Very, very rarely I might take an observation I’ve made of someone in my life and use it, but not often.  Maybe I’ve been lucky but I don’t meet many difficult people in my life. Cozies, I think, are real life writ large. The ditzy friend is ditzier, the nasty neighbor is nastier, the local police are handsomer!

I’ve often said that crime books seem to take place in a parallel universe, one that resembles ours in part but not entirely, and now I can add the theory of exaggerated character traits to the mix. Thanks, Vicki, for sharing that enlightening thought. 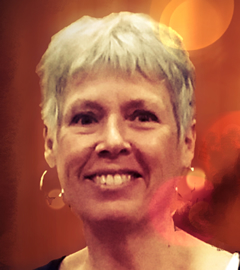 Vicki Delany is one of Canada’s most prolific and varied crime writers and a national bestseller in the U.S. She has written more than twenty-five books: clever cozies to Gothic thrillers to gritty police procedurals, to historical fiction and novellas for adult literacy. She is the author of the Sherlock Holmes Bookshop cozy mystery series, from Crooked Lane books, featuring Gemma Doyle, an Englishwoman with a mind much like that of the Great Detective, who owns a Holmes-themed bookshop on Cape Cod. She also writes the Year Round Christmas series for Penguin Random House and, under the pen name of Eva Gates, the Lighthouse Library series for Crooked Lane Books.

Vicki lives and writes in bucolic Prince Edward County, Ontario. She is the past president of the Crime Writers of Canada. Her work has been nominated for the Derringer, the Bony Blithe, the Ontario Library Association Golden Oak, and the Arthur Ellis Awards.