Closing The Book On A Powerful Series 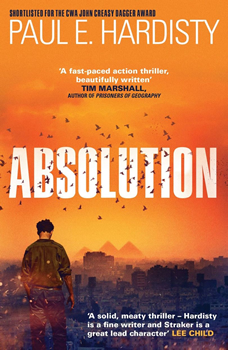 Paul Hardisty has made a name for himself with his powerful issue-driven thrillers featuring Claymore Straker, a South African who discovered the horrible truth behind South Africa’s war in Angola.

In the first two novels The Abrupt Physics of Dying and The Evolution of Fear, we follow Straker as he tries to find his way after those traumatic events. In Reconciliation for the Dead, he attempts to resolve—unsuccessfully—his issues by relating his story to South Africa’s Truth and Reconciliation Commission. ABSOLUTION is the final book in the set, and Claymore has to find a purpose to carry on.

Hardisty has worked in environmental engineering for more than 25 years, so he knows and understands the issues that he cares about so deeply. He is currently the chief executive officer of the Australian Institute of Marine Science.

Here, Hardisty talks to The Big Thrill about the final chapter of this powerful series and what readers can expect from him next:

ABSOLUTION has two protagonists—Rania, who details in her diary the horror of the kidnapping of her husband and child and calls Clay for help, and Clay himself, who makes his way up the east coast of Africa to answer that call. Why did you choose that particular style to tell the story?

In the first three installments of the series, the story is essentially Claymore’s, told through his eyes. Rania becomes an increasingly important part of the story, and of his life. For the fourth in the series, I felt that Rania’s own story deserved to be told through her own voice. She keeps a diary, in which she is trying to communicate with Clay in a way she can never, and will never, do in real life. It becomes a window into her own inner conflicts, which are just as dark and complex as Clay’s.

Clay and Rania have a complex relationship. She is married and has a child; Clay is so severely damaged by his time in the South African army during the Apartheid era that he doubts he is even capable of deep emotional love. Yet, they have a deep bond. Is the resolution of this tension an essential part of Clay’s absolution?

The resolution, or partial resolution, of the relationship between Clay and Rania is central to ABSOLUTION. But it is also a partial resolution of Clay’s inner conflicts, and demons that go all the way back to when he was a young paratrooper on the front lines of South Africa’s border war in Angola against the communists. The events of those years still echo strongly within him. The absolution he seeks is as much with the things he did and saw then, as it is with Rania.

Clay really has only one friend—Crowbar, who was his superior in his army days and has been Clay’s enemy in the past. Clay relates that he’s been told by an old healer that he has an evil spirit inside him. After a few beers he decides that Crowbar himself is the spirit. But in reality the spirit is in Clay’s mind. Is even his quest able to exorcise it?

If Clay will ever be able to exorcise the evil spirit that the old shaman saw in him in Mozambique when he was 21, on the run, fleeing the war and Apartheid, is something that only the reader can determine. Life is never binary. There are never any definitive answers. All you can do is your best, and keep going. Events that unfold in ABSOLUTION certainly go some way to putting a few of the ghosts to rest, but I don’t think anyone ever really gets over trauma. We just learn how to live with it, seal it over, and get on with life as best we can.

Much of the book focuses on the modern culture of Egypt and its stresses. You show us the deep meaning of Islam in everyday life, as well as its extremes. Was this a central motivation for the novel?

Islam is one of the central themes of the novel. Rania is a Muslim woman who grew up in a modern family. Confronting the traditional Islam she finds on the back streets of Cairo is part of the tension in the novel. There is good and bad in everyone, and in every human expression, including our religions. Islam is no different. She and Clay come face to face with both extremes in Egypt, good and very bad, as they race against time to discover who murdered her husband and son.

Clay travels up the east coast of Africa from Mozambique to Egypt and the book has a powerful sense of place. How did you go about researching his trip?

Building a strong sense of place is something I work hard to do in my writing. My goal is always to create immediacy, to put the reader right there, in the middle of the action, feeling the wind, smelling the blood, the sand between their teeth, seeing that river threading its way along the valley below, all of it. Once the reader is there, you can wrench them through the twists and switchbacks, faster and faster, through each surprise until they reach the end feeling like they’ve gone ten rounds with a professional MMA fighter but lived to look back on it. ABSOLUTION is set in one of my favourite parts of the world—East Africa and Egypt, places I have spent a lot of time in over the years, working and travelling. Most of it is first-hand experience of those places over the years, rather than specific research done for the book.

In ABSOLUTION you draw a link between terrorism and corrupt and oppressive governments, and their neglect of the well-being of their citizens. You make this explicit in the author’s note at the end. This issue comes up in all your books in one way or another. Is this the result of your own experiences in the Middle East and North Africa?

Over the years I have lived and worked throughout the Middle East and Africa. The core issue described in ABSOLUTION, one of chronic air pollution causing significant damage, especially to children, and the corruption that perpetuates this and similar situations all over the region, and indeed other parts of the world, is something I have experienced first-hand through my work, travel, and friendships. In my first novel, The Abrupt Physics of Dying, the issue is pollution of fresh water supplies by oil industry waste. In The Evolution of Fear, corrupt individuals threaten turtle nesting sites in the Mediterranean. In Reconciliation for the Dead, it’s the exploitation of natural resources of all kinds to fund wars. In a thriller or crime novel, there has to be a bad guy. My bad guys are real, based on my own experiences, and they are extra bad because they aren’t just one guy—it’s everything that comes together to create those situations—people of all kinds, systems, companies, governments. That’s a lot harder to fight. And a lot more dangerous.

This is the last of the Claymore Straker quartet. Are you working on a new series character, or a standalone, or…?

ABSOLUTION is the last of the Claymore Straker series, for now. I am working on something very different, more of a psychological thriller, more literary, exploring regret, what makes a life worthwhile, and what it takes to overcome the pain that life throws at us all. It’s called Turbulent Wake and will be published by Orenda Books next year.

The seeds of that seem to be embedded in the Straker books… I look forward to it!

Beyond the Truth by Bruce Robert Coffin