The Idyllic Start of a New Mini-Series 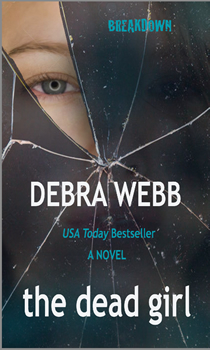 Debra Webb’s latest, THE DEAD GIRL, is the first book in the Breakdown series, a suspense mini-series that revolves around the seemingly perfect small town of Shutter Lake.

Nestled in a peaceful valley surrounded by the Sierra Nevada Mountains, the picturesque Shutter Lake is filled with pleasant, charming people. The crime rate there is zero—until a dead girl is found. Deputy Chief of Police Laney Holt is called to investigate, something she never thought she’d have to do in this quiet idyll. She’s a former L.A. homicide detective who walked away from big city crime after a shooting she couldn’t put behind her.

It turns out that the perfection of the town is just a façade, one that’s crumbling piece by piece. And thanks to Webb’s fast paced, gripping writing, the reader can’t look away from the unfolding disaster. One is left waiting for the next installment.

Yet, it won’t be from Webb.

In a less than usual format, Webb has written the Breakdown series with three other writers, with the possibility of more later. First came a meeting of two minds.

“Vicki Hinze and I had been discussing it for a while,” Webb says. “Soon we had the storyline laid out. We developed the primary plots and outlined the main characters.”

Next, Regan Black and Peggy Webb came on board.

“Each author created her own subplots, secondary characters and fleshed out and developed her main character,” Webb says, noting that there was one aspect they all agreed upon. “We wanted the women in our stories to be strong, determined and capable—we wanted the women to be the heroes. What we came up with are four amazing females who—no matter the wounds of their pasts—will stop at nothing to find the truth.”

While writing a novel is a challenge for any author, sharing that challenge with other authors brings an extra layer of complexity.

“The challenges came in the early stages when developing the overall storyline,” says Webb, adding that the solution was in the planning. “The plot lines were carefully planned out so there were no surprises. As each of us wrote our book, we let the writer of the next book know if there were any changes to our character or to the overall storyline. We kept each other informed of new secondary characters and developments that needed to carry through to the next story.”

Webb believes the close relationships between the four authors also really helped. “Peggy, Regan, Vicki, and I have been friends for many years,” she says. “We were all completely committed to the project. It never entered my mind as I was writing that the story wasn’t totally mine. I’m certain Vicki, Peggy, and Regan felt the same way. Honestly, it was a breeze. We all fell completely in love with the town and the characters.”

Speaking of characters, the protagonist in THE DEAD GIRL is the aforementioned Laney Holt.

Yet, as it’s a shared series, Laney’s fate was then presumably is in the hands of another writer. Webb says there was no danger of her ever becoming overprotective of her creation. “Literally every aspect of pulling this together was fun.” And that reassurance didn’t only come the friendships. “Vicki, Peggy, and Regan are very talented ladies.”

Talent is something that Webb also has in plentiful supply. She’s had a stellar career to date: award-winning, USA Today bestselling author of more than 150 novels, and with more than four million books sold in numerous languages and countries. That success has come from a mix of indie and traditional publication. The Breakdown series is self-published, which Webb enjoyed. “I think the most fascinating aspect of self-publishing is the creative freedom not only editorially, but with packaging.”

For writers who are just starting off in their career, success like Webb’s can be a huge motivator. No debut author knows what’s lying ahead but Webb has a very simple piece of advice. “Stay focused. Write what you love!”

As for Webb, she’s still focusing. “I’m working on my new series, The Undertaker’s Daughter, for MIRA Books. Also, I’m planning a new series to self-publish next year.”

Debra Webb is the award-winning, USA Today bestselling author of more than 150 novels, including reader favorites The Faces of Evil, The Colby Agency, and the Shades of Death series. With more than four million books sold in numerous languages and countries, Debra’s love of storytelling goes back to her childhood on a farm in Alabama.

To learn more about Debra and her work, please visit her website.