The Dark Spectrum of YA Thrillers 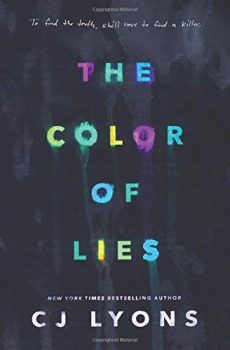 It’s not unusual for authors of bestselling adult fiction to dabble in writing for young adults, but the “turning point”—the event or circumstance or story gem—that points an author in a different direction is as random as pinpointing where ideas come from.

For C. J. Lyons, the inspiration to write for young adults stemmed from watching her niece and nephew struggle to find books that kept them engaged without pushing content boundaries.

“They’re both brilliant,” she says. “Really, not just proud auntie boasting. They were reading at a college level when they were seven and eight years old. Unfortunately, once they tore through the Harry Potter series and books like it, there really weren’t books they were interested in that didn’t have explicit sex and violence—what today they call ‘clean’ YA.”

Lyons admits she wrote her sci-fi young adult trilogy, The Stolen Futures, for them—with their input—and realized that she didn’t just love reading young adult literature. She found it much more freeing than writing for adults, where she often has to censor herself and pull back because of older readers’ sensibilities.

“I actually go much darker with my YA, not only in terms of plot twists, but also emotionally,” she says. “YA readers love emotionally honest characters, who despite their flaws and mistakes find the courage to change.”

That’s certainly the case with her new young adult thriller, THE COLOR OF LIES, a riveting story about a young girl with synesthesia—a kind of sensory criss-crossing that, in the case of high school senior Ella Cleary, gives her the ability to see people’s emotions via colorful auras.

“While synesthesia might sound like fun, there are forms that are very uncomfortable and actually end up isolating people from the outside world,” Lyons says. “For example, tasting words. You can’t unhear a word and can’t control a taste—so if the word ‘football’ tastes like baby poop, your life might be a bit unbearable. Or if you feel sounds, then simply venturing into the outside world can feel like being swept up in a tsunami of noise pounding you from every direction.”

In THE COLOR OF LIES, Ella believes her synesthesia reveals the truth that people hide routinely from each other and trusts it to help her navigate her way through the world. Until she meets a boy whose aura she can’t see. And he tells her that everything in her life is a lie.

Knowing that she needed a character strong enough to withstand the chaos she would put her through, the author says Ella was loosely based on a friend who plays the violin and one night described how she saw musical notes as colors.

“That gift helped her to quickly master complex pieces because she wasn’t memorizing them, she was visualizing them,” Lyons says. “Painting with music.”

As it turns out, synesthesia isn’t as rare as people think. In fact, studies suggest it’s twice as common as the gene that causes red hair. Regular viewers of the TV singing show The Voice will even recognize a similar condition in one of this season’s contestants.

The condition itself might not be that unique, but Lyons weaves it through the plot with the trademark elements of mystery and page-turning suspense for which she’s known—both in the YA and adult markets. Though her process is similar for each—Lyons is a die-hard pantser—she says she tends to go darker and deeper in her YA books, sans the violence and sex.

Her first YA thriller, Broken, features a sheltered, naïve protagonist who has already faced death—she’s literally dying of a broken heart—but learns that the greater challenge is how to cope with life. In Watched, the main character is the opposite of naïve—and is trapped in his misery until he receives a note that changes everything: You are not alone. I can help.

“We need more empathy in our world, not less,” she says. “This is why I created my trademark Thrillers with Heart, stories that explore the gray areas between the black and white of good and evil and where a happy ending comes at a price, just as in the real world.”

For her next book, Lyons will return to adult fiction with a dark suspense novel, tentatively titled The Widow Maker, the story of an ER doctor who saves the wrong patient and pays the price by provoking a serial killer.

Between The Lines: Lee Child by Josie Brown