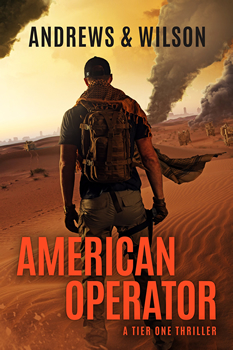 Between the two of them, authors Brian Andrews and Jeffrey Wilson have held the kind of careers most writers live vicariously through their characters—acting, firefighting, piloting a jet, performing trauma surgery. The writing duo have a wealth of experience from which they could craft stories.

The pair view their books as dual purpose—primarily to entertain, of course, but also to demonstrate, with as much authenticity as the genre will allow, what life as an elite Tier One Navy SEAL is truly like. Hint: it’s not quite the same as pop culture references might lead you to believe. Sorry, David Boreanaz.

“One of the things we spend far too much time doing is making sure that the books are authentic, but also accessible,” Andrews and Wilson say, noting that they don’t necessarily dumb down technology—that’s the fun stuff—but instead, are careful about making intentional story and character choices.

Dempsey, for instance, is certainly a protagonist fans can love—warts and all—but the whole “solo hero” concept is more fantasy than fact. The most successful military teams are those that work together, and while that’s a major factor in the real world, it’s harder to emulate in fiction—readers want a single point of view they can cheer for when chaos strikes. Someone they can count on to save the day.

In Andrews and Wilson’s latest release, AMERICAN OPERATOR, Dempsey is sent in to rescue undercover CIA operative—and chief of staff to the U.S. Ambassador to Turkey—Amanda Allen from the hands of brutal terrorists.

Make no mistake, though, Allen is no damsel in distress. She’s an example of the strong female characters Andrews and Wilson write into their books, and will continue to create not only to appease their growing fanbase—a good percentage of whom are women—and any societal awareness about gender equality, but also because it’s reflective of what’s happening in the world today.

“It’s not unrealistic to have women in this space,” the authors say. “Not as Navy SEALS—that isn’t authentic, yet—but we want to represent the strong women that are in these other high-ranking roles.” Women who perhaps, biologically, can’t match someone like Dempsey’s physical strength, but excel in other areas.

The situation Allen finds herself in isn’t pretty—but like many other plot points and themes in AMERICAN OPERATOR, that’s intentional too. The authors are, after all, writing about terrorists, and authenticity often dictates how a scene will play out. The reality is, in the hands of killers, women are inevitably most vulnerable—and readers unfamiliar with that world will have their eyes opened. Not in a graphic way, though.

“What we’ve learned from family and friends is that people want to be taught,” Andrews and Wilson say. “Readers want to learn—we just have to be subtle about it.”

Making decisions about these kinds of issues is no easy task, though it’s arguably made more bearable by their somewhat unorthodox writing partnership. The duo were friends before they started telling stories together, and while many co-authoring teams tend to separate characters or write back and forth in consecutive scenes, Andrews and Wilson brainstorm first, then divvy up the chapters, exchange pages, and finally, polish them to the point where neither knows who wrote what. The process makes “writer’s block” almost non-existent.

“That’s the secret sauce to co-authoring,” Andrews and Wilson say. “Those things that become hurdles when you write alone aren’t there. Collaborating is the fun part. There isn’t any ownership of the characters—we feel like they are our children. There’s no ego involved.”

That doesn’t mean there’s a lack of confidence. It’s evident that the authors are well within their comfort zone and almost every decision about character and story is a deliberate one—sometimes with a little luck peppered in. For instance, while the first three books in the series focused on Persia, AMERICAN OPERATOR explores the global interest in Russia. This allowed the authors to pit Dempsey against a more “complex bad guy.”

“We look like we’re prescient geniuses, but there’s been a lot of luck,” the authors say. “We wrote this book a long time ago but we do keep our feet in the space so we have some knowledge about what’s going on. The pieces started falling together. So…lucky break?”

The next two Dempsey novels—the duo tend to plan the series in three-book installments—will continue where AMERICAN OPERATOR leaves off, and the next Tier One story is well underway.

Though both authors have their own personal ambitions, the two foresee a long run for the series. Their hero has demons to slay, wars must be fought and conflicts resolved, and well, the authors simply enjoy working together.