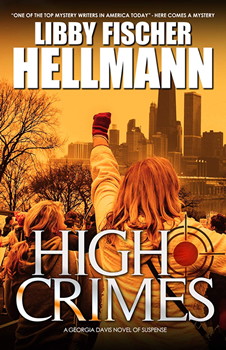 HIGH CRIMES, Libby Fischer Hellmann’s latest Georgia Davis thriller, is about justice, conspiracy and politics, and is “loosely based on” the Facebook group Investigation of the Trump-Russia Conspiracy in the 2016 Election, founded by Suzy Fischer.

In the novel, Hellmann’s Chicago P.I. Georgia Davis is challenged to pick out a murderer from the 42,000 suspects within a Facebook group. She’s hired to hunt down the conspirators responsible for organizing and ordering the assassination of resistance leader Dena Baldwin at a demonstration fourteen months after the 2016 U.S. presidential election. The shooter, too, dies within minutes of the shooting.

The sudden reappearance of Davis’s mother, who had abandoned her when she was a child, complicates her investigation. She now has to survive an emotional family crisis at the same time as she pursues killers determined to snuff her out.

Fischer Hellmann has won the IPPY and the Readers Choice Award multiple times. A finalist twice for the Anthony and four times for Foreword Magazine’s Book of the Year, she has also been nominated for the Agatha, the Shamus, and the Daphne. Her books have been translated into Spanish, German, Italian, and Chinese.

HIGH CRIMES’ blend of reality and concerns about governance and the mechanisms of democracy over the last two years provides the architecture of this gripping thriller. Front-page events such as Cambridge Analytica, money laundering, Charlottesville, and data-mining effortlessly feed the novel’s high-concept conspiracies.

The 2016 U.S. presidential election result ignited the spark and within a year Fischer Hellmann says she could perceive the premise for HIGH CRIMES.

“What if the founder of the anti-Trump Facebook group was murdered? Who could have done it and why? Oh, and, given the group’s numbers, there could well be 42,000 suspects. I knew right away my Chicago P.I. Georgia Davis was going to investigate.”

And she got down to the task with controlled imagination, determined research, and steely conviction.

Fischer Hellmann isn’t fussy about her writing environment, which may range from Chicago to France’s Aveyron valley, with every effort made to ensure that nobody around her suffers. Although she doesn’t follow a formal outline, she does make notes in separate “Put-in” and “Go-back” files, and writes extensive “character backstories.”

Actually, writing is not her first career. Her professional life took off in broadcasting, starting with NBC and then moving on to National Public Affairs Center for Television, which launched Robert MacNeil with Jim Lehrer and rebroadcast the Watergate hearings in 1973. After working for news syndication service TVN and PR firm Burson-Marsteller’s, she founded Fischer Hellmann Communications, which specializes in video production, speech writing, and spokesperson training.

Imperceptibly, these diverse talents had been converging into creative writing when fate took a hand. Simply put, she picked up the pen due to her sense of justice inspired by the 1995 O. J. Simpson case, joining a distinguished pedigree of committed writers that includes Emile Zola.

“First there were the characters,” Fischer Hellmann says. “Central Casting couldn’t have come up with a better collection: the earnest female prosecutor, the urbane, witty defense lawyer, the dullard judge with his laptop. The racist cop. There was even a California surfer dude, the requisite expert witnesses, and the avuncular king of defense lawyers.”

Then there were the forensics, she says.

“I knew nothing about police procedure, and less about forensics. DNA tests, blood spatter, the bloody glove, the footprints. I was fascinated by the way crimes could actually be investigated in a systematic way.”

Finally, of course, there was the denouement in October 1995.

“How absolutely noir an ending,” she says. “The victims are denied justice. The bad guy goes free. Chandler or Ross Macdonald couldn’t have done it better. I started my first novel four months later.”

But the real crunch came in 2007, when Simpson was arrested in Vegas for trying to steal his own memorabilia. “The injustice, the unfairness of it all … percolated up from my subconscious,” she says. “I have to admit that O. J. changed my life.”

Her outrage led her to support the resistance movement through the anti-Trump Facebook group, and a number of possibly overlapping conspiracies influenced her to integrate the headlines within the structure of a thriller.

Despite organizer and author L. A. Kauffman’s “single adjective” definition of the resistance movement, Libby is “not convinced that the Resistance is mostly female.”

Asked if the U.S. was going to see itself divided by gender, she replies, “To an extent it already is. But I don’t consider that as huge a divide as the polarization by race, economic status, or beliefs about individual entitlement.”

The last could very well be the theme of her next thriller.

Libby Fischer Hellmann left a career in broadcast news in Washington, DC and moved to Chicago over 35 years ago, where she, naturally, began to write gritty crime fiction. Fifteen novels and twenty-five short stories later, she claims they’ll take her out of the Windy City feet first.

She has been nominated for many awards in the mystery and crime writing community and has even won a few. She has been a finalist twice for the Anthony and four times for Foreword Magazine’s Book of the Year. She has also been nominated for the Agatha, the Shamus, the Daphne, and has won the IPPY and the Readers Choice Award multiple times. Her books have been translated into Spanish, German, Italian, and Chinese. All her books are available in print, ebook, and audiobook formats.