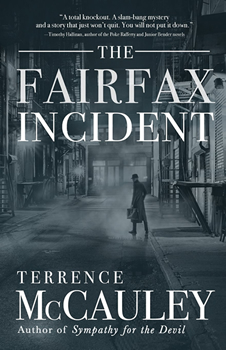 Set in 1933, THE FAIRFAX INCIDENT by Terrence McCauley seems at first to be a traditional noir detective story with a Raymond Chandler-like vibe. However, it soon becomes apparent that Charlie Doherty is an evolved and nuanced private eye. Imbued with a sense of history and complex characters, there’s more than meets the eye at first glance in this novel—much like the case that Doherty takes on.

The novel begins with Doherty interviewing the widow of a wealthy New Yorker who appears to have committed suicide. However, the widow insists that her husband did not shoot himself. Thus begins a case that leads Doherty through a twisty plot filled with politics and intrigue.

The author’s earlier trio of thrillers was actually set in the near future, with some futuristic predictions that have already come to pass. In Sympathy for the Devil, for example, he incorporated the kind of fingerprint recognition technology that exists today but that was more predictive of the future when the book came out.

Now, he’s delving into the past with a series of novels set in the 1930s.

Several real-life events are woven into the story for historical context. In fact, it might be challenging to find a historical setting more interesting than 1930s New York City, rife with Depression-era events and politics. FDR had just taken office to begin what would become a 16-year term in the White House. Mobsters still called the shots in much of the city. There was still great wealth among those who weathered the economic crash. However, there was also terrible poverty described in the Hooverville camps (named for President Herbert Hoover) made up of penniless homeless men.

“There were several Hoovervilles all over New York, with the biggest in Central Park,” McCauley says. “New York was a really different and dangerous place.”

The threatening political dynamic leading up to WWII plays a role in the story. The economic conditions have sparked an American brand of Nazism that is all the more chilling for its historical accuracy.

As a Bronx native, this is an author who eagerly shares his knowledge of New York history, including what used to be located at familiar landmarks. For example, McCauley points out that what is now the UN district was once home to vast slaughterhouses.

In writing historical fiction, there is the tricky matter of avoiding anachronisms.

As McCauley puts it, “I was confronted with the technology back then.”

Obviously, there were no smartphones in 1933. But what about pay phones? What did a cup of coffee cost? How would a private eye go about researching a company or a person? (Hint: it helps that McCauley’s sleuth has a friend at the New York Public Library.) The historical landscape has its own challenges to navigate when building a plot.

McCauley also did his research into the rough stuff. He said that when writing about weaponry, he’s trying to write as accurately as possible without the story becoming a “textbook on armaments.”

McCauley still lives in the Bronx, commuting to work in Manhattan. On weekends, he travels to Duchess County, New York, about 86 miles from the city. All of that commuting gives him time to work. He pecks out around 500 words on his iPad during the morning commute, and another 500 words on the trip home. He says these sessions are as much about notetaking as writing.

Working on an iPad in a cramped commuter train isn’t always easy. “It’s physically painful after a while,” he says. “I have to do it sparingly.”

On the weekends, he assembles these batches of words and dialogue and notes into coherent chapters. Train ride by train ride, weekend by weekend, his novel begins to take shape.

“I do my actual writing on the weekends,” he says. “I really ramp it up.”

One thing for sure is that there is no shortage of stories to write. A whole shelf of writing awards is testament to that.

When choosing what to write, McCauley says he is guided by what publishers are looking for, as well as feedback from readers.

“I’ve listened to the public and I’ve grown as a writer,” he says. “Choosing what to write is an interactive process.”

His character has evolved through several previous novellas and novels. Interestingly, sleuth Charlie Doherty also appears in the award-winning World War I novella, The Devil Dogs of Belleau Wood.

In THE FAIRFAX INCIDENT, McCauley says, “I wanted to focus on Charlie.”

Recently, he shifted gears even further back in the historical timeline to write a western for Pinnacle Books, Where the Bullets Fly.

McCauley researched by reading a lot about that time period—and even watching a few westerns.

He says that what he learned burst a lot of myths about the Wild West, which is often portrayed as more of a Hollywood version than the reality he discovered.

Compared to readers for thrillers and detective novels, “It’s a different audience,” he says. “They’re also very loyal readers. When they find a writer they like, they stick with him.”

Judging by McCauley’s multiple award-winning books, it appears that readers will be sticking with this adaptable writer for some time to come. 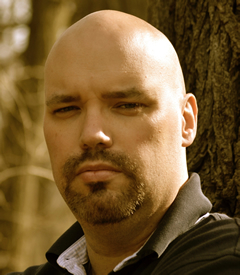 Terrence P. McCauley is an award-winning writer of crime fiction and thrillers. The third novel in his University Series, A Conspiracy of Ravens, is available in all bookstores and e-book formats. The other novels in the series, Sympathy for the Devil and A Murder of Crows were also published by Polis Books. Terrence has also written two award-winning novels set in 1930 New York City – Prohibition and Slow Burn.

In 2017, Terrence’s World War I novella, The Devil Dogs of Belleau Wood, won the Silver Medal for Historical Fiction from the Military Writers Society of America. Proceeds from sales go directly to benefit the Semper Fi Fund.

To learn more about Terrence and his work, please visit his website.