The Art of Capturing Valor 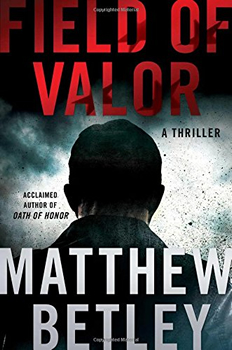 While Matthew Betley’s debut, Overwatch, dealt with a man bent on revenge against America, the follow-up, Oath of Honor, expanded the threat to a global level. Now, in FIELD OF VALOR, the president of the United States wants Logan West to form a covert task force with the mission of dismantling a nameless enemy. With the full resources of the Justice Department, the intelligence community, and the military—not to mention presidential pardons pre-signed—Logan must battle a secret organization with the connections and funding to rival many first-world nations.

Betley is very particular when it comes to titles, although he knows most original titles don’t survive first contact with publishers. Originally, he had envisioned his tale with the title of Rogue Republic, but Simon & Schuster countered with FIELD OF VALOR, and the author conceded, especially because of the expansive battlefield in and around Washington, D.C. where the story unfolds.

“As my readers know, I write very intense, emotional, action-packed stories, which are things that in reality take a toll on people psychologically and emotionally,” Betley says. “Logan is still in a dark place after the events of Oath of Honor, struggling to keep his rage in check, and we thought this cover would depict that a little more and connect with the readers on a personal level.” This is reflected in a style change of the covers from the previous two books to FIELD OF VALOR.

Although each of his books can be read and enjoyed individually, there’s an underlying story arc evolving from one book to the next. “The big reveal was always planned for this one,” he says. “I just hope that readers are pleased with how I’ve addressed it, opening up new possibilities and tangents for future stories.”

He continues: “I view these stories as part of an adult literary amusement park, where the stories are all interconnected. It´s also why I intend, with my publisher’s approval, of course, to branch off with characters that readers have met, in either this book or previous ones.  I think readers would enjoy it, and I know I would enjoy writing them.”

Research is one of the hardest aspects of writing, but it can also be where authors get to have the most fun during the initial writing process. For FIELD OF VALOR, Betley conducted online searches about submersibles and yachts, taking hours of virtual tours to learn the mechanics and on the ground research as well. “I’m particularly proud of the fact that I was given a private tour by one of the docents at the National Cathedral for the sequence that takes place there.” He also spent a morning at the Udvar-Hazy Center, speaking to docents and taking many photographs.

Then again, location isn´t everything. For Betley, it’s all about the characters. “I’d like to think I could take my team and drop them inside a Chick-fil-A and make it wildly entertaining.  You never know—I just might do that,” he says.

Speaking of characters, there were two additions to Task Force Ares in the previous novel, and they are here to stay.  “A lot of feedback I received on Overwatch was that I should have a female protagonist, which then made me want to create a task force centered on core characters.  Thus, you have Amira and Cole, which readers seem to have responded to enthusiastically.” 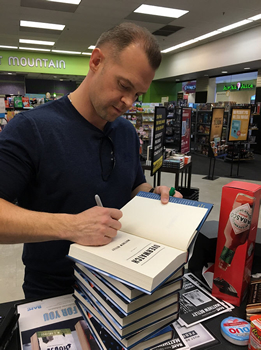 Betley writes with a very visual style; so it’s no surprise Hollywood showed an interest. “We were thrilled to finally reach a deal for the movie franchise with Thunder Road Pictures, an amazing company that has produced the John Wick series and Sicario.” The adaptation of Overwatch is moving forward with Braden Afterwood set to produce. “I’m extremely excited to see where this goes, as I know the entire team will deliver an A+ product for audiences to enjoy.”

When discussing his process for writing, Betley says it hasn´t changed that much. “It definitely feels easier, though, but I think that’s more of a function of the fact that I know what I’m going to write before I sit down.“ He admits he has become a more disciplined editor, which means his publisher gets a polished draft.

“I heard a tip from Steve Berry at Thrillerfest in 2016 when I was a debut, and I took it to heart and acted upon it,” Betley says. “He writes a major section, goes back, edits it, writes the next section, goes back, edits both, and so on and so on, so that by the time he hits the end, the rest of the book has been edited up to 7 times or so.  It’s smart advice for any writer.”