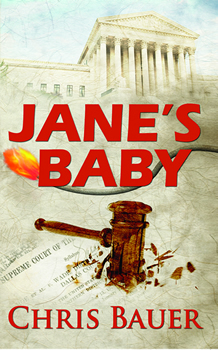 The motion of Norma McCorvey (1947-2017), the anonymous plaintiff of the landmark U.S. Supreme Court women’s rights case Roe v Wade, was first argued in 1971, when abortion was illegal. With the judgment being announced in 1973, Norma was unable to terminate her pregnancy, gave birth and her baby went into closed adoption. As such, no identifying information was available to either family.

So, whatever happened to Jane Roe’s baby?

That’s what Bauer’s new thriller is all about.

The Jane Roe real-life child would now be a woman in her late forties, the potential of her polarizing celebrity unknown to her.

In Bauer’s version, a religious rights splinter group has blackmailed its way into learning her identity—she happens to be a political leader with firm convictions. A new Supreme Court case is in process.

Tourette’s-afflicted bounty hunter Judge Drury, a retired Marine, stands in the way of the splinter group’s attempt at stacking the Supreme Court via blackmail, murder, arson, sleight of hand, and secret identities.

Hardly surprising, then, that Alan Russell, bestselling author of Burning Man, says, “Chris Bauer came up with a doozy of a ‘what if’ question in JANE’S BABY. I just wish I had thought of it myself.”

Like all debates world-wide over moral choices, the pro-life and pro-choice core of reproductive politics defies consensus. The debate will continue to seesaw on compromises between those who hold political power, the ones who don’t, and shades of opinion that overlap the political spectrum. The weapons wielded are polarizing moral certitudes, re-phrased and repeated to uphold the position of choice. Each side brandishes its equally qualified “experts.” Confrontation tends to feed bitterness and the losing side of each phase locks and loads for the next skirmish.

In other words, a marsh with its own inland sirens waiting to lure writers.

Not for Bauer, who can glide over quicksand. Had he straight off picked—or rather picked on—the abortion debate, he could have smeared himself with it and been accused of overkill. But in JANE’S BABY he gets off scot free while spinning a great yarn and morphing one of the most delicate and divisive issues of modern America into an enthralling read.

And it’s not just the uniqueness of the what-if.

He’s been a natural storyteller from the time he stuck his nose into the Tom Swift series, and graduated, in his own words, to “love stories with twists, underdogs, good guys, and bad guys.”

That certainly served him well as he nimbly skipped from the anxieties and cold analysis of the corporate world into the daunting challenge of novel writing.

In describing Scars On The Face of God, Bauer’s first novel,  Jonathan Maberry, New York Times bestselling author and multiple Bram Stoker Award winner, says, “(it) is a brilliant novel. Congratulations on hitting one out of the park, Chris.”

Bauer’s process will be familiar to many writers.

“I plan via a casual outline, the first few chapters without having a completed outline,” Bauer says. “I want to feel the rush/thrill of having created something before doing the real work of thinking it all the way through. For JANE’S BABY, a thriller, I needed good guys, bad guys, catalysts, victims, and sidekicks.

“I write full time. When I was holding down a full-time corporate job I’d be up and out of bed with coffee at four a.m. …still get up at four a.m. or thereabouts, sometimes earlier, seven days a week.”

That last bit should be noted by all aspiring writers.

Not the unholy wake-up time, but the shrine to hard work at any expense, overriding temptation.

Bauer has chalked up two novels, has a third finished, and America is a Gun and Dirty Pool are in the works, keeping the JANE’S BABY characters alive.

What intrigued Bauer in Roe versus Wade was people’s ignorance about the birth of the baby. The rest, as they say, is asking the right questions—which he did.

“ …a closed adoption with sealed records, where the biological mother and the adopting parents did not know each other … if (the child) were discovered as Jane Roe’s baby, would that put a target on her back?”

From there, it’s only a short hop to reasoning who could possibly have the motive for putting a target on Jane Roe’s baby, now a grown woman. That brings different forces and lobbies rushing into the picture in relation to what this lady could possibly be. From a peacenik hippie to a pop star to a drug queen to a terrorist is anybody’s guess. But JANE’S BABY adroitly puts her in politics, and she takes a moral stand that threatens the agenda of the splinter group of a bunch of extremists who “put a target on her back.”

The next logical question that comes to mind is who would protect her and that calls up a line of hard guys fidgeting in the queue. And then it all comes — conflict built around a burning issue and characters who can never stop developing and hooking readers. The plot is sound and well-controlled, the story finishes but the characters remain. No single book can hold them in. It’s not that Bauer wants to write three thrillers in a series. It’s what the dimensions of his characters require, so he is left with little choice.

And he has delivered.

Chris Bauer is the author of JANE’S BABY, a political conspiracy thriller from Intrigue Publishing, release date June 1, 2018, and the horror/thriller Scars on the Face of God, 2010 EPIC Awards runner-up for best in eBook horror. A Philly native, he’s had lengthy stops as an adult in Michigan and Connecticut, and he thinks Pittsburgh is a great city even though some of his fictional characters don’t. Prefers pie over turkey. Chris lives in Doylestown, PA with his wife Terry and supermutts Rory and Maeby Funke Bauer. His short fiction has appeared in THUGLIT, SHROUD MAGAZINE, and 100 HORRORS, and has been podcasted by WELL TOLD TALES. Is a member of International Thriller Writers and the Horror Writers Association.