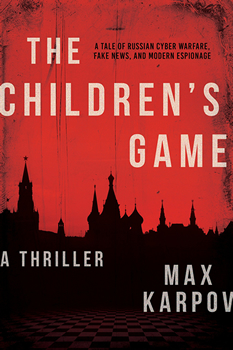 It’s early morning in Florida, that time before the heat really sets in, and Max Karpov, author of the political thriller THE CHILDREN’S GAME, is writing under the canopy of trees in his yard and listening to the canal flowing behind his house. A runner, traveler, and journalist, Karpov always finds inspiration from the outdoors, which is why he initially plans his books at the beach. Some of those books are for HarperCollins as part of the Bowers-Hunter mystery series, which he pens under the name James Lilliefors.

But Karpov tells me the stimulus for his latest novel THE CHILDREN’S GAME “started almost as an investigative story, with an idea. Russia’s disinformation industry and its cyber-warfare capabilities were topics that have long interested me. It seemed pretty clear four years ago, when I started researching the book, that Russia was making preparations for a war against the West that the United States, and other nations, weren’t really ready to fight. We’re in that war now.”

Since Karpov is a career journalist who is used to working with facts, I wondered where the line is between fiction and non-fiction in a novel like this.

“Much of the story is drawn from real events or, in some cases, real ‘fake’ events,” he says. “For example: when the Malaysian Airlines MH17 was shot down over eastern Ukraine in July 2014 (killing 283 passengers and 15 crew members) Russia circulated false ‘news’ stories saying the attack had been a botched attempt by the Ukrainian government to assassinate President Putin, whose plane was returning to Russia from South America that same day. In truth, of course, Russia itself has now been tied to the attack. I used those details and fictionalized them in the novel.”

The impact of disinformation is a dominant theme in THE CHILDREN’S GAME, and Karpov tackled the subject as one would expect from a journalist/novelist by digging well beyond what the story required, one piece of information leading to another and always opening new lines of inquiry. “I did a lot of reading initially,” he says. “And then, as the story developed, I went to some experts with specific questions about Russia and the intelligence community. I have a family member who worked for the CIA for a number of years; she lets me pick her brain occasionally.”

Which hits upon the ways Karpov tried to avoid cultural appropriation and political bias. In order to balance the U.S. and Russian perspectives, he introduced the Russian characters Ivan Delkov and Andrei Turov. Telling the story from multiple points of view served Max well. “While some U.S. observers see Russia as a kleptocracy run by a ruthless former KGB man, the book also shows how some in Russia see the U.S. as a decadent, arrogant nation, trying to forcibly export its concept of democracy around the world like a fast-food franchise. One journalist I contacted several months ago (who is based in Moscow) thought the ‘ideology’ of the book was too pro-U.S. An American author thought the book seemed too favorable toward Russia. I liked that it got both of those reactions.”

And what about the reaction to the title? “THE CHILDREN’S GAME, as presented in the book, is a Russian term for beginner’s mate in chess and also the code name for the operation that Russia is running against the U.S. The idea is that in just four moves, Russia could exploit existing weaknesses and divisions in the States, causing our country to break apart from within (meanwhile restoring Russia to great nation status – Putin’s objective).”

Karpov agrees that the concept feels rather prescient. “Despite having the world’s most powerful military, the U.S. has fallen behind in the non-military war Russia is waging. Moscow has a massive disinformation program, including troll factories and cyber warfare capabilities; Washington doesn’t have an equivalent operation or effective counter-measures. And there are moral and ethical questions over how far we want to go in developing them — what the long-term effects would be of escalating this war.

“In a sense, THE CHILDREN’S GAME is a war story. By using the weapons of disinformation, Russia is waging war not only on Western ideologies but on the concept of truth. Those are some big stakes.”

Obviously, readers and critics agree that Karpov has presented these stakes in an intelligent and entertaining manner because he has been likened to many great thriller writers such as Daniel Silva and Nelson DeMille.

“I’m very grateful that the book received the endorsement of several top thriller writers, whose work I admire. I was also honored that Michael Morell, the former acting director and deputy director of the CIA, liked the book and contributed a blurb. He said the book ‘…captures perfectly the mentality of Vladimir Putin’s Russia’.”

Heavy stuff. So how does a guy like Karpov lighten the mood in real life? “I enjoy traveling, hiking, running…I started my journalism career with Runner’s World magazine and used to run marathons. I still run most every day.” He’s also into art and music. In fact, his wife Janet is a pianist and also a composer. “Some years ago, we co-wrote the alma mater for Florida Gulf Coast University together (with Dr. Jack Crocker), which is still sung at graduation ceremonies there today.”

And, when he and Janet aren’t off writing college alma maters and visiting art museums around the world in places like Venice, Switzerland, and Paris? They can be found at their Florida home, either out in the yard under the trees or when that heat kicks in or the showers pop up, in the study, listening to anything from Tchaikovsky to Springsteen and snuggling with a very affectionate cat named Mandy.

Exactly what you would expect from the author of a masterful and tense political thriller, right?

(Max Karpov is a pseudonym).

Heidi Ruby Miller
Heidi Ruby Miller uses research for her stories as an excuse to roam the globe. Her books include the popular AMBASADORA series and the award-winning writing guide MANY GENRES, ONE CRAFT. In between trips, Heidi teaches creative writing at Seton Hill University, where she graduated from their renowned Writing Popular Fiction Graduate Program the same month she appeared on Who Wants To Be A Millionaire. Heidi lives near Pittsburgh with her award-winning writer husband, Jason Jack Miller, and a sweet little kitty.