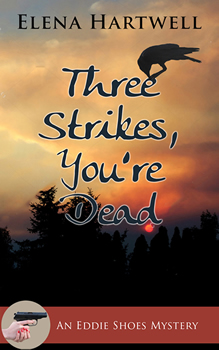 On a mother-daughter getaway weekend, PI Edwina Schultz, better known as Eddie Shoes, stumbles upon a gravely injured man. Before he dies, the man begs her to find his missing daughter. But how will Eddie find the girl with nothing but her memory of the dead man’s face and a photo of his daughter to go on?

THREE STRIKES, YOU’RE DEAD is the third installment in playwright-turned-novelist Elena Hartwell’s Eddie Shoes private investigator series. Hartwell’s fast-paced mysteries have garnered praise from the likes of Paradox Unbound author Peter Clines, who called Eddie “the most fun detective since Richard Castle stumbled into the 12th precinct,” and InD’tale Magazine, which said, “This quirky combination of a mother-daughter reunion turned crime-fighting duo will captivate readers.” The Big Thrill caught up with Hartwell for a wide-ranging discussion about characters, the differences between mystery and suspense, and of course, her latest novel.

Asked about handling the backstory from the earlier novels, Hartwell says, “It’s a balancing act. Each novel needs to be a standalone and simultaneously, a continuation… [The challenge is] how to drop just enough information to pique the interest for a reader about what has happened in the past, without giving anything away.” For the most part, Hartwell focuses on events still impacting her characters. “I consider how what happened in the last book would still be in their thoughts or actions, and use that to bring in a little from the earlier books.”

Hartwell talks a lot about characters, which seem to be her forte. “I’ve always been intrigued by human interactions and relationships,” she says. “Why people do what they do is as interesting to me as what they do.” Starting with an idea about a character, who that person is, and what they’re doing, Hartwell develops a plot driven by what these specific people would do in any given moment.

Her unique protagonists, a mother/daughter crime fighting team, have created a special niche for Hartwell. “I like to joke that my PI, Eddie Shoes, is the love child of Kinsey Millhone and James Rockford [of The Rockford Files],” she says. “[James’ father] Rocky didn’t show up all the time, but that dynamic stuck with me. There was something funny to me about a parent wanting to participate in the child’s work life rather than the other way around. … Chava, Eddie’s mother, is my age. Eddie is a lot younger, so it allows me to have characters with the perspective of both my current and my former self. I understand [their personal journeys] on a visceral level because I’ve experienced them.”

Complex family dynamics, then, are a big part of this series. The family has evolved over the course of three novels, as more of their background and relationships are revealed in each installment. Eddie, a rules-follower, is the most cautious member of the family. Chava’s in the middle, a fun-loving risk-taker. Eddie’s mob-connected father, Eduardo, is at the far end of the spectrum—someone who lives outside the normal boundaries of society. “That continuum lets me play with going outside the law without my protagonist always having to be the one who crosses the line,” says Hartwell.

While Eddie drives the stories, Hartwell notes that her character is very aware of how much influence her parents have on her. “I believe in our twenties, we’re defining our work path,” says Hartwell. “In our thirties, we’re defining ourselves. In our forties, we’re defining our place in the larger world.” Chava considers the larger picture and how she fits, which is why she’s come back to re-engage with her daughter. Eduardo is more at peace with who he is and what the world is like. Extremely practical, he’s come full circle. Though he wasn’t around for Eddie’s childhood, he’s defining what he wants to do with the second half of his life and where being a father fits into it.

Having such diverse characters allows Hartwell’s themes to emerge naturally. “My hope is that through spending time with my fictional characters, readers will come away with a little more compassion for others in the real world,” she says. “I like to remind people that we have more in common than we realize with people who don’t look like us.”

Hartwell says Eddie’s half-Jewish, half-Latina heritage gives her a chance to explore cultural issues from different perspectives. “I get to write about the complexities of our culture in a different way than if my characters were white and middle-class,” she says. “Eddie looks like her father—dark hair, dark skin—but her upbringing was as a white person, which is how she identifies herself.”

She continues, “[During grad school,] we were having a discussion on race and a student surprised us by stating he saw himself as white.” The student, Hartwell explains, was Hispanic, but he was born in the U.S. to a Caucasian mother and lived in a predominantly Anglo community. “That moment stuck with me—how what people expect from us isn’t always how we feel,” she says. “While I can’t understand what it is to be brown-skinned or Jewish in a community that can be cruel to both, I can understand what it feels like to be judged.”

But Hartwell believes that racial and ethnic differences are only part of the picture. “Many parts of the human experience are universal,” she says. “Fears about aging. Trying to find love. Wanting our family members to be safe and healthy. Searching for meaning. Working toward justice. Those things can be experienced regardless of a person’s race. Simultaneously, what we look like on the outside impacts how people treat us, so some of the ‘universal experiences’ have different parameters based on our race, religion, ethnicity, or sexual orientation.” She hopes readers relate to and connect with the characters so when something negative happens to them, the reader feels that pain along with the character. “My hope is for readers to walk a few miles in my characters’ shoes and come out at the other end with the realization that the characters represented them, even if they aren’t identical.”

We wrapped with a discussion about whether mysteries need an element of suspense these days rather than focusing on the puzzle-story. Hartwell’s take is, “while we’re reading, we enjoy the twists in a plot. We love to try to solve the crime alongside the characters. But what brings us back to a series is the characters. We want to relate to them and what they’re going through.”

Hartwell urges writers to remember that a genuine, honest character—regardless of their gender, ethnicity, or any other characteristic that might outwardly define them—represents humanity. “If they are done well, any character can represent an aspect of us,” she says. “That might be how we’d react to danger or how we feel in a relationship or as a parent. … Suspense forces us to root for a character in a way solving a straight puzzle doesn’t.”

After years in the theater, Elena Hartwell turned her dramatic skills to fiction. She writes the Eddie Shoes Mystery series. One Dead, Two to Go received four nominations for “best mystery of 2016.” Two Heads are Deader Than One launched April 15, 2017. InD’Tale’s five-star review: “…a delightful heroine in a story that promises pleasant romance and a hint of danger with a twist of an ending.” She can usually be found in the tiny town of North Bend, WA, with her hubby, their dog, two horses, and trio of cats.