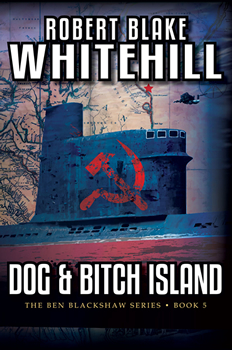 Ben Blackshaw’s old friend Travis Cynter is dead. Cynter was Blackshaw’s comrade-in-arms in the U.S. Navy SEALs. He was killed in full tactical gear during a black-ops mission on American soil. FBI Agents Molly Wilde and Pershing Lowry try to draw Blackshaw into helping them solve Cynter’s murder. The agents need Blackshaw because the case landed in their laps from an American intelligence agency with overseas interests. From two previous cases, these Feds have come to appreciate how Blackshaw can work in the shadows, off the books, and be easily disavowed should his investigations implode.

Blackshaw is torn. He has a longstanding mistrust of doing any kind of clandestine work for government intelligence agencies. In fact, when patriotism has led him to do the right thing in the past, usually against his better judgment and instincts, his friends and loved ones have suffered; many have died. Helping Wilde and Lowry always comes at too great a cost. This unhappy history weighs heavily against Blackshaw’s profound desire to solve the mystery of Travis Cynter’s death. Should he serve with patriotic duty to an ideal that might not exist, or act with honor to clear the name of his murdered friend?

Against the wishes of LuAnna, Blackshaw’s expectant wife, and contrary to the grim and hard-won advice of his friend Knocker Ellis Hogan, Blackshaw reluctantly launches the investigation with a close study of the murder scene on Dog & Bitch Island near Ocean City, Maryland. The trio finds the exact spot where Travis Cynter died. It is LuAnna who discovers a clue which spins the team into a deadly transatlantic chase; she quickly learns that the Feds have not told them the whole truth about Cynter’s final mission.

Thanks to Ellis’s wisdom and wealth, and LuAnna’s independent deductive logic, Blackshaw operates like a small covert agency unto himself. Along the way, he tangles with an old enemy, discovers an unfinished SEAL mission, and cuts out rot at the highest levels of government, including a scandal that could rally terrorists the world over. And it is all controlled by the iron hand of a shadowy syndicate called Faction.

I hope readers will take away lost sleep, missed train stops, and chest pains from a mild cardiac event from reading DOG & BITCH ISLAND. I also hope they’ll continue to expect the unexpected from Ben Blackshaw and his family and friends, and look forward to the Blackshaw feature films. A reader gives every book I write about 10 to 13 precious hours, or roughly 50 thousand nonrefundable heartbeats. I take that investment very seriously. I want them to have a total blast, no regrets.

This book brings a powerful action couple to the thriller genre. Though the franchise started with Ben Blackshaw at the center of things, his wife LuAnna is growing in stature here in Book 5 as the series continues to develop. The idea of a couple working together to finish a mission is rare. Ben and LuAnna strike me as a Smith Island iteration of Nick and Nora Charles, just as clever, but with more gunfire, and less alcohol (LuAnna is pregnant).

I was delighted at how independent and unique LuAnna Blackshaw is becoming with each successive title in the series. She is not some shadow or talk-to character who happens to be married to Ben Blackshaw, the anchor character of the Blackshaw franchise. LuAnna is witty, fearless, innovative, and constantly challenges Blackshaw’s understanding of who she is, though he has known her all his life. It’s terrific when a childhood sweetheart makes you fall in love afresh every day. I try to write strong, real, inspiring female characters, and LuAnna is becoming someone for me to be proud of. Soon, I might know LuAnna well enough to write a book solely about her own adventures.

Knocker Ellis Hogan, who by all appearances lives a very simple life, is tremendously wealthy, and on this mission can bankroll Blackshaw’s investigation into the death of his friend as if he is a small black-ops agency unto himself.

Growing up on the Chesapeake Bay churned up an early fascination with Herman Melville, Jules Verne, and Patrick O’Brian for their wonderful seagoing adventures. I revel in the dark and troubled characters of James Lee Burke and Alafair Burke. Scott Smith really knows how to yarn; his A Simple Plan inspired the first Blackshaw book, Deadrise. Every title in Lee Child’s Jack Reacher books is a heart-pounding education in creating riveting characters amidst spare, streamlined storytelling.

Robert Blake Whitehill is a Maryland Eastern Shore native, and an award-winning screenwriter at the Hamptons International Film Festival, and the Hudson Valley Film Festival. He is also an Alfred P. Sloan Foundation award winner for his feature script U.X.O. (Unexploded Ordnance). A proud member of International Thriller Writers, Whitehill is also a contributing writer to Chesapeake Bay Magazine and The Audiophile Voice. Deadrise, Nitro Express, Tap Rack Bang, Geronimo, and DOG & BITCH ISLAND are the first five novels of the Ben Blackshaw Series, the first three of which Whitehill is adapting into feature screenplays.

Find out more about the author, his blog, upcoming releases and speaking engagements, and the Chesapeake Bay on his website.

The Children’s Game by Max Karpov

Dead Guy in the Bathtub by Paul Greenberg