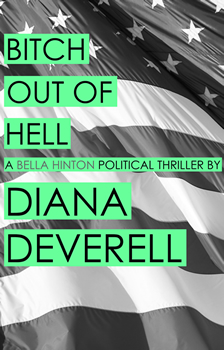 In BITCH OUT OF HELL, Bella Hinton, a career personal protection professional, was headhunted away from the State Department seven years ago by Caprock Worldwide, a high-end private security company.

Bella got Caprock’s runaway cowboy culture under control, but in today’s Washington, diplomacy is out and mercenary armies are in. New corporate leadership believes that returning to the old ways will maximize profits—but they have to get rid of Bella first. And they figure firing the bitch will be easy.

“Piss-poor at threat assessment,” is how Bella assesses them. She sets out to prove them wrong.

Deverell’s short stories have appeared in Alfred Hitchcock Mystery Magazine, Mystery Weekly, Fiction River, and Switchblade. The Big Thrill caught up with Deverell and asked her a few questions about the inspiration behind BITCH OUT OF HELL.

After the 2016 presidential election, I couldn’t tear my eyes away from what was happening in Washington. Bella finally yelled loud enough to penetrate my daily news fix.  She saw a thriller buried in my inadvertent research, and she insisted she was the right person to star in it.

I quickly grasped that she was the perfect narrator. Well-seasoned, Bella’s been in my thriller cast since the Cold War, when she served as Regional Security Officer at the Warsaw embassy. After 25 years working in embassies and Foggy Bottom, she left to join a private security contractor eager to clean up his act.

She regained the State Department personal protection contracts lost after Caprock’s predecessor company screwed up in Baghdad.  But now she’s fired, ostensibly because of an incident in Dhaka.

Bella tells that Dhaka story in my short thriller story “Payback is a Bitch” which will appear in Fiction River – Pulse Pounders: Countdown, a themed anthology magazine edited by Kevin J. Anderson. When I wrote it, I fell in love with Bella’s smart mouth.

Is there anything special you’d like to tell us about BITCH OUT OF HELL?

Bella’s been working security since before most of the company’s bodyguards were born.  She reads them easier than a toddler board-book.  Two minutes into an interview, she knows when a recruit won’t follow her rules.

Bella’s tough, as you’ll hear when she tells about birthing her daughter via C-section with no anesthetic. Her long, jagged scar looks like the lightning bolt graphic they put on electrocution-danger signs. Bella says it’s a warning to anyone who sees her naked that she’s lethal.

Never a soldier, she got her only battlefield injury in the Cold War when she was dusted with Chernobyl fallout. She thinks that’s why, when her employees do stupid things, she goes nuclear.

Don’t underestimate a 57-year-old woman who’s spent her professional career guaranteeing security for other people. You see a harmless old bat enjoying her retirement. But look closer and you may find a bitch out of hell plotting to take down the prince of darkness.

After Fiction River comes out on July 31, I’ll use “Payback is a Bitch” to promote BITCH OUT OF HELL.

To set that up, I had a soft launch of the novel in January, inviting newsletter subscribers and Facebook followers to pre-order at a bargain advance sale price. By now, some flattering reviews are up at online retailers, and I hope for more buzz.

In August, I’ll begin using the story as gateway to the novel. I’ll first target Fiction River readers. After the story pub rights revert to me, I’ll widen my audience via bundling with other writers, drawing more newsletter subscribers, and similar tactics.

I’m working on the sixth book in my legal thriller series. Nora Dockson, my ex-con turned appeals attorney, works in Washington state, where recreational marijuana use is legal. She does not agree with the Attorney General on recriminalizing marijuana, draconian sentencing, mass incarceration, or privatizing prisons. I pick fictional fights with Washington DC from the West Coast, too.

A native Oregonian, Diana Deverell was a US Foreign Service Officer and served in Washington DC, San Salvador, and Warsaw, before she moved to rural Denmark to write full time.

Her new release, BITCH OUT OF HELL, is a political thriller featuring security pro Bella Hinton. Bella also stars in “Payback is a Bitch,” a short story appearing in the May 2018 issue of Fiction River: Justice, an original anthology magazine edited by Kevin J. Anderson.

Diana debuted as a published writer in 1998 with 12 Drummers Drumming, her first international thriller and the four-book series has now spun off Bella’s first-person story set in contemporary Washington DC.