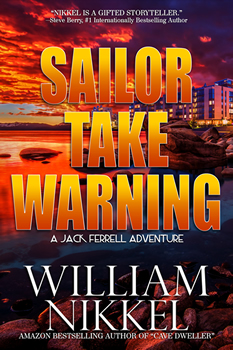 Even in winter we sometimes crave a good beach read. And if you’re looking for an intelligent thriller that smoothly merges mystery with high speed adventure, pick up SAILOR TAKE WARNING by William Nikkel.

In his seventh recorded adventure, Jack Ferrell is spending time at Lake Tahoe to get a break from Hawaii. He soon finds himself entangled in a web of violence and death in the seedy world of coin fraud, blackmail, and lost treasure. Why is he so entangled? Because as the author puts it, Ferrell is a lady’s man, and a sucker for a pair of doe eyes that gets him into trouble every time.

“If someone needs help, he’s quick to rush to the rescue,” says Nikkel. “A take care of business kind of guy—a man’s man who’s willing to put his life on the line when necessary. But he doesn’t see himself as a hero. Only as a person who does what needs doing.”

This time Ferrell finds himself the target of a vengeance-driven man named Ryan Chambers who wants the gold and Jack’s head on a platter. Like all good villains, Chambers is a business man enamored with wealth, and more so by his love for gold. And of course, he has a grand evil plan.

“His latest plot is a large-scale coin fraud scheme that will net him millions,” Nikkel says. “But when one of the fraudulent twenty-dollar gold pieces is thrust into Jack’s hand by a dying man, Jack is drawn into the enigma surrounding the double-eagle. Ryan Chambers’ problems don’t stop there. Not only does Jack have the coin, he also unknowing intercepts one of three clues leading to a century-and-a-half old cache of stolen gold that Cambers is after.”

Of course, Ferrell is not a man who gives up easily, and that makes him a target for Chambers and sets up a classic face-off between them. To deal with the bad guys, Ferrell often operates on the edge of the law. Nikkel knows just how to walk that line. As a former homicide detective and S.W.A.T. team member in Bakersfield, California, his understanding of how law enforcement works helps him bend the law, and not turn the story into a police procedural.

It’s clear that Nikkel knows the secret to writing a fast-paced story. “You need lots of action, short paragraphs and sentences, and lots of white space on a page,” he says. “And don’t bog the reader down with a lot of tedious backstory.”

This deep into the series, I wondered if there was a future for Jack Ferrell. Nikkel left no doubt that there will definitely be a book eight.

“He’ll be back in the Hawaiian islands with its tropical sunsets and suntanned ladies,” says Nikkel. “And when one of those lovelies shows up on his boat unexpectedly, her almost unbelievable story of betrayal and attempted murder puts him on the trail of drug traffickers.”

So if you’ve been waiting for the successor to Travis McGee’s heroic mantle, I suggest you grab a copy of SAILOR TAKE WARNING. 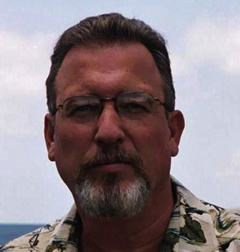 William Nikkel is the author of six Jack Ferrell novels, a Jack Ferrell novella, and a steampunk/zombie western series featuring his latest hero, Max Traver. A former homicide detective and S.W.A.T. team member for the Kern County Sheriff’s Department in Bakersfield, California, William is an amateur scuba enthusiast, gold prospector and artist, who can be found just about anywhere. He and his wife Karen divide their time between California and Maui, Hawaii.