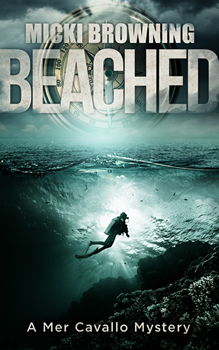 Thriller fans, let me introduce to you one outstanding writer. Micki Browning is a retired cop who has taken her lifetime of experience chasing the bad guys, and turned it around to create some amazing capers of her own…on paper, that is.

This month, Browning took some time out of her busy schedule to chat with The Big Thrill about the inspiration behind the characters—and plot—of her new release.

What can you tell us about BEACHED?

Mer’s life unravels after she finds a plastic-wrapped bundle floating on the waves off Key Largo. Curious, she pulls it aboard her dive boat and lands in the middle of a storm of intrigue involving an obscure legend, an eighteenth-century shipwreck, and a modern pirate who’ll resort to murder to claim the booty first.

Are Mer or any of the other characters in your books based on real life people you’ve known?

Key Largo is populated with colorful characters, but I write fiction. However, the Crocs that Captain Leroy Penninichols wears is a nod to a real-life captain I used to work with. Sadly, he passed away, but I am indebted to him for sharing so much of his maritime knowledge with me.

Tell us a little about yourself. Who is Micki Browning?

The short story is I’m an FBI National Academy graduate, who worked in municipal law enforcement for more than two decades and retired as a division commander. Now I’m a full-time writer.

I also write short stories and non-fiction. My work has appeared in dive magazines, anthologies, mystery magazines, and textbooks. I won the 2015 Daphne du Maurier Award for Excellence and the Royal Palm Literary Award for my debut mystery, Adrift.

I reside in Southern Florida with my partner in crime and a vast array of scuba equipment I use for “research.”

The quirkier bio adds that I’m a medievalist who loves fruitcake.

What led you to become a cop?

You served as a police officer in California and Colorado. How in the world did you end up in the Florida Keys?

Like Mer, I moved to the Keys for the diving. Law enforcement is a stressful job and after I retired, I needed to decompress a bit before figuring out what was next for me. Key Largo was the perfect place to figure that out.

What got you interested in scuba diving? Do you have any hair raising tales of adventures under the sea?

I first started diving while living in California and was immediately captivated by the life found in the kelp forests. It wasn’t until I moved to the Keys that I decided to become a professional divemaster. Some of my fondest experiences include cavern diving in Mexico, diving with Manta rays in Hawaii, jumping into the Epcot aquarium in Orlando, and any dive with a shark. Hair-raising underwater experiences are best avoided, but I did have an unexpected face-to-face encounter with a green moray eel. Let’s just say I don’t know who was more startled.

Reading your extended bio on your website I see we have something in common—a love of history. Have you always found the past fascinating, or was there a point in your life where your attention was grabbed by it?

As a child, I read Greek mythology and that first inspired my love of history. As I got older, I became enamored with Arthurian legends. That led to reading the Ulster Cycle, Norse mythology and Germanic heroic legends. The more I read, the more I wanted to know about the people who told the tales.

If there were any other era you’d like to live in, or at least visit for an extended vacation, when would it be?

History doesn’t always appreciate independent, outspoken women so this is a more difficult proposition than you might suppose. I think I’d prefer to pop in, witness an historic event, and pop out again, rather than plan an extended visit. It’s safer that way. As for events, I’d like to ride with Joan of Arc as she enters Orléans, have a front row pew to the coronation of England’s Queen Elizabeth (I and II), take in a Shakespearean play at the Globe, and have a rink-side seat for the 1996 Stanley Cup playoff game when the Colorado Avalanche won the title in triple overtime (a gal can dream).

And now for the final question that will let the readers delve deeper into heart and soul, the very nugget of existence at center of Micki Browning.

You are out taking an evening stroll along the beach, all alone with the sound of the surf, and the sand between your toes, when a largish silver metal cigar shaped object materializes fifty yards in front of you. A door slides open and a staircase descends. Two human-like beings start down the stairs, waving at you, they appear to be very nicely dressed, and they’re smiling.

“Hello!” they call out. “We’re looking for someone to join us on an adventure!”

“I wouldn’t go ‘dere,” rumbles a very deep Cockney accented voice that seems to be coming from above you. You turn to find a nine-foot tall troll dressed in a butler’s uniform holding a tray of hors d’oeuvres staring down at you from a few feet away. “Hi, I’m Gerald the Troll. And those aren’t nice men.”

You stare dumbfounded up at the grey skinned man-thing with lichen for eyebrows.

Your path is blocked. Do you trust Gerald? Or do you go with the well-dressed aliens?

Oh, I love me a tasty amuse bouche, but I’ve never known a professional butler to have a cockney accent. Likewise, I distrust anyone who arrives at the beach dressed for a business conference. Since I have my own adventures to pursue, I’d maneuver Gerald closer to the other gents, make a point of inviting them to partake in the hors d’oeuvres and while they are all making polite conversation, I’d dive into the waves and disappear beneath the moonlit depths. Sweet-talking aliens and a Cockney butler? I’d much rather deal with the sharks. I like them. 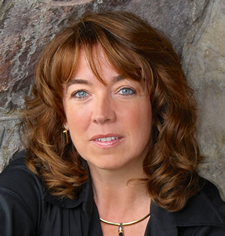 An FBI National Academy graduate, Micki Browning worked in municipal law enforcement for more than two decades, retiring as a division commander. Now a full-time writer, she won the 2015 Daphne du Maurier Award for Excellence and the Royal Palm Literary Award for her debut mystery, ADRIFT.

Micki also writes short stories and non-fiction. Her work has appeared in dive magazines, anthologies, mystery magazines and textbooks. She resides in Southern Florida with her partner in crime and a vast array of scuba equipment she uses for “research.”

To learn more about Micki, please visit her website.