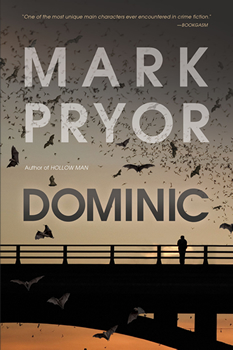 Every good thriller needs an intriguing protagonist. So it is with Dominic, the titular hero of Mark Pryor’s latest release. Dominic is a prosecutor, a musician, and an Englishman living in Texas. But banish any thoughts of an upright crime fighter, for Dominic is also a psychopath—and one that got away with murder in his first outing in Hollow Man. In DOMINIC, a smart homicide detective starts digging up that past murder, leaving Dominic no option but to come up with a carefully-orchestrated plan that has deadly consequences.

The result is an intriguing psychological thriller, with many twists, turns, and blind alleys to keep the reader guessing right to the very end. And despite Dominic’s psychopathy, the reader ultimately roots for him and wants him to succeed.

Pryor admits that creating an anti-hero was quite a challenge, especially since he ensured that the protagonist of his mystery series, Hugo Marston, is very much in the likeable category. But Pryor also admits that writing Dominic was so much fun. “I could really drop the shackles, as it were,” he says. “I knew from the get-go that Dominic wasn’t going to be likeable, so I had to find other ways for the reader to stay engaged with him. My focus, then, was making him interesting. Making him relatable, too, so the reader has empathy for what he’s going through. I hope, too, that there’s a certain amount of admiration for him—not his moral compass, of course, but his sense of humor and his intelligence.”

A lot of research was needed to really get under the skin of a psychopath and to make Dominic’s behavior credible. Pryor found a wealth of fascinating written material and he spent time talking with a psychologist whose job is diagnosing psychopaths. He also consulted with a female author who has written a book about being a sociopath. “For the record,” he adds, “I’ve learned that there’s essentially no difference between the two.”

His findings weren’t entirely expected. “I think the thing that’s surprised me most is knowing what empty vessels these people are,” he says. “Not inherently evil, as the movies would have you believe, but empty enough to suck the life out of someone if it suits their needs. They just don’t care about anyone but themselves, not even a little bit. I also think it’s fascinating that they go through life acting. They mimic emotions, pretend to be nice and kind and funny and compassionate. But it’s a façade designed to trick us, to help them get what they want. Terrifying, really.”

The result is that the well-crafted character of Dominic is indeed terrifying at times, which is part of the novel’s darkly humorous appeal. I wondered if creating such a believable character ever had people looking askance at Pryor. After all, as well as being a successful author, he has a demanding career as an assistant district attorney with the Travis County DA’s office. Dominic is a prosecutor in Austin. Dominic is also a British man living in the U.S., which again mirrors his own life experience. Pryor confirms that the superficial similarities between his life and Dominic’s means that he does have to remind people of the fact/fiction boundary from time to time.

Writers who love to dig deep into the psyche of their characters will smile at the fact that the reminders have also included Pryor’s wife. “When she first read Hollow Man, jokingly (I think!) she asked if she needed to worry about me,” he says. “So right then and there I took the Hare-PCL test, which is what psychologists use to diagnose psychopathy. It’s 20 questions, and you score 0, 1, or 2, and anything above 30 out of 40 means you’re a psychopath.”

And Pryor’s score?  “I scored 7. Yes, 7. To be honest, I was a little disappointed. I mean, as a prosecutor and a crime writer I’d hoped to have more edge than that! Ah well.”  Said with tongue firmly in cheek, of course, because Pryor really isn’t a Dominic. “The truth is, I cry at every one of those videos where soldiers are reunited with families, or dogs with their owners. Every. Single. One. And I think maybe that’s where my fascination with psychopaths comes from – they are so far from my natural state, I want to understand them more, see if I can create and recreate one.”

Although DOMINIC is the second book in Pryor’s Hollow Man series, he’s also written seven Hugo Marston mystery novels.  “After writing each Dominic novel, coming back to Hugo Marston and his friends in Paris has been a breath of divinely fresh air. A place of decency (despite the odd murder or two) and kindness. It may sound silly, but those characters are like old friends I get to spend time with once or twice a year (and in Paris!).”

“I have two more books in the Hugo Marston series to write (well, contracts for two, hopefully more after that). I’m about to head to Paris to research the new Hugo (I know, but I’m willing to suffer for my art…!), so that’s my focus for the next few months. And yes, I’m a very lucky man, I know that.”

And as for Dominic?  “I can’t help thinking maybe there should be one more,” he says. “A Dominic trilogy rings true in my mind and I think anyone who reads the books will agree with me that there’s one character who has some unfinished business with him. But we shall see.”

No spoilers, of course. But I can confirm there is indeed unfinished business. And Dominic, aided and abetted by Pryor, is just the man to bring things (and people) to an end. 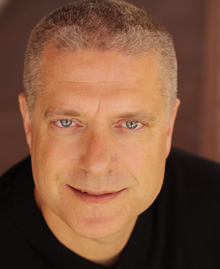 Mark Pryor is the author of Hollow Man (which introduced the protagonist Dominic) and the Hugo Marston novels: The Bookseller, The Crypt Thief, The Blood Promise, The Button Man, The Reluctant Matador, The Paris Librarian, and The Sorbonne Affair. He has also published the true-crime book As She Lay Sleeping. A native of Hertfordshire, England, he is an assistant district attorney in Austin, Texas, where he lives with his wife and three children.