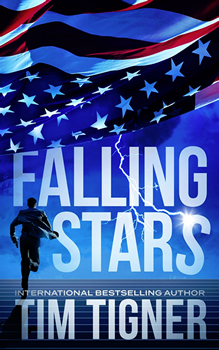 Imagine Bin Laden meets Bernie Madoff—and hold on for the ride. This is how Tim Tigner describes his latest novel, FALLING STARS.

While Kyle Achilles responds to a mysterious summons from the man who forced him out of the CIA, his former partner suffers an outlandish assault. More inventive than 9/11 and infinitely more lucrative, the attack on Jo Monfort kicks off a campaign destined to set the gold standard for clever crime.

Two distressed heroes. Three dastardly crimes. And the slickest heists of all time.

This month, Tigner took time from his schedule to answer a few questions for The Big Thrill.

Describe your start as a novelist.

I started writing my first thriller in 1996 from an apartment overlooking Moscow’s Gorky Park. I was running a major medical corporation’s Russian operations at the time—a great job—but feeling unfulfilled. That initial experiment convinced me I had potential as a novelist, but I only acted on it six years later. By then I was living in Brussels, running European operations for a blue chip corporation. My family physician wrote, “Change your job” on his prescription pad. That note led to quite an interesting discussion with my fiancée. We moved to Florida and lived off savings for the next five years while I wrote my first three novels.

In 2013, I self-published those three novels—Coercion, Betrayal, and Flash—after they spent six years collecting dust on my hard drive. I was working as the CEO of a Silicon Valley startup. If our technology had worked better in clinical trials, those novels would likely still exist only as electrons.

In 2014, the first novel, Coercion, was picked up by Thomas & Mercer, ten years after I wrote it. The validation gave me courage and confidence. I abandoned my business career to pursue my passion—for the second time in my life.

Where did the idea for FALLING STARS come from?

My book ideas all begin with a flash of insight. In the case of FALLING STARS, I was discussing drones with my brother. It occurred to me that if a drone were to maliciously lift someone into the sky, nothing could be done to save him—other than placating the person holding the remote control.

Tell us about Kyle Achilles.

Kyle Achilles was born to be series character. Saving the world is a tough profession.I wanted my hero to have a name universally familiar but not common. And I wanted a name that conveyed gravitas without arrogance. Something with depth of meaning. My natural tendency is to turn to the ancient Greeks for “classical guidance.” Achilles hit on all cylinders. He is literally the classic, flawed hero. I chose the name Kyle because it’s a common, solid, modern name—thereby adding balance—and it’s a great lyrical fit.

Devious devices are key to your work. How do you create these devices, in general and specifically for FALLING STARS?

I have a background rich in military and medical technology. I also spent years in Silicon Valley, working to develop and launch cutting-edge inventions. To that, I add a fiction writer’s imagination.

FALLING STARS has three devices. Two are evolved versions of existing products. With them, the creativity lies in their usage. The third device I invented out of necessity, the same way my villain did. Mechanically, “The Claw,” used by the drone to snare hostages, is a scaled up version of an endoscopic surgery device.

What research was necessary for FALLING STARS?

I create a Pinterest board for every Achilles novel. I use it both for my own reference and to make my research publicly available. For FALLING STARS that includes pins on drones, weapons, locations, medical conditions, and numerous other technologies. For technical questions that I can’t get answered online, I turn to fans. I do get out from behind my computer to research settings. I want to make the main locations in my novels an enjoyable part of the escapist experience—and fortunately I love to travel.

What is the significance of the title?

On the surface, FALLING STARS references a threat to America, the stars and stripes, and it literally describes a core element of the plot—celebrities dropping to their deaths. But like much in my novels, it holds deeper meaning. The villain explains that near the end of the novel, so I won’t give it away here.

You use grifting in several of your novels including FALLING STARS. Why?

I’ve always been fascinated by con men. At its essence, conning is outwitting. And since I try to write creative plots with clever characters, they’re a natural fit. What con men do is personal. One-on-one. Intimate. So there’s more drama, passion, and skill involved. Also, conning can be used for good as well as evil.

Ivan and his plan continue to surprise. What inspired the plan?

Ivan is billed as the world’s most clever criminal. The unraveling of his  plan forms the framework of the novel. Making each step a satisfying surprise was one of my primary goals. I put myself in Ivan’s shoes and looked at his situation the way any ruthless CEO would. How can I make the most money from the resources at my disposal–regardless of the cost to others? In Ivan’s case those answers, while sound and logical, are far from obvious.

What did you need to know to start writing FALLING STARS?

FALLING STARS is the first novel I began writing without a full, detailed outline. Since most of the characters were familiar and I had the core plot, I thought I could wing it. Big mistake. While I am very happy with the end result, getting there was frustratingly inefficient. It takes a lot of planning to get 100 logical and coherent twists in a 100,000-word novel, especially when the point of view changes every 1,000 words. I aim for a fast moving, unpredictable story told from both sides.

Ideally I write a fresh chapter or three every morning and rewrite the previous day’s work every afternoon. By the time I get to the end, I’m seventy percent of the way there. Then I do line editing while software reads the book back to me. After that it goes to beta readers. Dozens of them.

What do you want the readers to know about you or FALLING STARS?

My thrillers are not about murders or nukes in New York. They revolve around fresh ideas that engage readers intellectually while entertaining. The eBooks even contain links to videos and peer-reviewed publications that tie the futuristic-sounding fiction back to modern reality.

I got the dream call this year. The chairman of a major media organization called me out of the blue to ask if I’d like to collaborate on my next novel. So I’m currently distilling my file of fifty book ideas down to a few proposals for us to discuss. Pinch me. 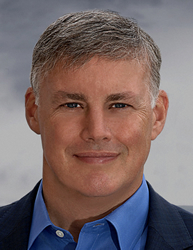 Tim writes fast-paced conspiracy thrillers with the tagline: Devious Devices, International Intrigue, and the Deadly Mistake of Messing with the Wrong Guy. His stand-alones include international bestsellers Coercion, Betrayal, and Flash. His recent focus had been on the Kyle Achilles series, which includes Pushing Brilliance, The Lies of Spies, and now FALLING STARS.

A Soviet Counterintelligence Specialist and Veteran of the Green Berets, Tim worked out of Moscow throughout perestroika, Brussels during the formation of the EU, and more recently Silicon Valley as a startup CEO.

Tim began writing thrillers in 1996 from an apartment overlooking Moscow’s Gorky Park. Twenty years later, the view from his desk is a vineyard in Northern California, where he lives with his wife Elena and their two daughters.

Tim earned a BA in Philosophy and Mathematics from Hanover College, and an MA and MBA from the University of Pennsylvania.

To learn more about Tim and to download one of his thrillers for free, please visit his website.