The Power of a Sharp Mind 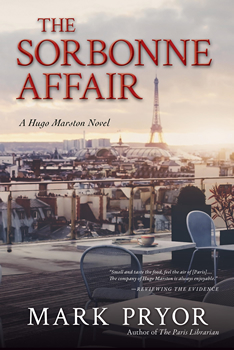 If you’ve had enough of explosions and are looking for an old-school sleuth who actually solves a complex mystery, then you’re ready for THE SORBONNE AFFAIR.

It starts when American author Helen Hancock finds a spy camera hidden in her room at the Sorbonne Hotel in Paris. When she notifies the U.S. Embassy, they send former FBI profiler Hugo Marston to investigate. But the surveillance issue quickly becomes a murder case.

Hugo Marston is not a hard-charging, kung-Fu fighting, race-car-driving kind of hero. But he is a highly interesting character.

“At a cocktail party, he’s not the man everyone gathers around as he spins wild tales of adventure,” Pryor says. “He’s the guy you end up talking to by chance, and then wish you’d known him for years. He’s a handsome man, but I always describe him as a watcher, not a player.”

Marston impresses with his powers of observation and his sharp mind, not his biceps and gun. He is in his element when the hotel employee who appears to be responsible for bugging Hancock’s suite is found dead. The next day, a video clip appears online showing the author naked with one of her writing students, deepening the mystery.

The story takes place in Paris and Pryor enjoys having his Texan protagonist working in a place that is very different from his home.

“I like the fish-out-of-water situation. It presents natural and repeated barriers to his investigations, which makes the books more interesting.  Also, Paris is my favorite city in the world. It’s walkable, it’s beautiful, and there are a thousand places to sit, drink coffee, and watch the world go by.”

Pryor has good reason to love Paris. He’s been there 15 times and his mother lives five hours away. So readers can likely expect Marston to return a few times. THE SORBONNE AFFAIR is seventh in the series, although when Pryor wrote the first, The Bookseller, he didn’t concern himself with the future or developing Marston as a series character. The big challenge for him is that all the major characters need to return.

“When a reader knows that, it’s difficult to put them in dangerous situations and also have a lot of suspense,” Pryor says. “If a reader knows for sure a character isn’t going to die then some of the thrill goes away. For that reason, I killed one of my main characters in one of the books so now my readers know that no one, except perhaps Hugo himself, is necessarily safe.”

No one appears safe in THE SORBONNE AFFAIR, as more bodies pile up and the list of suspects narrows. Everyone at the Sorbonne Hotel has something to hide, and no one is being fully honest with Marston. And a close call on the streets of Paris proves that he could be the killer’s next target.

While Pryor tells his brain-teasing mystery story in the usual way—chronologically—the subplot evolves differently. Pryor reveals why Marston left the FBI, but that story is told backwards! Far from being a literary stunt, there’s a good storytelling reason for this approach.

So if you’re ready for something a little different, settle into THE SORBONNE AFFAIR, an international mystery with a protagonist who is more Sherlock Holmes than James Bond.

Mark Pryor is the author of the Hugo Marston novels The Bookseller, The Crypt Thief, The Blood Promise, The Button Man, The Reluctant Matador, and The Paris Librarian, as well as the novels Hollow Man and Dominic. He has also published the true-crime book As She Lay Sleeping. A native of Hertfordshire, England, he is an assistant district attorney in Austin, Texas, where he lives with his wife and three children.