Between The Lines, Features, Latest Books
August 31, 2017
by Alex Segura
0

A Setting Most Deadly 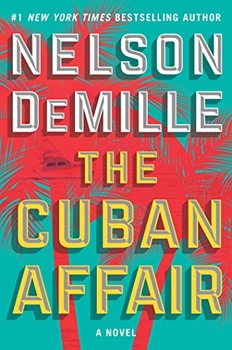 Some might think that an author of Nelson DeMille’s caliber, one who has consistently made bestseller lists and received worldwide acclaim for his thrillers, has little to prove. DeMille, the author of notable books like Plum Island and Night Fall, would disagree.

With his latest, THE CUBAN AFFAIR, DeMille cements his reputation as an author of compelling, finely crafted and at times, humorous standalone thrillers.THE CUBAN AFFAIR bursts with DeMille’s signature authenticity—a byproduct of DeMille’s passion for research—and introduces readers to Army combat vet “Mac” MacCormick, who, at 35, finds himself living the good life in Key West as a charter boat captain. When he and his charter boat are hired to participate in a Cuban fishing tournament on the communist island, Mac balks. But when the fee rises to $2 million, he finds it impossible to turn the offer down. Mac is soon entangled with an alluring Cuban-American woman named Sara Ortega and an older, enigmatic exile named Eduardo.

Mac and his newly formed crew discover the real reason for the trip: to uncover a $60 million bounty hidden somewhere in Cuba by Sara’s grandfather as he fled the Castro revolution. With relations between the U.S. and Cuba warming up, the clock is ticking before someone else finds the fortune. The predicament places Mac at a perilous fork in the road—survive and get rich, or die and disappear.

The idea forTHE CUBAN AFFAIR came to DeMille after a long stretch with a series protagonist, NYPD homicide cop John Corey, who first appeared in the author’s acclaimed Plum Island. Setting preceded character for the writer, but both pieces ended up fitting together seamlessly. That said, DeMille knew he’d have to make his combat vet hero younger, and tied to a different, more current war zone.

“It was really more of a throwback, because I started off doing standalones. I really went back to earlier books, which focused on Americans in dangerous situations,” DeMille said. “I had been doing the series character of John Corey for so long. I needed a new character. I had the premise: an action-adventure book set in Cuba, because Cuba was much in the news then in 2015 because of the so-called ‘Cuban Thaw.’ I knew it was going to be a first-person narrative and when you do that you need a very strong character that the reader is going to stay with. I came to the realization right away that a Vietnam War vet would not cut it [chuckle] because he would be in his 70s. I wanted to make this guy a war veteran, so obviously there was one war or the other. It could have been Iraq but I picked Afghanistan and made him 35 years old.”

Even with the so-called “Cuban Thaw” softening relations between the United States and its island neighbor, travel between the two nations, while easier, is still not automatic or painless. While some eager tourists await a chance to travel to Cuba, there remains a vocal and adamant group of critics and Cuban exiles who decry any weakening of sanctions against the Castro regime. This reality played a significant part in the writing and research for the book, DeMille explained, and in the creation of his female lead, Sara Ortega.

“It’s not at all paranoia,” DeMille said. “This is real stuff. Some Cubans just won’t go back. They hate the Castro regime so much that they say they’ll never set foot there again until they’re gone. And others can’t go back. And there are some who do venture back, and they’ve had problems. I try to make that clear in the book. My lead female, Sara Ortega, was publicly non-political, but privately she was anti-Castro. She could go back because she had nothing in her past that would come to the attention of Cuban authorities. She’s second or third generation Cuban-American, but she still has the animus towards the Castro regime a lot of young Cubans hold.”

A dedicated researcher, DeMille made a point to travel to Cuba to research the locale, as he’d done various times in different cities for his previous works, to soak up as much as he could about the country first-hand. These experiences helped him shape the novel as it was being written, and made for some interesting chatter among his fellow tourists.

“I was doing a lot of research as I went, which is what I usually do,” DeMille said. “I started the notes on the book before I went to Cuba. Once you do the research, it suggests plot points, and it even colors the characters to some extent. When I travel for research I don’t tell people I’m with that I’m setting a book there. I had to go to Havana with a group tour because individual travel is difficult. So, when I got to day three or four I had an interview with the American ambassador. I had to leave the group and I had to tell them why, and that got everybody interested.”

DeMille’s research had an effect on how he portrayed his characters, especially the Cuban-American, Sara Ortega, who has understandably conflicted views when it comes to Cuba, Castro, and how the island relates to the United States. In many ways, like most authoritarian countries, Cuba’s internal strife doesn’t stem from criminals trying to subvert or defy the rule of law, but by the rulers themselves being corrupt and tyrannical.

“Sara says in the book that the police state is not always apparent in Cuba, which is true,” DeMille said. “On the surface, it looks like any other Caribbean island. It’s falling apart, and that’s a mark of too many years of socialism. During my time in Cuba, there was a definite police presence. If we stayed with the group we felt safe, but you didn’t want to wander off at night. It wasn’t a dangerous place in terms of crime but it’s one of these places that, ironically, it’s not the criminal element that you need to fear.”

While crafting a novel so tied into current events makes for an interesting writing and research exercise, DeMille made sure to never lose focus on his primary objective: to tell an action-packed thriller that would leave the readers eager for more.

“You don’t want to make it a political book and you don’t want to be dogmatic,” DeMille said. “You’re trying to write an action story, and it has to be entertaining. Are readers entertained by politics or backroom maneuvering in their books? Not so much. [chuckles] But it was the layer that I wanted to put in. This wasn’t Barbados, it wasn’t Bermuda.”

While he enjoyed introducing readers to Mac and his supporting cast, DeMille is cagey when asked about a sequel to THE CUBAN AFFAIR.

“There could be a sequel there,” DeMille said. “But that’s not in the works right now. The real bottom line is what does the reader want? So many are saying, ‘Bring back John Corey,’ but my heart’s not in it right now. And then other people who are going to read this book are going to say, ‘We need to see Mac again, immediately.’ ”

The September 2017 Edition of The Big Thrill