The Wonder of a Magic Trick 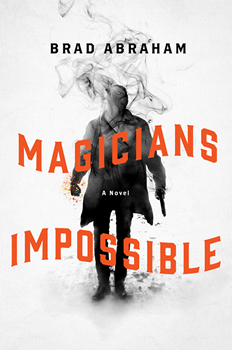 Most writers will tell you that ideas are a tricky science. Stories can come from anywhere: a dream, a random photo, a snippet of overheard conversation—or, in the case of Brad Abraham’s debut novel, MAGICIANS IMPOSSIBLE, a happy malapropism that would eventually lead to a book deal and a superstar literary agent.

“It began as a bit of mangled syntax,” Abraham says. “I was trying to say Mission: Impossible, and ‘Mission’ came out as ‘Magicians.’ The person I was having a conversation with said, ‘Somebody should write that movie—magicians who are spies.’ I thought, maybe I’ll see what’s there.”

Abraham—whose writing credits include the 2010 SyFy movie Stonehenge Apocalypse, a comic book series called Mixtape, and a lengthy stint as a film journalist for the horror magazine Rue Morgue—decided the concept was better served as a novel than a screenplay, but the manuscript he produced had little in common with the version of MAGICIANS IMPOSSIBLE that’s hitting shelves this month from St. Martin’s Press. While the book that made it to print is a contemporary urban fantasy that centers on a war between secret cabals of warlocks and witches, Abraham’s original take was a historical thriller with no supernatural elements, loosely inspired by reports that Harry Houdini had worked for the Secret Service during World War I.

After working his way through a couple of drafts, Abraham submitted the novel to an editor he knew at St. Martin’s. It was well received, but didn’t generate enough enthusiasm to lead to a book deal. He moved on to other projects, and the manuscript collected dust until April of 2014, when the editor invited Abraham to lunch and asked if he’d be up for reworking the story into a “Harry Potter-meets-James-Bond-type thing”— a contemporary thriller with a supernatural angle. Abraham accepted the challenge, but rather than simply changing the setting and adding liberal doses of fantasy, he decided to retool the story from the ground up.

“I landed on something I thought would be fun, and a little atypical of what you would normally get in this kind of thing,” he explains. “When they said ‘Harry Potter meets James Bond,’ I thought, well, it can’t be a little kid running around as a spy; it’s gotta be somebody in their 20s or 30s. So what are the mechanics of that? What if Harry never got his Hogwarts letter and he just went on with his own life with his awful aunt and uncle, and then around the time he’s 30, he finally discovers the truth about who his parents were and who he is? And now he really needs to get in the game and start mastering these skills, because people are after him and he has to defend himself. That became the whole thrust of the story.”

The protagonist in question is Jason Bishop, a good-natured but aimless bartender whose life is thrown off-kilter with the news that his estranged father, who recently leapt to his death from a New York skyscraper, was part of a secret organization of magic-wielding spies known collectively as the Invisible Hand. When Jason proves to be a gifted mage in his own right, he’s swept up in a war between his dad’s employers and the Golden Dawn, a rival group of warlocks and witches that had a hand in the elder Bishop’s death—and in the death of Jason’s mother many years before. As Jason learns to navigate the bizarre underworld of magic and secret societies, he quickly finds that he can’t trust his most basic assumptions about the people who are closest to him, and the world he thinks he knows—or, for that matter, his own eyes and ears.

“I knew I wanted the book to have the structure of a magic trick,” Abraham says. “When you think of a magic trick, it’s like, ‘I’m going to make this elephant disappear,’ and you’re leaning forward, thinking, okay, how’s he going to do it? Is he going to do it? And you’re looking for where the smoke and mirrors come in. I wanted to adopt that same structure. I wanted it to play out for Jason, and for the reader, that you’re going along at a certain speed, being fed certain bits of information. You’re assuming this is the story, and then when the big midpoint crisis happens, it’s revealed that, wait a minute—there’s this whole other thing going on in the background that you weren’t aware of, but the clues were there.” 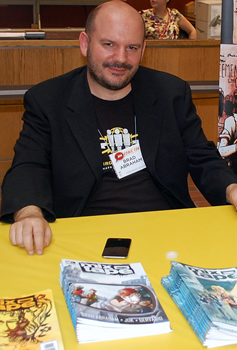 Abraham credits his background as a screenwriter with helping him maintain the ambitious balancing act of reveals and reversals that keep his plot hurtling forward.

“I think it was William Goldman who said that a screenplay is structure, period,” he says. “When I started writing the book, I knew I needed to have a certain structure in place, because I knew I was constructing a puzzle-box story. The book is written like a stage performance, and I had to know what was going on and where I was going.”

That discipline paid off, and the good news came in the form of an email Abraham received around Halloween of 2014: MAGICIANS IMPOSSIBLE had been formally accepted by the publisher and it was time to move to contract negotiations, if Abraham would kindly put them in touch with his agent. The problem? He didn’t have one. What he did have, though, was someone who could help him streamline the daunting process of finding representation: a wife who’s a book publicist.

“She said, ‘Here’s my Rolodex, here are the agents, go through it,’ ” Abraham recalls. “She had Jodi Reamer’s card and I did my research, plus I knew Writers House by reputation. Jodi reps John Green and Stephenie Meyer and Ransom Riggs, so I thought, well, there’s no way in hell she’s going to be interested in me, so obviously I’m going to submit it to her first so she can go ahead and reject me. I emailed her out of the blue and gave her the backstory. She got back to me right away and told me to send her the chapters and outline. About a day later she emailed me and said, ‘Is there a number I can reach you at?’ She called me, told me she loved what I’d sent, asked a bunch of questions, and said, ‘Well, if you’re looking for an agent, I’d love to represent you.’ ”

With the book slated for release on September 12, Abraham is looking ahead to other projects. He’s gearing up to script an unrelated TV pilot soon, and he’s hard at work on his next book: a horror novel he describes as “The Breakfast Club meets Invasion of the Body Snatchers.” He says he’d be up for revisiting the world of MAGICIANS IMPOSSIBLE if the book strikes a chord with readers, but for now, Abraham—a horror fan ever since his father rented Alien on VHS and convinced him to sit through it—is eager to explore the genre that gave him some of his first published bylines.

“I want to do the type of story I grew up reading and loving, and I want to set it amongst characters who are in the same age group as I was when I was discovering Stephen King and Clive Barker and Peter Straub and Anne Rice,” he says. “I want to pay homage to where I came from, in a way, and lay claim to my fandom. I also want to write a book that Rue Morgue will cover [laughs]. They’re my people, and it feels weird that, for all my love of horror and my association with the genre through Rue Morgue and other magazines, I’ve never done what can completely be called a horror story.”