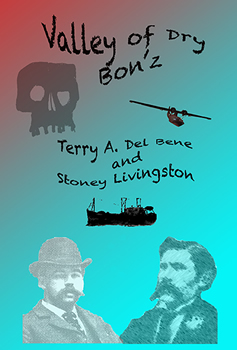 The writing team of Del Bene and Livingston has produced another thrilling installment in the Joyce Smith series with VALLEY OF DRY BON’Z.

This latest installment sees the return of You Know Who, a serial killer that Native American Undersheriff Joyce Smith and her investigative team thought they had killed, not once but twice before. But when a series of attacks against those who helped the team unfold right before the holidays, and a team member is kidnapped from his guarded hospital room, the team gathers to examine all avenues, including those previously explored to try to get at least one step ahead of the nefarious You Know Who and rescue their friend. Not only is the weather against them, but they also have to navigate roadblocks and assaults created by mercenaries and the federal government to a final showdown.

The authors have taken a cast of characters and melded them into a tight-knit team with strengths and weaknesses and a genuine concern for each other. This team approach is unusual in the thriller genre and works well in the series. Del Bene and Livingston manage to give each team member some moments in the spotlight while furthering the story line.

VALLEY OF DRY BON’Z, the third installment in the series, incorporates a number of themes and elements that can also be found in ’Dem Bon’z and ’Dem Dry Bon’z. Key in the series is the information concerning serial killers. As Del Bene said, “An undercurrent in our stories is what makes people become evil. We can’t answer that but we employ the all-too-frequent cases of real horror in history to illustrate commonalities in murders. In the early drafts we suggested fictional links between H. H. Holmes, Jack the Ripper, and the Midnight Assassin only to find in our researches speculation from crime writers and police that here may have been actual links.

“In our fictional world there is a demonic entity traveling the globe and populating it with serial killers who have similar genetic makeup, creating a giant family of murderers. It would be frightening if there was any truth to something like that. But then truth is stranger than fiction.”

The authors have amassed an entire floor-to-ceiling bookshelf of works on serial killers, cultures represented in the books, demonology, satanic cults, and criminology. “VALLEY OF DRY BON’Z required additional work on geography, navigation, and place names in the Northwest Coast and Aleutians. Terry spends a lot of time finding local stories about the places in the book and tracking down some of the lesser-known serial killings in the West. In each of the books we try to expand the story to real places and weave the geography and local color into the tale.”

According to Del Bene, the idea for the Bon’z series came while he was living in Bismarck, North Dakota. Several amputated limbs were discovered during the construction of a parking lot. The limbs appeared to be from the nineteenth century. The parcel of land was owned by a doctor during that time and it was speculated he was operating outside his legal practice. This inspired a tale about a serial killer surgeon working in America’s outback.

The authors also draw on their own experience to add detail and flavor to the stories. “We both put a lot of our personal knowledge sets into each story. Stoney is great with local geography, weapons, and all those wonderful vehicles that populate the novel. (Stoney is the car collector and Terry always had boringly efficient vehicles.) Stoney’s driven so much of America’s back roads that he can describe the most obscure localities to a tee. He also knows the job of a private investigator, such as the one another of our main characters, Jim Lowell, holds. Police procedures and bounty hunting figure prominently in our books.” Terry’s experiences in living in areas featured in the books are woven into the tales, as he has walked much of the roadless parts of the American West. Terry also brings knowledge of history, cultures, and forensics to the duo.

According to Del Bene, the writing team came together as a result of a writers’ conference where the two met. From that meeting, the pair developed a friendship, and at some point Del Bene suggested they try writing a novel together.

“I sent Stoney a very sketchy idea and recommended some characters. Stoney added to this and he agreed we could go forward. We both had experience with working with other authors and we fell into a discipline of one author having the ball for a stint and then handing it off. We were passing chapters back and forth, sometimes on a daily basis. When life got in the way of progress, we waited for the storms to pass. We always kept moving forward once the book was started.

“We each bring different backgrounds to the mix. We each defer to the other in matters of individual expertise. We are working roughly one or two thousand miles apart at any given time. That means we are in almost constant communication via Internet and telephone just about every day. We both agreed to check our egos at the door and focus on the good of the story. Yet, we constantly were dishing up little surprises in the middle of the story. Those little twists and turns give the tale some of its character, and made the writing a genuine pleasure.”

With a note of amazement, Del Bene adds that “we both edit the heck out of each other’s work. By the time the book is finished we can hardly tell, or even remember, who wrote which passages. We have worked very hard developing a variety of interesting characters who the reader can connect with. We’ve both been blessed with lives filled with such people, so it was like visiting with old acquaintances for us.”

The pair has taken a hiatus from the Bon’z series to complete a novel set in Arizona. That said, under the deft handling of this writing team, it does seem likely You Know Who will return before too long.

More information about Terry A. Del Bene, Stoney Livingston, and their books can be found at their website here.