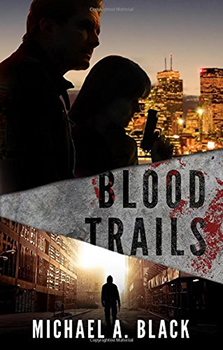 Detective Roger Colby thought he’d ended serial killer Morgan Laird’s murderous spree twenty-eight years ago, when Laird was relegated to a wheelchair along with a life sentence. But now the convicted killer is out on parole. Suddenly, a new series of murders start popping up, each mimicking one of the crime scenes of Laird’s original killings. As Colby reluctantly joins a federal task force investigating these new crimes, he begins to uncover a new and sinister plot so unthinkable that it’s virtually beyond belief. When Laird’s DNA is recovered from one of the crime scenes, Colby realizes that the unthinkable has suddenly become reality. Shunned by the task force, and without support, he must trace this new blood trail to its source and bring these new and brutal crimes to a stop, regardless of the consequences.

The Big Thrill had the opportunity to discuss with Michael A. Black his latest thriller, BLOOD TRAILS:

I hope they take away a sense of having read a good thriller.

BLOOD TRAILS is a non-stop thriller that will keep readers on the proverbial edge of their seats. Not only is it a page-turner, but it’s also on the cutting edge of tomorrow. Think of a Michael Connelly police procedural merged with the prescient vision of Michael Crichton, and you’ll have an idea what to expect from BLOOD TRAILS.

I did quite a bit or research for this one, including gaining information from a variety of sources including Canadian and United States law enforcement authorities.

I personally scouted out the locations featured in BLOOD TRAILS, including a trip to Toronto, as well as walking through an abandoned oil refinery around midnight. Of course, I carried my gun with me the whole time, even though Colby loses his in the story.

Many writers have influenced me during my writing career, but perhaps none so much as the late John D. MacDonald. He was a real writer’s writer, and always turned in a quality manuscript. He was the consummate professional, and was published in a wide variety of genres (mystery, sci-fi, thriller, to name a few). His Travis McGee series is perhaps the finest series of novels written by an American author. There have been others, too. Michael Crichton, Elmore Leonard, Stuart Kaminsky, Robert B. Parker are a few who are no longer with us. Many more of my mentors are still with us, but I’ll not name any more due to space considerations.

Michael A. Black is the author of 28 books, the majority of which are in the mystery and thriller genres, although he has written in sci-fi, western, horror, and sports genres as well. A retired police officer with more than 30 years’ experience, he has done everything from patrol to investigating homicides to conducting numerous S.W.A.T. operations. He is also the author of more than 100 short stories and articles, and has written two novels with television star, Richard Belzer (Law & Order SVU). Black is currently writing the Executioner series under the name Don Pendleton. His latest novel is BLOOD TRAILS.

To learn more about Michael A. Black, please visit his website.

The Last Girl by Danny Lopez