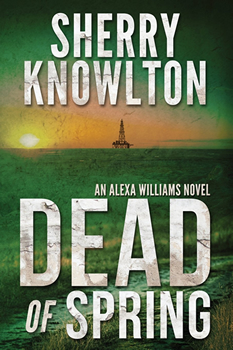 Sherry Knowlton, author of the Alexa Williams suspense novels, was born and raised in small-town Pennsylvania, where she developed a lifelong passion for books. Like so many authors, she was the kid who snuck a flashlight to bed at night so she could read beneath the covers.

Knowlton’s interest in the written word never faded. Her novels focus on contemporary issues and DEAD OF SPRING, her new release, is no exception. An environmental crisis is at the heart of this latest story, which deals with fracking and government corruption.  As the current crisis unravels, a parallel historical story tracks the 1979 Three Mile Island nuclear incident.

In researching her novel, Knowlton drew on her personal experience living in Pennsylvania during the Three Mile Island episode. Written material on the Internet, state regulations, news clips, and interviews of experts provided additional background material. Knowlton said, “One of my most useful bits of research came when I visited a landowner in northern Pennsylvania who had leased his land to an energy company for fracking.  He leased in the early days of fracking in Pennsylvania and was unaware of the problems he might encounter.”  This man shared his experience, showing the process that transformed his property from a beautiful woodland into an acre of gravel and machinery.  Pristine drinking water now requires constant filtering for showers and bathing, and his life is a constant battle with the energy company for compensation.

Knowlton’s years working with state and federal governments, as well as a subsequent career in the health insurance industry, provided an in-depth understanding of how a bill becomes a law.  She’d had a front row seat to the battles over fracking taxes and legislation in the Keystone State.  Knowlton is quick to point out DEAD OF SPRING is pure fiction and the novel embodies a somewhat cynical view of government.  She’s a big fan of effective government.  “I’ve seen the many excellent people throughout government—in all branches—who are smart, dedicated, and committed to making citizens’ lives better.  I have to admit that, at the federal level and many states, the country seems to be going through a really rough patch in both effectiveness and philosophy of government.  I hope we come through it unscathed.”

As for themes, there isn’t a Game of Thrones–type story arc driving the series from book to book, but Alexa Williams and her dog, friends, and family evolve through the course of the series.  The theme that permeates Knowlton’s stories, however, is the existence of evil. “Not the Biblical fire-and-brimstone type of evil, but the banal and destructive evil that often hides in familiar people and ideas.  Domestic violence, sex trafficking, casual corruption, murder—all are often committed by someone that family, friends, or neighbors say, ‘He (or she) was such a nice person.  I can’t believe they would do that.’ ”

All the books in the series focus on both an action/thriller external plot and a more fundamental human issue. These topics have been described as women’s issues, but ultimately they’re human issues. Knowlton says her goal is to write a story that will have people on the edge of their seats, dealing with substantive issues in addition to the suspense plot. These current issues add depth to her stories and draw the reader into the plot. She admits that she’s “aiming for a little stealth education about topics that are near and dear to my heart.  As an active environmentalist for most of my life, I’d like people to know more about the human and environmental effects of fracking (DEAD OF SPRING’s issue).” As for her other stories, the topic of sex trafficking arrises in Dead of Summer, and religious extremism, domestic violence, and reproductive rights for women are woven into the plot of Dead of Autumn. All of these are complex issues that affect many people on a daily basis.

When asked about what’s next on her agenda, Knowlton mentioned that a new Alexa Williams novel, Dead of Winter, is already in the works. 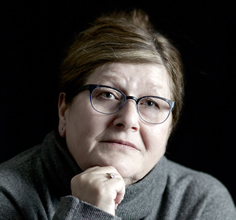 Sherry Knowlton, author of the Alexa Williams suspense novels, Dead of Autumn, Dead of Summer and Dead of Spring (release April 22, 2017) was born and raised in small-town Pennsylvania where she developed a lifelong passion for books. She was that kid who would sneak a flashlight to bed at night so she could read beneath the covers. All the local librarians knew her by name.

Sherry spent much of her early career in state government, working primarily with social and human services programs, including services for abused children, rape crisis, domestic violence, and family planning. In the 1990s, she served as the Deputy Secretary for Medical Assistance in the Commonwealth of Pennsylvania. The latter part of Sherry’s career has focused on the field of Medicaid managed care. Now retired from executive positions in the health insurance industry, Sherry runs her own health care consulting business. She is also “rewriting retirement” by turning her passion for writing into a new career.  She draws on her professional background and travel experiences as inspiration for her novels.  She also uses her writing as a platform to shed light on social issues affecting our world today.

Sherry and her husband, Mike, began their journey together in the days of peace and music when they traversed the country in a hippie van. Running out of money several months into the trip, Sherry waitressed the night shift at a cowboy hangout in Jackson Hole, Wyoming and Mike washed dishes in a bakery. Undeterred, they embraced the travel experience and continue to explore far-flung places around the globe.
Sherry lives in the mountains of South Central Pennsylvania, where her novels are set.