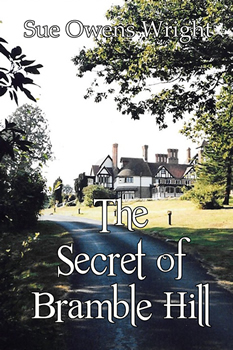 The West Coast in the year 2017 may seem a long way from the English countryside of 1946, but in THE SECRET OF BRAMBLE HILL, California-based mystery author Sue Owens Wright has authored a classic English cozy right down to the tea, crumpets, and drafty manor house.

There are dark secrets best swept under his lordship’s rug, and perhaps a ghost lurking in the forgotten rooms of Bramble Hill.

There is also a dog, Gemma, who steals a scene or two. This makes sense, considering that Wright is best known for a slew (or is that a pack?) of mysteries featuring a basset hound.

Wright is a true dog lover and is active in pet welfare organizations in California. Her Beanie & Cruiser basset hound mysteries include Howling Bloody Murder, Sirius About Murder, Embarking On Murder and Braced For Murder. (The term “braced” has to do with a team of basset hounds working a trail together.) Her nonfiction books include several titles for dog owners (150 Activities for Bored Dogs) and she also writes for magazines for pet owners. She has been nominated 11 times for the Maxwell, awarded by the Dog Writers Association of America.

The Beanie & Cruiser novels feature Elise “Beanie” MacBean, a reporter for the Lake Tahoe Tattler newspaper. Her boyfriend is the local sheriff, which is helpful if one is solving crimes. It’s her basset hound, Cruiser, who is the real sidekick and star of the story.

Writing an English mystery might seem a world away, but Wright had just the background to tell that story.

“I traveled a lot in England,” explained Wright, whose husband, Keith, has family in Manchester. Several details in the novel, including a cow blocking a country road and the wind singing in a cliff- side fence, come from those travels.

There is a supernatural element hovering in the background of Wright’s new novel. She won’t admit to having seen any ghosts herself, but that doesn’t mean she isn’t open to the possibility, especially considering the historical surroundings of the English countryside. “Some of the places go back hundreds of years,” she said. “Sometimes you just get this feeling when you go into these places. England has so much history!”

The book itself grew out of Wright’s first efforts at becoming a published author. “I was dreaming of being a writer at the time,” she said. “It kind of got put aside for a long time.”

Dusted off and rewritten many times, the novel has finally made it into print.

Wright’s journey to becoming a writer, one which began with this novel, has been “a real learning process,” as she put it.

“I write something every day,” she said, mainly working for a few hours in one of her beloved Peet’s coffee shops. “Sometimes you’ll see a character walk right in the door.”

She often tunes out the hubbub of a coffee shop by listening to music as she works. With the earbuds in, she is usually listening to the Irish band, Clannad. “Their music fit so well with what I was imagining in the story,” she said. Wright has become a musician herself, playing the harp, which she finds very calming.

The coffee shops are a good distraction from the dogs at home, allowing her time to focus on her writing. She tends to journal first, getting ideas going, then moves to writing on her laptop. She does not follow a strict outline, but has an idea of where she wants the story to go. It’s a bit like a drive through the English countryside.

“It just kind of evolves,” she said.

Considering that a book typically takes here two or three years to write, it needs to be a topic that she really loves. The English novel is a standalone, but she said that writing a series can be challenging in that a writer is always attempting to go beyond her last book and evolve the characters with an even better story. “You really have to love it.”

“Believe in your dream. Don’t ever give up. Persistence and patience pays off.” Healthy doses of caffeine also seem to help.

With THE SECRET OF BRAMBLE HILL in bookstores, Wright’s next writing project will be to return to her beloved basset hound and her successful mystery series. Look for Ears for Murder sometime soon. 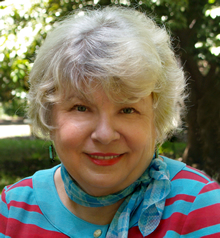 Sue Owens Wright is an award-winning author of fiction and nonfiction. She is an eleven-time finalist for the Maxwell, awarded annually by the Dog Writers Association of America (DWAA) to the best writer on the subject of dogs. She has twice won the Maxwell Award and earned special recognition from the Humane Society of the United States for her writing. She writes the acclaimed Beanie and Cruiser Mystery Series, including Howling Bloody Murder, Sirius About Murder, Embarking On Murder and Braced For Murder, which is recommended on the American Kennel Club’s list of Best Dog Books. Her newest novels are The Secret of Bramble Hill and Ears For Murder, the next mystery in the Beanie and Cruiser series. Her nonfiction books include What’s Your Dog’s IQ?, 150 Activities for Bored Dogs, and People’s Guide to Pets. She has been published in numerous magazines, including Dog Fancy, Mystery Scene, AKC GAZETTE, Fido Friendly, The Bark, and Animal Fair. Her work also appears in several anthologies, including PEN Oakland’s “Fightin’ Words,” along with Norman Mailer and other literary notables.