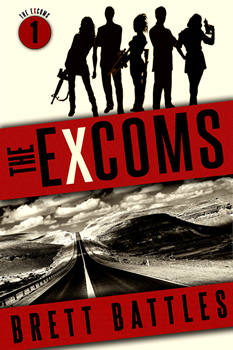 Award-winning author Brett Battles is at it again. With several series under his belt, Battles is giving fans a spin-off from his highly successful Jonathan Quinn series with THE EXCOMS.

In THE EXCOMS we are reintroduced to Ananke, who debuted as an assassin in The Buried, and those who become her team: Rosario the obtainer, Dylan the courier, Liesel the bodyguard, and Ricky, the pain-in-the-ass/hunter. The five find themselves “saved” by a mysterious organization called the Committee. The Committee needs their help and expertise in solving a problem. In return, the Committee promises to reverse their excommunication from the secret world they inhabit.

Of course, nothing good ever comes without strings attached.

According to Battles, “THE EXCOMS brings together a set of fun, diverse characters who together are much greater—and better—than they are as individuals.” He goes on to say, “I loved how the relationships between the five (well, six, if you count Shinji) developed as I wrote the story.”

Battles knew that if he ever did a spin-off from his Quinn series, it would feature Ananke. “I knew she was someone special from the moment she made her initial appearance.” He wasn’t sure where the scene was going, but he knew he needed someone to carry out a quiet assassination. Ananke grew from that.  “She took over the page. She’s smart, talented, and not above making a few bad decisions, Ricky being one.

“I started thinking she’d be great in her own series, but then had an idea to bring together a team, and then thought I would make her the leader of the team. So basically THE EXCOMS grew organically.”

As for Ananke’s unusual name, Battles said he wanted his assassin to have a “cool name.” So he “did a little research and discovered one of the ancient Greek gods was a woman named Ananke, who, in a nutshell, was the dictator of fate and circumstance. That sounded perfect for an assassin to me.

“When it came to the team, I knew I wanted them to be international in make up. After that they came into existence much like Ananke did.” He finds his characters often come to life and grow as they appear word-by-word on the screen. Battles said, “I began writing each of their backstories without knowing where things were going to go, so I learned about them as I wrote them.”

As the backstories grow, Battles finds the characters become more fully developed in his mind. He admits a great deal of what he knows about his characters might never make it onto the page, but “the more I write about them, the more I know how they’ll react in different situations.”

Rewriting is a big deal for Battles and something he has come to enjoy. He admits when he first started out he hated rewriting. “I wanted everyone to love my work as was, with me doing no more than a quick look for errors.” But it was his mentor, the late Bill Relling, who taught him the power of rewriting. “Realizing this gave me permission to just write and not worry about being perfect.”

His first draft becomes his outline. “It’s often a horrid mess,” he said, “with changes to things in the second half that I haven’t addressed in the first and so many plot holes you could lose yourself in any of them and not find your way back out.”

Fortunately for readers, by the end, Battles knows the story. “Then it’s all about re-crafting what I’ve written into a readable book. A process that’s exhausting, infuriating, and exhilarating.”

If the debut of THE EXCOMS is any indication, Battles will have his hands full in the upcoming adventures. Several members of the Excoms are in The Aggrieved, the next installment of the Quinn series due in May. Next in the Excom series, readers can look forward to the team conducting their own investigation into the mysterious Committee.

The wait should not be too long. With thirty published novels, Battles averages three to four novels per year in a combination of standalones and series. To learn more about Brett Battles and his work, including his Barry Award–winning Quinn series, check out his website. 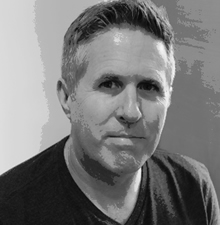 Brett Battles is a Barry Award-winning author of over thirty novels, including the Jonathan Quinn series, the Project Eden series, and the time bending Rewinder series. He’s also the coauthor, with Robert Gregory Browne, of the Alexandra Poe series. He lives and writes in Los Angeles.

To learn more about Brett, please visit his website.