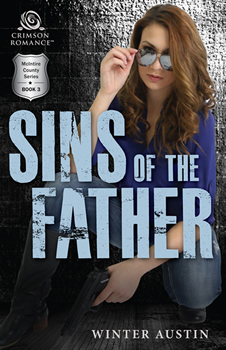 Winter Austin has translated her ability to verbally spin a vivid and detailed story into writing deadly romantic thrillers. SINS OF THE FATHER spotlights newly pinned deputy Jolie Murdoch, whose first big job as a McIntire County deputy is to locate a missing girl. What Jolie doesn’t expect is to stumble upon a corpse—the girl’s father—with a prime suspect hanging around the crime scene. But why would local bartender Xavier Hartmann go off the deep end and bludgeon a man to death? A former Marine, barely coping with a traumatic brain injury, Xavier has no memory of what happened at the crime scene.

Will Jolie do her sworn duty or buck the status quo to give her and Xavier’s newfound passion a chance?

SINS OF THE FATHER is the third book in the McIntire County series. What can you tell The Big Thrill readers about the series and how your characters have evolved?

I started the series out with one book, not knowing for certain if it would become a series. When secondary characters came onto the page, sort of creating their own stories in the process, it was a foregone conclusion to continue. PTSD in its many forms seems to be the driving factor behind the books, but it’s mostly the murder plots and how the characters react to them. And as in SINS OF THE FATHER, how the villain has a personal connection to the main character.

At their core, the books in the McIntire County series are romances. I’m not an “insta-love” kind of writer. The relationship with Jolie Murdoch and Xavier Hartmann in this book was slower yet, because they barely know each other, and well, Xavier’s being looked at as a suspect. A huge conflict of interest there for Deputy Murdoch.

I noticed the continuity for the novels is the town and county rather than a continuing character. Is there a reason you decided on this approach? Do you think it helps keep the series “fresh”?

My first series had continuity in the way it followed the same main characters. When I started McIntire County, I wanted a change, and since I write in the romantic thriller/suspense genre, readers prefer to have new main characters with each new book. Try as I might to make each a stand-alone, previous characters and plots carry over into each novel.

As to fresh, yes. Each of the new murder plots has demanded a new set of characters to cope with and solve it. And because it’s a romance, I like to see a new relationship develop. I do my best to have cameo appearances from previous characters. As a reader myself, I loved seeing where earlier characters were in their lives, and I want to keep my readers appraised of their favorites, too.

You’ve mentioned that you love everything rural, agricultural, and military. Where does this love come from? Personal experience, friends, family?

Personal experience. I grew up in a farming community, the child of a farmer, and I married a child of a farmer. Before my husband finally followed his true love as an agricultural teacher, he was in the military for twenty years. So, I’m steeped in my loves. Though I don’t make no bones about falling in love with New Orleans and the culture of Louisiana, either.

SINS OF THE FATHER centers around traumatic brain injury, a condition that along with PTSD affects too many of our veterans. How did you research the issue?

The concept came from a National Geographic article I was reading in my doctor’s office one day. The article centered on military veterans who suffered from TBI, its impact on their lives, their families’ lives, and how they struggled to prove that this condition was real. Despite any outward appearances, TBI can be deceptive.  You can’t always see signs of the damage. This led to online searches for more articles.  One I gleaned a lot from was written for John Hopkins medical magazine.

All of this made me realize just how fragile our brains are, and how easy it is to suffer a concussion—a precursor that leads to many TBI incidents. When the movie Concussion came out, I watched it, and it gave me a gut check. What all the articles and this movie touched on is scary. But it made the plausibility of the blackout and the inability for my hero to remember what happened a reality, which cranked up the suspense.

How deeply do you want to want to delve into the psychological aspects of the story—everyone has a sin they try to hide?

I don’t know if I went really deep, but I brought it to the forefront. I’ve found in fiction as in real life, people who’ve done wrong will do everything in their power to hide it, whether they’re driven by guilt, greed, lust, or just pure evil. No matter how hard you try to hide it or bury it in the dark, someone will uncover it, and you can guarantee all hell will break loose.

Oddly enough, I’ve had some flack over the fact that people in small towns and rural areas can’t possibly act like I’ve portrayed in the books. I laugh, and shake my head. Believe me, I’ve lived it, I know it, and it does happen. To be honest, those who create the most problems for others are the very people who have the most to hide, because God forbid their sins become the topic of conversation. And as twisted as it may sound, karma has her hand in the turnabout.

I noticed you stated that SINS OF THE FATHER had a different voice. What do you mean by that?

My writing style has changed, matured. I’ve been publishing for going on five years and I’m finding I don’t write the way I used to. In fact I pulled up my earlier books to make sure I wasn’t repeating something in a new project idea, and I was shocked at the differences. It’s also possible that because I’m writing about an area I’m familiar with it helps to pull out the nuances and intricate details that are lost when you’re trying to write about an area you’re not familiar with.

It also helps when you have a fantastic editor who knows how to pull out of you the best that’s in you. I’ve learned tons from the editing process because I have an editor who never quits learning the ebbs and flows of the writing process.

I’m in the middle of trying to decide on that. I do have another book started on the McIntire County series, but there’s a new story battering at the defenses. I’m still in the midst of researching and developing it, and at this point, I don’t have much to go on. Rest assured that anything I write will have my brand of police procedural/suspense/mystery/romance with military and police characters. 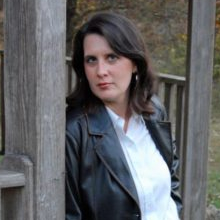 Winter Austin perpetually answers the question: “were you born in the winter?” with a flat “nope.” Having recently changed her address back near her hometown, Winter has stepped into the chaotic world of a full-time wife, mom, author, and employee. With her ability to verbally spin a vivid and detailed story, Winter has translated that into writing deadly romantic thrillers. Combining her love of all things rural, agricultural, and military, she’s turned her small town life upside down.

To learn more about Winter, please visit her website.