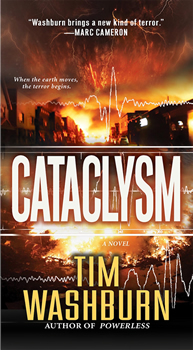 Not everyone may be aware that there is more to the magnificent Yellowstone National Park than meets the eye. For the park, all 1,500 square miles of it, is actually a supervolcano that last erupted over 640,000 years ago.  Not to get anybody concerned or anything, but that monster is still active and may erupt again.  In Tim Washburn’s CATACLYSM, it does.

In this fast-paced read, park scientist Tucker Mayfield is trying to not only get the park visitors to safety but his own family, too. His is just one thread in the classic disaster format used by Washburn:  multiple points of view and story lines, cuts between locations so we get different perspectives on the unfolding mayhem, and hugely exciting set pieces.

Washburn says he actually wasn’t a big fan of the disaster genre until he started writing it in a complete departure from his previous style. Powerless was the one that got him a publishing contract.  “Powerless deals with a solar storm slamming into Earth and scientists say it’s only a matter of when, not if, that happens. We are woefully unprepared for such an event and are making little progress in improving our electrical grids.”

Disaster is where it’s at for him now. “It’s fun finding gruesome ways to destroy parts of the world! The key, though, is the concept must have a grain of truth to it.  In CATACLYSM, the Yellowstone caldera is real and could erupt someday. The caldera lurks beneath the surface, unlike most volcanoes people visualize in their minds. Basically, it’s hidden in plain sight and that’s what fuels all of Yellowstone’s hydrothermal features. Scientists didn’t know the volcano was there until the early 1970’s.  The Yellowstone caldera has erupted three previous times, and all three make the top 10 for the largest volcanic eruptions on earth.”

As every writer knows, grains of truth involve a lot of research to make them plausible.  “I try to be as precise as possible,” says Washburn. “For this novel, I had to learn about volcanoes, seismometers, tiltgauges, strainmeters, and on and on…even the flight of an aircraft and how satellites are used for remote sensing.  It’s a fine line on how much of that material to use. You have to remember you’re writing for entertainment not to instill knowledge, although I hope the reader does gain an understanding of how things work. The research is fun for me.” But there are some things at which Washburn draws the line. “I haven’t visited an active volcanic eruption, but did spend some time watching video of eruptions. Truth is, I have no desire––too damn dangerous.”

That research most definitely paid off. The depictions of the eruptions and the many types of volcanic activity are very vivid. Washburn succeeds in scaring the reader (well, certainly this one) and he’s also a bit unsettled by what he’s found. “What frightens me most about volcanoes is their unpredictability.  Scientists can NOT predict if or when a volcano is going to erupt. At Yellowstone, there’s a bevy of scientific instruments scattered around the park measuring ground deformation, seismic activity, etc. Even with all that data, they can’t predict when an eruption will occur.”

There’s more. “Most eruptions are from cinder cone volcanoes, where there’s a small explosion and the lava meanders down the mountain.  An eruption at Yellowstone would be similar to a Hiroshima-size explosion occurring every second. If it does blow again, it will be a global catastrophe, not just for us here in the states. Global temps would plummet launching a famine unlike anything the world has ever seen.”

Washburn reckons that the disaster format not only suits his style of writing but actually helps him to write. “It acts as a vehicle to propel the story forward. I don’t think I could write a book where the story continues chapter after chapter until finally reaching the climax.  Could be I’m wired different. I’ve tried, but I just can’t do an outline.  I’ve dabbled with Scrivener and other programs, but they’re not for me. When I sit down each morning in front of my computer, I have very little idea what’s going to happen with the scene I’m working on.”

Yet those ideas are percolating all the time. “When I’m writing, I live a dual life, my own and the story I’m writing. It could be I get the spark of an idea while showering or out working in the yard. It happens to me frequently and usually ends up making the story better.  I know this style doesn’t work for everyone, but it works for me.”

And speaking of working, what’s next for Tim Washburn? “I love writing and my only regret is I didn’t start twenty years ago.  I’m a little late to the party, age wise, but I’m here now and plan on staying around for as long as possible. I just agreed to a new two-book contract with my publisher and I’m delighted I can continue working with my editor, Gary Goldstein.  I’m currently writing the third novel and am nearing the finish on the first draft.  The publishing business is hit or miss and highly subjective, but as long as I can provide the reader a small measure of entertainment, I’ll keep writing.” 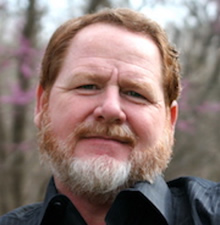 After graduating with a Journalism degree from the University of Oklahoma, Tim Washburn spent several years working in the television business in Oklahoma City and Little Rock, Arkansas.

Tim knew from a young age that he wanted to write, but it wasn’t until several years ago that he turned his focus to writing and found his passion.

Tim Washburn is a member of the International Thriller Writers. He resides in Edmond, Oklahoma, and can often be found on campus cheering on his beloved Oklahoma Sooners.