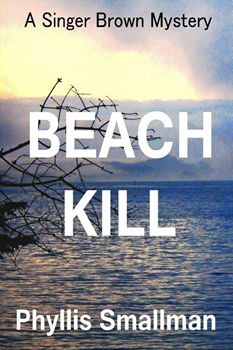 Phyllis Smallman’s debut novel, Margarita Nights, won the inaugural Unhanged Arthur Award from the Crime Writers of Canada, and was short-listed for the Debut Dagger in the U.K. She has been awarded both silver and gold medals by the Independent Publishers book awards in the U.S.  Her work has appeared in Spinetingler and Omni Mystery magazines. She was a potter before turning to a life of crime. She lives on Salt Spring Island, British Columbia.

I asked Smallman a few questions.

Is there anything special you’d like to tell us about BEACH KILL?

The setting is a small island off the west coast of British Columbia.  At the very edge of the continent, and straddling the border of two countries, the Gulf Islands are playgrounds for the very rich.  Policed by the Royal Canadian Mounted Police, with only six officers to handle ten thousand residents and a few thousand visitors, resources are stretched thin.  On this May holiday weekend, the town of Kilborn is full of tourists and pleasure boats for the round-the-island regatta.

Singer Brown is performing at the Driftwood Inn.  After her life on the street, she figures only a dance with an orangutan could shock her.  The music is playing and the waltz begins when the body of a teenage girl is found on Ghost Island.  Singer identifies the remains, attacked first by man and then by nature, by a butterfly tattoo [sic].  Suspicion, toxic and dangerous, poisons the community of Kilborn, corrupting relationships and leaving no one without fear or guilt.  As the skin of civilized decorum is pealed back, secrets and hidden desire are revealed. When a second woman dies, friend turns on friend, and the Mounties race to find the killer before the suspects can sail away.

When I first moved to Salt Spring Island, I met a homeless woman unlike any street person I’d ever met before. She seemed to be a woman right where she wanted to be and doing just what she wanted with her life. She stayed in my mind and slowly I developed a backstory to go with the character. For me, the character always comes before the story.  Then I find the story to explain the character. Singer Brown, my protagonist, lives in her car and sings on the street for money.  She sees things that others miss, knows things that others want hidden.

BEACH KILL is a story of suspicion and loss. In small towns, gossip and rumors destroy lives. Sometimes it takes an outsider to see what’s really happening. Friendship comes in many forms and across social boundaries. Sometimes, it is the only thing we have to cling to.

Was there anything new you discovered or surprised you as you wrote the book?

All of the characters offered surprises as their stories and personalities emerged. That’s part of the writing process, starting with an idea and discovering a story, but it is always the subtle humor which creeps in that catches me by surprise.

An exciting story is always welcome. Set on an island in the Pacific Northwest, this book brings a fresh setting to the genre. The protagonist, a woman who is struggling to pull herself out of homelessness and survive drug and alcohol abuse, has seen the worst of human behavior. She brings a unique and refreshing viewpoint to the literary world.

No spoiler, but what can you tell us that we won’t see on the jacket of the book?

The puzzle is solved in Agatha Christie style. All of the suspects are brought together in one room. Motives and secrets are unraveled, and the person behind two brutal murders is unmasked.

What are you doing to promote your e-book?

My first seven books were traditionally published so this is the first I’ve done on my own. I know promoting e-books is difficult.   I’ll get back to you if I come up with any spectacular marketing concepts, and I’d love to hear from anyone with a plan that works. I am concerned that promoting an ebook can be difficult and would love to hear from anyone who has a plan that works to promote ebooks.

What author influenced your career?

I particularly like the writers from the Golden Age of mystery when the puzzle was the most important part of the crime. In this series, I create a traditional mystery wrapped up with the tension of a modern thriller. The reader will have little time to contemplate the clues before the next piece of action.

What are you working on?

The next Sherri Travis book, Last Call, will be out in 2017.  Sherri is in Key West with her high school friend, Lexi Divine, who manages the Rawhide Saloon.  Beginning with the death of an Elvis impersonator, this holiday does not go as planned. With a hurricane hovering off the Florida coast, Sherri searches desperately for her friend when she fails to return to the bar for last call.

When am I not writing? Part of each day is devoted to writing and dealing with the business side of being a published author, like preparing for workshops or talks. I love giving workshops. My two favorites past times are golf and long walks, which are pretty much the same thing.  Other than that, I read several books a week and devour movies. 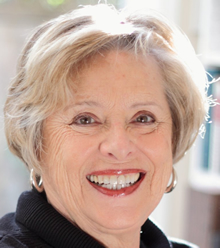 Crime Writers of Canada award winning author, Phyllis Smallman, was short-listed for the Debut Dagger in the UK, and has been awarded both silver and gold medals by the Independent Publishers. She was a potter before turning to a life of crime. She lives on Salt Spring Island, British Columbia, where she golfs badly and writes madly.

To learn more about Phyllis and to read excerpts from her Singer Brown and Sherri Travis book, please visit her website.