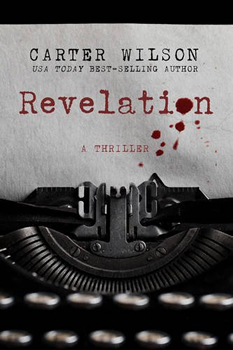 Carter Wilson’s writing style is a bit like asking Jesus to take the wheel. With barely a spark of an idea, he sits at the keyboard and says, “Characters, tell me a story.”

An unabashed pantser, Wilson is comfortable with letting the book unfold organically, allowing himself to get caught up in the plot—and the darkness—without the pressure of following an outline. No one reading over his shoulder. No guidelines on content. Nothing to obstruct the story’s flow.

Things aren’t quite so lucky for Harden Campbell, the protagonist in Wilson’s stunning new thriller, REVELATION. When Harden wakes cold and beaten in a dirt-floor cell, he finds only three things in the room with him: the mutilated corpse of his friend, an antique typewriter, and a stack of blank paper, the top sheet of which someone has typed: Tell me a story.

And unlike Wilson’s writing process, each of Harden’s draft words will be carefully analyzed by his captor—Harden’s old college roommate, Coyote, a sociopath now at the head of a terrifying new religion.

“Writing this book was a little different because I had more of a general idea of what I wanted the story to be about,” Wilson says. “I wanted to know how difficult it would be to start a religion.” 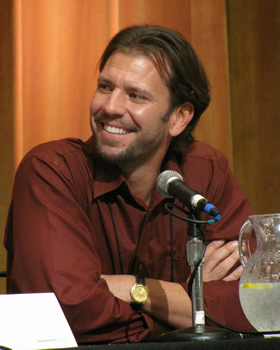 Carter Wilson Speaking on a panel at Bouchercon.

Turns out Coyote isn’t the only college student to give it a try. Back in 2005 Kansas student Bobby Henderson published an alternative to evolution in public school science classes on his website: The Flying Spaghetti Monster as the deity of the Church of Pastafarianism. What may have begun as satire against creationism turned into an Internet phenomenon—the “religion” has received praise from the scientific community and criticism from proponents of intelligent design.

Unfortunately for Hayden, Coyote’s concept of heaven doesn’t include a beer volcano and strippers. In fact, for more than 300 pages, Haden is subjected to his own hell, and at one point is even tormented by people wearing terrifying baby-face masks.

“That’s a bit of a rip off from one of my favorite movies, Brazil,” Wilson says. “It’s scary because it’s something you’re not expecting.”

Scary is a slight understatement. In what has become a bit of a trademark for Wilson’s work, REVELATION takes us deep into his characters’ world, which in this case is quite dark.

“All books are about tension,” Wilson says. And that’s certainly the case in REVELATION. “I like writing about paranoia the most. Not knowing who to trust. The psychological elements. It’s dark yes, but for a reason.”

An avid fan of Halloween—his yard becomes a ghoulish scene of animated props—and books by Stephen King, Wilson says he’s drawn to things that go bump in the night. But when his writing is finished for the day, there are a number of ways he can resurface from that darkness, such as focusing on his photography. 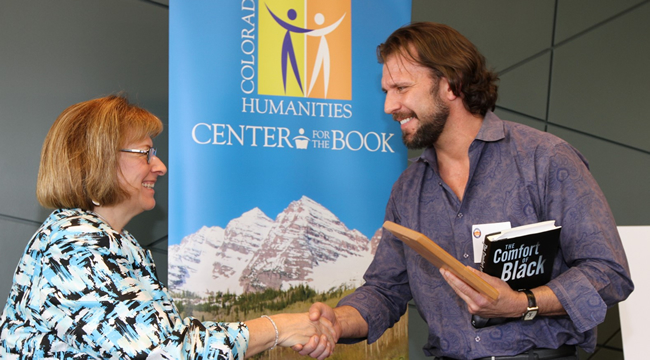 Seeing the world in “pictures” not only feeds Wilson’s creativity, it allows him to write with a visual style that shows each scene, sometimes in terror-inducing detail. REVELATION isn’t a book you should begin at night if you plan on sleeping.

Adding to the fear factor is that the story takes place in the late 80s, harkening back to Wilson’s own college days, a time when technology was less advanced.

“There’s something so innocent and pure about those times,” Wilson says. “I thought about setting it in modern times, but I wanted an environment in which word spread more organically. It’s very freeing to write scenes where there are no cell phones.”

The effect works in REVELATION, but for his yet-untitled 2018 release, Wilson will return to the present for an exciting thriller loosely based on a true story about two young girls that become obsessed with a graphic novel character.

“I’m really excited for it,” he says. “It’s the best thing I’ve ever written.”

Big shoes to fill—REVELATION is a masterful story of suspense. 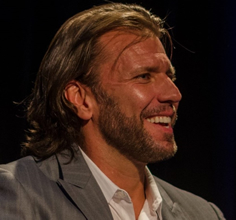 USA Today bestselling author Carter Wilson explores the personal depths of psychological tension and paranoia in his dark thrillers. His novels have received critical acclaim, including starred reviews from Publishers Weekly and Library Journal. Carter’s third novel, The Comfort of Black, won three literary awards, including the 2016 Colorado Book Award (Thriller). His fourth novel, Revelation, will be released in December 2016 by Oceanview. Carter lives outside of Boulder, Colorado with his two children.

To learn more about Carter, please visit his website.