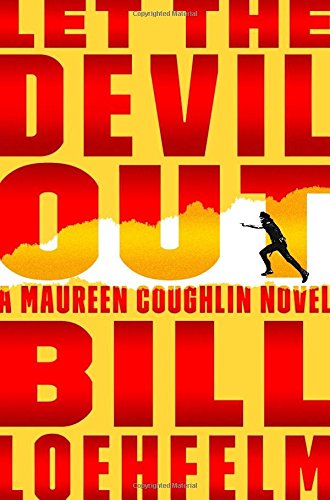 Bill Loehfelm is the author of the critically-acclaimed crime fiction series about New Orleans police officer Maureen Coughlin. In LET THE DEVIL OUT Coughlin has had a brutal year as a rookie cop with New Orleans Police Department. In one year she has experienced her first arrests, her first black eye, and, after a stinging brush with the corrupt heart of her adopted city, her first suspension. She is waiting out the suspension, hoping to keep her badge, hoping to turn things around. Unfortunately, things are about to get much worse.

The FBI is in town on the trail of a ruthless anti-government militia group, the Watchmen Brigade. Nobody in the NOPD wants any part of working with the feds. Guess which suspended rookie is told she doesn’t have a choice.

With the FBI and a white supremacist militia on the loose in New Orleans, the city is one big powder keg. Find out what happens when a brilliant but reckless young cop lights a match. In LET THE DEVIL OUT you will feel the experience of a police ride-along, but you will be at a safe distance.

Mr. Loehfelm spoke with The Big Thrill about his newest novel and his writing career.

How did you catch the writing bug? What authors influenced your writing style?

I first realized I liked writing and had a knack for it early, in grammar school. High school, though, was when I caught the bug for good. I took a creative writing class at a branch of the New York Public library on Saturday mornings. That class set the hook.

As for influences, James Lee Burke is probably the reason I write crime fiction; him, John D. McDonald, and Dennis Lehane are the first crime writers I got into. Them and a childhood spent reading Batman. Kate Atkinson’s Jackson Brodie series has been a huge influence, so big I named a character in the Maureen Coughlin series after her. The Brodie series is what I hold up as a goal or a target. Mystic River was a game-changer for me. I admire the way Laura Lippman makes it seem so effortless. Megan Abbott makes it breathless; her books are like diamonds. Richard Price is a master. James Ellroy is so intense and weird.

You have written novels, but you have also contributed to several anthologies. Is it more difficult to write for an anthology, or to write a full-length novel? Which experience do you enjoy the most?

Writing a novel is harder, it’s way more work, but it’s also my preference. What makes me proudest of my anthology work is the variety. The Books to Die For piece is an essay about Laura Lippman’s book, What the Dead Know. The Staten Island Noir story was written on request. On the other hand, the NOLAfugees stuff is fiction and satire I did for a blog of the same name I contributed to with a lot of other writers in the first years after Katrina.

What is the challenge of writing from a female perspective—especially since the protagonist is a police officer dealing with tough issues?

I really try to avoid writing “from a female perspective” and try to write from Maureen’s perspective. She’s a character I’ve been working with a long time and I feel like I know her really well. I wind her up, let her rip, and try to keep up. As far as the issues, again, I stay true to the person who’s dealing with them. She’s got her talents and her limits, and she hasn’t quite figured out which is which. I let her rage and let her hate and let her fail and contradict herself as she learns.

Tell us a little about LET THE DEVIL OUT.

It puts the capstone on the year of Maureen’s life that began with The Devil She Knows. She catches some things that she’s been chasing, and some things that have been chasing her manage to run her down. That combo proves pretty explosive. It’s a turning point for her, this book, and she has to make very tough decisions about the type of person, and police officer she wants to be.

All writers are different in their perfect creative environment. Where do you prefer to write? What time of day? Do you write every day? How much time do you spend at one sitting?

I’m lucky enough to have a dedicated office, a sunroom on the back of the apartment. I work at night, usually late at night. My wife, she’s also a writer, and she’s a morning person so it works out well. I go into the office around ten or eleven at night, come out around three or four, on a good night. How often I write depends on where I’m at with a project. They tend to gather momentum as they go along.

Summer is coming upon us quickly, and with that, the allure of outside activities.  What strategies do you use to keep your “butt glued to the chair?”

I do most of my writing in the fall and winter; that’s one way. I do all right with discipline. I don’t feel right if I go too long without working, so I stay pretty motivated.

What is the best piece of advice you can give upcoming writers concerning habits?

The first thing is read, read, read. Drown yourself in how others do it. And prioritize. Be serious about the things you need to get good work done, and make sure you have those things. Don’t wait for them; take them. I’m at my best working through the night in my office, the music loud in my headphones, and pretty much the entire rest of my life is built around me being able to do that. Don’t wait for someone else to care about your writing life, to give you permission. You’ll wait forever. 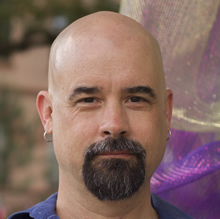 Bill Loehfelm is the author of the critically-acclaimed crime fiction series about New Orleans police officer Maureen Coughlin, which includes the novels, Doing the Devil’s Work, The Devil in Her Way, and The Devil She Knows, as well as the stand alone novels, Bloodroot, and Fresh Kills.

Born in Park Slope, Bill grew up in Brooklyn and on Staten Island. After college in Scranton, PA, where he studied communications and English, he taught high school English on Staten Island. In 1997, he moved to New Orleans, where he has taught high school and college, worked in an antique shop, and done absolutely everything there is to do in the bar and restaurant business (except cook). He received his MA from the University of New Orleans in 2005.

Bill lives in New Orleans with his wife, AC Lambeth, a writer and yoga instructor, and their two dogs.