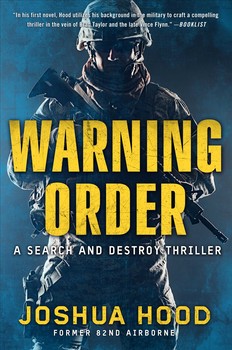 Joshua Hood may be a relative newcomer to the ranks of published authors, but he is one of those rare thriller writers who has lived more than a few of the experiences described in his military fiction.

Jumping out of airplanes? Check.

Duty in Iraq and Afghanistan? Check.

He served with the 82nd Airborne for five years, which included missions in Iraq and Afghanistan. He was decorated for valor in Operation Enduring Freedom in Afghanistan. Now out of the military, his day job still involves its share of excitement as a full-time member of the Memphis SWAT team.

Even while living the life of a thriller character, he never gave up on wanting to be a storyteller.

“I’ve always wanted to be a writer,” he said in a recent interview. “Very early on I developed this love for the written word. Being from the South, I think we’re all kind of natural storytellers.”

In WARNING ORDER, protagonist Mason Kane and other covert operators are in Syria, battling ISIS operatives. It is hard to know who to trust and where loyalties lie. This seems to be true among the American military operatives as well—the plot twists will keep readers off balance. Bullets fly off the pages of the urban combat scenes, described in graphic detail with the accuracy of someone who has been there. It’s worth noting that Kane has a particular skill with a custom-made combat knife.

The action is fast-paced, realistic, and tells a story that begins where the headlines end.

“There is no clear path to victory,” the author noted of the real-life situation.

At the same time, he wanted to create authenticity in his writing and pay homage to the soldiers who are fighting these battles today.

“I wanted Mason Kane to be as realistic as possible,” he said. His character  can have a hard time readjusting to “normal” life after a violent mission. “It’s kind of a dark place to go, but there are people out there who have shared this experience. To paraphrase Nietzsche, ‘If you spend enough time hunting monsters, you become one.’ ”

Growing up, he read anything he could get his hands on, thanks to a library card and a family that encouraged reading. Before joining the military, he was an English major at the University of Memphis.

The first thriller he read (if you don’t count The Iliad and The Odyssey, The Three Musketeers, The Count of Monte Cristo, and The Scarlett Pimpernel, all of which he read as a kid) was Eye of the Storm by Jack Higgins. “He is so good at taking these things that happened (such as the IRA mortar attack on Number Ten Downing Street) and building a story around them,” Hood said.

Drawing on an amazing knowledge of military history, Hood makes these same connections with current events. He posits that the current war on terrorism is repeating a cycle of conflict that began as far back as the Crusades.

The books he read in his youth, and his experiences in the military, have been encouragement to write his own thrillers. Before his new book, WARNING ORDER, there was Clear by Fire. He said that he learned a lot about the craft of writing with that book, particularly the need to create at least a rough outline of where the story is going.

“If I don’t know where I’m going I tend to get lost,” he said. He also carries a notebook to jot down ideas.

“Writing is a lot like golf,” he said. “Just when you think you’re good at this, you go out and have a terrible day.”

Hood said he has focused a lot on improving his craft as a writer, particularly because he wants readers to have a great experience with one of his books.

“I’m making a contract with every reader,” he said.

His efforts are being noticed. One of the bestselling authors who provided a blurb for WARNING ORDER was Ted Bell, who is no stranger to action and international intrigue in his own bestsellers. Bell wrote: “There are the guys who’ve been there, and the guys who haven’t. Joshua Hood’s been there, and it shows on every page. Helluva fine writer.”

Such praise set Hood’s head spinning. “It’s still a daydream,” he said of his writing success.

It also turns out that the particular skill set of this 36-year-old, polite and soft-spoken author includes woodworking. Before he settled down to write, he built his own desk from scratch.

“In my mind, it’s all about being a craftsman,” he explained. “I have a connection not only to what I’m writing, but what I’m writing on. It’s like a grounding principle.”

Joshua Hood graduated from the University of Memphis before joining the military and spending five years in the 82nd Airborne Division, where he was team leader in the 3-504 Parachute Infantry Regiment. In 2005, he was sent to Iraq and conducted combat operations in support of Operation Iraqi Freedom from 2005–2006. From 2007 to 2008 he served as a squad leader in the 1-508th Parachute Infantry Regiment and was deployed to Afghanistan for Operation Enduring Freedom. Hood was decorated for valor in Operation Furious Pursuit. He is currently a member of a full time SWAT team in Memphis, Tennessee, and has conducted countless stateside operations with the FBI, ATF, DEA, Secret Service, and US Marshals.

To learn more about Joshua, please visit his website.