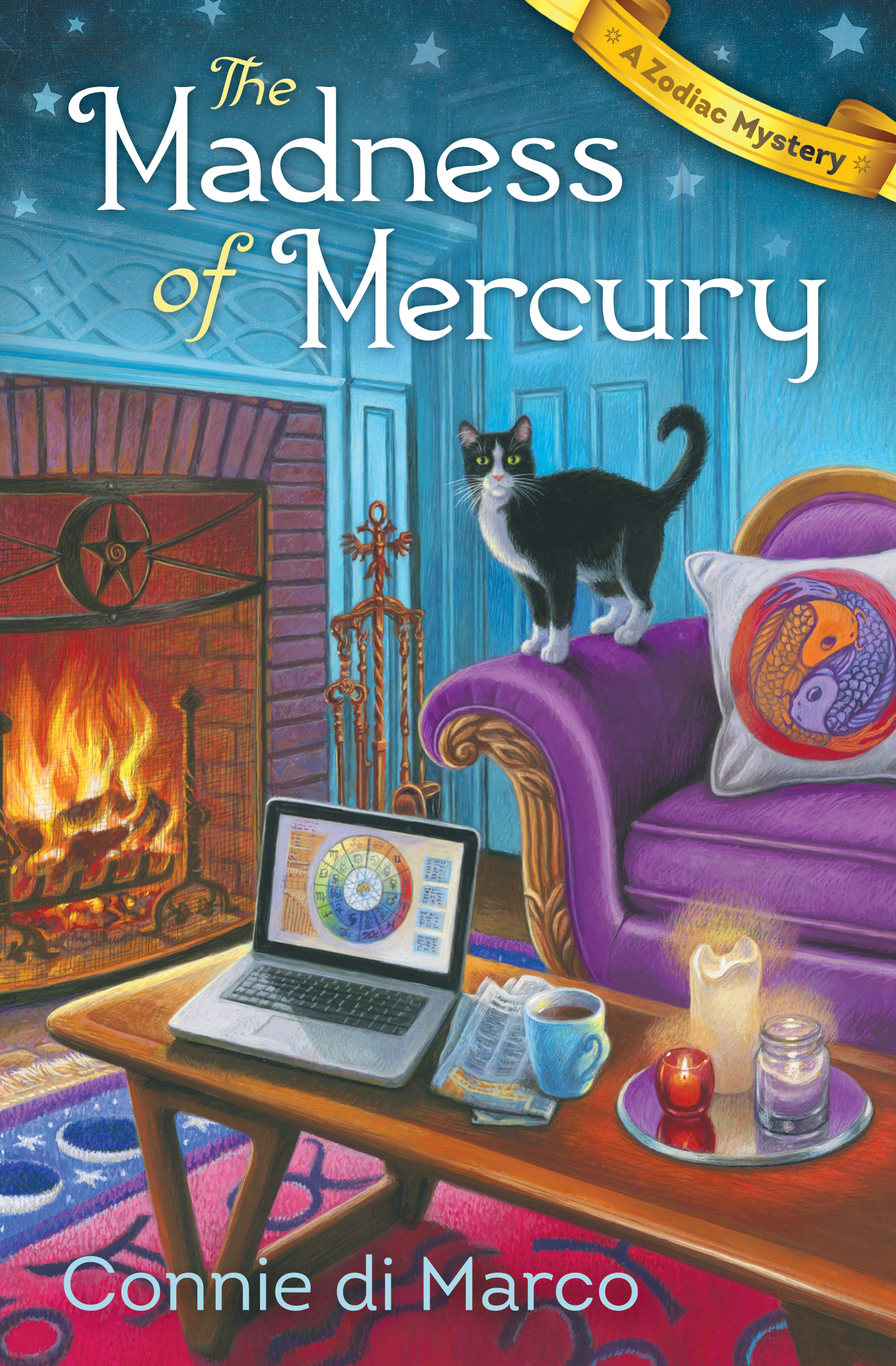 Now writing under her own name, she has started the Zodiac mystery series featuring professional astrologer and amateur sleuth Julia Bonati.

DiMarco is happy to turn from lighter cozies to “cozy noir.” It’s closer to the kind of books she liked to read when she was in high school: the James Bond series by Ian Fleming. She loved the James Bond character so much that she learned how to play baccarat.

Bond always finds a way out of any desperate situation. “James bond has all these gadgets and doodads,” she says. “But when push comes to shove, its always mano-a-mano for him. All the artificial things drop away and James is on his own.” The book that impressed her the most was On Her Majesty’s Secret Service. ”That was the book in which James questions if he wants to continue [as a secret agent]. He falls in love and his wife is killed. It was so out of keeping with the usual fare, James was heartbroken and vulnerable. The shock of her death has always stayed with me.”

DiMarco found her agent, Paige Wheeler (at that time with Folio Literary), after cold-querying with an initial darker novel. While waiting for her own book to sell, Wheeler asked her if she would be interested in doing a work-for-hire. “I didn’t even know that that was,” says DiMarco. “But it was for Berkley, so of course I said yes.” Berkley sent her a concept, a one-page bible, and asked her to write some sample chapters. “They wanted the soup shop in Vermont, but the plot as they outlined it had a very dark tone. The protagonist had just lost her parents, it started in the darkest, deadliest part of winter. I decided that what the series needed was a little humor. They liked that and hired me to write the series.” She used the name Connier Archer, as Penguin retained the rights to the author name.

“In a series it’s important to have your characters evolve, not just chronologically, but emotionally.” The Soup Series amateur sleuth is Lucky Jamieson, the owner of a soup shop who has a personal relationship with most of the village’s residents. This gives her a natural “in” when it comes to solving murders. “I was a total novice when it came to writing a series. This is what I did, almost unconsciously: in each book, when evil arrived in the village it came from the outside. But it was connected to one of the core characters and some of [that character’s] secrets are revealed. A main character is introduced in the first book and some secondary characters, and one of the secondary characters becomes the lead in the next book and so on.”

With the Penguin-Random House merger, the future of the Berkley imprint was unclear. DiMarco found a home with Midnight Ink, for a new series that pits her amateur sleuth against corrupt aspects of society. In the first book, THE MADNESS OF MERCURY, Julia becomes the target of a power-hungry preacher and his radical followers who believe that anyone who speaks against him is an “abomination unto the Lord.” Julia, and later one of her clients, is targeted by the cult. In the action-packed finale Julia puts on a disguise, breaks into the compound, frees her client, gets caught, and breaks out again.

“I like to wind up my novels with death-defying scenes, like in Clive Cussler’s Dirk Pitt books or the James Bond novels,” says DiMarco. “It’s important to make the reader believe that they might not succeed.”

In spite of the thriller ending, DiMarco’s novels are mysteries. “When you write a mystery [you have a contract with the reader.] It’s important to leave clue(s) the perceptive reader can pick up. In a thriller you know who the bad guy is from the beginning; the question is how to catch them. And in suspense the danger is more psychological, emotional. But sometimes one book can be all three.”

THE MADNESS OF MERCURY is a contemporary murder mystery, but the preacher and his followers are based on the Reverend Jones and Jonestown in the 1970s. Although there are fewer bodies in THE MADNESS OF MERCURY than there are in the Soup Lover mysteries, the overall tone is darker, the world is darker, social institutions are darker, so it make sense that one way to shed light on things is to use astrology.

As an astrologer, Julia Bonati comes into contact with all sorts of people, and she is instantly privy to their most personal concerns, whether it’s because they share their concerns with her or she sees it in their chart. The books are not paranormals, although occult practices like a séance are featured in key scenes.  Julia’s closest friends run a shop that specializes in occult objects. “The books aren’t about astrology,” DiMarco says. “They are about the psychology of a murderer.” A psychology often expressed in astrological terms.

DiMarco herself has learned a lot about astrology, but she is not a professional astrologer. She works hard at building up Julia’s past and her inner life: she’s an orphan who grew up with her grandmother in North Beach, an Italian section of San Francisco. “Julia never planned on having a very exciting life. She went to school, loved her grandmother, always felt she was that orphan child with her nose pressed against the glass looking in on a family scene.”

DiMarco has already written the sequel, entitled Dark Sun. So things are about to get more exciting for Julia, and for her readers.

Connie di Marco is the author of The Madness of Mercury, first in the Zodiac Mysteries from Midnight Ink. Writing as Connie Archer, she is also the national bestselling author of the Soup Lover’s Mystery series from Berkley Prime Crime. Some of her favorite recipes can be found in The Cozy Cookbook and The Mystery Writers of America Cookbook. Connie is a member of International Thriller Writers, Mystery Writers of America and Sisters in Crime.