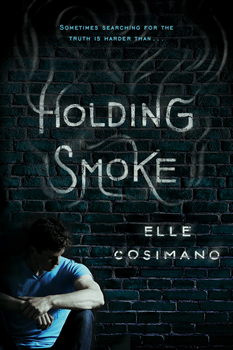 It’s been weeks since the last yard brawl, and every one of us is twitchy, ready to jump out of our skins.

It’s also an apt description for how Cosimano felt before she dropped nearly everything else in her life and became a writer, three books ago. Back then she had it all: a husband and two boys, a 60-hour-a-week job selling real estate, and a big house in the Washington, D.C. suburbs filled with designer touches and a home theatre.

Her misery with her “stuff, stuff and more stuff” lifestyle was brought home when she attended a real estate event with 100 other realtors. A trust exercise required them to tell each other something interesting about themselves.

Cosimano realized that in spite of everything she had, she had nothing interesting to say about herself. So she blurted out, “I’m writing a novel.” Then watched, horrified, as over 100 realtors wrote that down on their Bingo cards.

Now she had to do it. She accepted her mother’s invitation to take the boys to the Mayan Riviera. For a whole summer, while her mother watched the children, Cosimano wrote, delivering her mother a new chapter by the end of every eight-hour day.

When she came home and told her husband she wanted to switch careers, he asked, “Are you good at this?” Cosimano wasn’t sure; she’d majored in psychology, which had helped her in her sales career, but had no specific training in creative writing.

She went to the Big Sur writers workshop sponsored by Andrea Brown, a children’s literary agency. “I got a lot of amazing feedback and came back determined to see it through.”

Within a few months she’s signed with Sarah Davis at the Green House Literary Agency (found through cold query.) Her agent made her spend a year revising her first book, Nearly Gone, which finally sold in a two-book deal.

She quit her job and moved her family to the Mayan Riviera, which enabled her to write and spend more time with her children.

Nearly Gone is now on four state reading lists. It won multiple awards, including Edgar Award Finalist and the International Thriller Award for Best Young Adult Novel. But Cosimano knew she needed more training. The Nevada branch of SCBWI had a mentorship program.

To apply to be a mentee in the SCBWI mentorship program, she had to send in a 30-page sample from a completed manuscript. In two weeks, she put together just enough to submit, thinking she would have time later if it panned out. When the rest was requested, she had to write the entire book quickly. “The boys were younger then. And I can’t write in pieces, I need large blocks of time to write. So I would go to a hotel on weekends, write from Thursday night through Sunday night all through the winter of 2011-2012, until I got it done.”

Cosimano is filled with praise for her mentor, Ellen Hopkins, a New York Times bestselling author for young adults, who she worked with for a year. “She was incredible.”

HOLDING SMOKE is set in Denver partly because Cosimano needed a place she didn’t have to visit for research. “I lived in Denver for two years and fell in love with it. For the story I needed a city with a large facility for youthful offenders, a place where the hero can conceivably get around on foot.” A friend in Denver helped her fill in knowledge gaps. So did Google Earth.

Cosimano is a big fan of writing retreats, either weekend writing retreats on her own or with a critique partner/writing buddy. Her books are “contemporary realism mysteries with a pinch of paranormal.” This is true of HOLDING SMOKE, whose hero, locked in a prison for juveniles, escapes at will through astral travel.

HOLDING SMOKE includes a white-knuckle scene where an innocent teen is under threat from a corrupt prison guard who comes to her house. Cosimano experienced real fear when she did a four-hour ride-along as part of the Writer’s Police Academy. She accompanied a Deputy from the Guilford County Sheriff’s Office in North Carolina on a relatively quiet Thursday night.

During those four hours, the Deputy attempted to fulfill an outstanding arrest warrant, issued a traffic citation, and responded to a domestic dispute.  Cosimano had to remain in the car during these interactions for her own safety.

“Every time the Deputy got out of the patrol car, my heart was in my throat,” she says. “Domestic disputes can escalate and become violent. Reckless drivers can be unpredictable, and approaching their vehicle in the dark on an empty country road is a very tense moment. And approaching the home of an individual evading arrest poses countless risks. In the span of only one night, every officer puts his or her life on the line several times.”

HOLDING SMOKE was optioned by Penguin, but they didn’t pick it up. “They were probably expecting something very different.” Her agent then submitted it widely and received multiple offers. Cosimano eventually decided to go with Disney Hyperion. “The editor at Disney Hyperion and her entire team gave me amazing feedback, so I knew the book had found its home.”

Cosimano’s own kids aren’t allowed to read her books — yet. “I’ll give them the books when they are fourteen.” 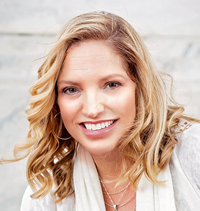 Elle Cosimano grew up in the Washington, DC suburbs, the daughter of a maximum security prison warden and an elementary school teacher who rode a Harley. Elle set aside a successful real-estate career to pursue writing. Her debut thriller NEARLY GONE was a 2015 Edgar Award Finalist, and winner of the ITW 2015 International Thriller Award for Best Young Adult Novel. She lives with her husband and two sons between the jungle and the sea in Mexico.