A Reporter Who Storms Off the Ladies’ Page 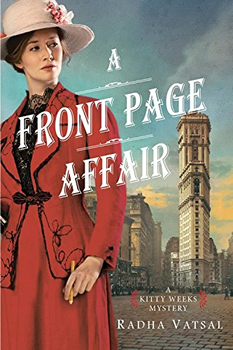 Reading a well-crafted historical mystery is always a pleasure and with A FRONT PAGE AFFAIR, Radha Vatsal delivers precisely that. The novel is set in 1915 in a New York City that is going through turbulent times, with shocking events on its own doorstep such as the shooting at J.P Morgan’s mansion, and tragedies abroad: the sinking of the Lusitania and the outbreak of the Great War. In this pre-television, radio and social media world, newspapers play a vital role in relaying the news of the day.

Enter Vatsal’s Capability “Kitty” Weeks, a young woman of privileged background who has little time for the restrictions of her class and gender, and who would love nothing more than to report on the important stories. But serious journalism is only for male reporters. A deeply frustrated Kitty is confined to writing about fashion and society gossip on the Ladies’ Page.

Fate provides Kitty with a gruesome opportunity when a man is murdered at a high society picnic on her beat. She is given the story and is soon embroiled in its solving and in a wartime conspiracy that threatens to derail the United States’ attempt to remain neutral in a world at war.

Kitty is a likeable and courageous heroine who isn’t afraid to push all sorts of boundaries. Vatsal says she partly drew inspiration for her from contemporary women who were real life boundary-pushers. “Kitty has characteristics like courage, persistence, and love of adventure that she shares with the action-film actresses of the 1910s, like Pearl White, whom she admires.”

The reader gets a real sense of Vatsal’s affection for the city and her deep interest in its past. And although she lives in New York, it hasn’t always been her home, which partly informs Kitty’s character. “Like me, Kitty went to boarding school and comes to New York with an outsider’s perspective.” Vatsal uses this to her advantage. “I think I ask more questions and I don’t take anything for granted.  I want to know why things are the way they are and how they came to be that way—in that respect also, Kitty’s character is similar to my own.  New York is a fantastic city to write about, because every little detail seems to have an unexpected story behind it.”

Researching widely helps to yield these historical nuggets. “I love reading primary sources.  I get caught up in everything—even advertisements give me ideas.” Her interweaving of fact with her fiction is deftly done. I loved the references to the Harry Thaw case, where Kitty’s editor warns her not to emulate that style of writing. It refers to the infamous 1906 case of millionaire Harry Thaw, who murdered architect Stanford White in a jealous rage over Thaw’s actress wife, Evelyn Nesbit. The high-society trials (there was more than one) were in the nation’s headlines for more than a year. Much of the coverage was delivered by the fabulously named Sob Sisters. “The Sob Sisters were four women journalists who worked for the more “sensational” newspapers,” explains Vatsal, “and they, along with Evelyn Nesbit, Thaw’s wife, were the only women allowed by the judge in the courtroom during the lurid trial. Women weren’t even allowed to serve on the jury at the time. He decided that Nesbit’s testimony wasn’t fit for female ears.  It was a case involving sex, drugs, murder.”

As well as colorful detail and references, Vatsal says that she uses history itself in creating her plots. “I choose the historical moments that anchor the story first, then plot carefully, and then try to forget all my plotting so that unexpected things can happen. I really need to have anchors along the way though—they can change, but I need them to be there—or I would be too daunted to begin writing.”

Something that is also perhaps a little nerve racking is the fact that A FRONT PAGE AFFAIR is Vatsal’s debut novel. But after the work she has put in, Vatsal is loving it. “It feels great.  There’s nothing quite like it after working on my own for so long.  Learning when to stop and send the manuscript out into the world was a huge challenge for me—and then figuring out where the book fits into the market so I could look for an agent.  In retrospect, it all looks pretty obvious but at the time I had no idea where to start.”

And starting is no longer a problem. Vatsal and Kitty are well on the road to the next book. “In my mind, Kitty’s always been a series character and I’ve tried to create a world that readers will enjoy coming back to over the course of several installments.  I’m almost done with a draft of book two, in which Kitty investigates a murder over the winter of 1915-16.  It will come out next year.” 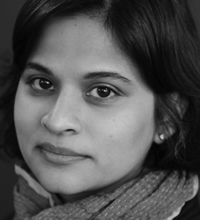 Radha Vatsal grew up in Mumbai, India, and came to the United States to attend boarding school when she was sixteen. She has stayed here ever since. Her fascination with the 1910s began when she studied women filmmakers and action-film heroines of silent cinema at Duke University, where she earned her Ph.D. from the English Department. A Front Page Affair is her first novel. Radha lives with her husband and two daughters in New York City.

To learn more about Radha, please visit her website.